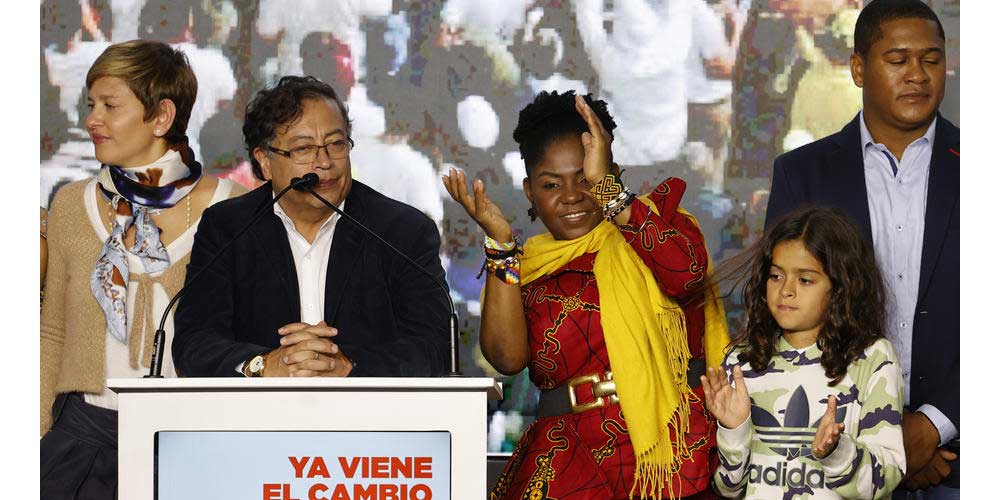 THE VICTORY of Gustavo Petro and Francia Márquez in the elections for president and vice president in Colombia was greeted with rejoicing on the streets.

This is another success for the so-called ‘new Pink Tide’, adding to a list which now includes Andrés Manuel López Obrador, ‘AMLO’, in Mexico, Alberto Fernandez in Argentina, Luis Arce in Bolivia, Gabriel Boric in Chile and Pedro Castillo in Peru.

The election marks the end of Colombia’s long domination by hard right forces, symbolised by former president Alavaro Uribe, when Colombia was the base for undermining left wing governments in other parts of the continent. This period included a 50-year war fought by successive governments, backed by brutal right wing paramilitaries, against Revolutionary Armed Forces of Columbia (FARC) and National Liberation Army (ELN) guerrillas.

Left and right
The shift to the left is a product of the mass popular uprisings of 2019 and 2021 against Iván Duque’s hated government. Police and military officers murdered more than 80 people during the Paro Nacional (National Strike) of 2021.

There has been a sharp fall in the living standards of millions of people as a result of inflation. The country had one of the highest covid mortality rates in the region, with 140,000 deaths, according to official data.

In the same period 3.6 million Colombians were thrown into poverty, with unemployment reaching an all-time high last year.

The Pacto Historico, Petro’s left populist electoral coalition, carried the entire Caribbean and Pacific Coasts with big majorities. Nevertheless, the Colombian Right remains extremely powerful, not only because of the 48% vote for their candidate, Rodolfo Hernández, but because of their institutional support in the army and the police, in addition to the murderous right wing paramilitaries.

Petro is the founder and leader of Colombia Humana, a party originating in the Bogotá mayoralty elections of 2011, which he won. After completing his term of office, he stood for the presidency of the Republic in the 2018 elections, but was blocked by the electoral commission. The party was the target of paramilitary gangs like the Black Eagles, with nearly a dozen activists assassinated in 2020 alone.

Another major factor blocking change in Colombia is the grip of the US on the country’s repressive institutions. Colombia has been the base for US interventions in many South American countries since the 1960s, including in neighbouring Venezuela under both Hugo Chavez and Nicolas Maduro.

On 20 May Joe Biden designated Colombia ‘a major non-Nato ally’ and promised continued US funding and security cooperation for the country’s armed forces. Two days after his election president-elect Petro tweeted, ‘On the road to a more intense and normal diplomatic relationship I have just held a very friendly conversation with US President Biden’.

Pale pink
Petro’s politics, despite his membership of the M-19 guerrilla group in the 1980s, have long evolved into a respectable electoralism. Indeed like other new pink tide leaders, he is no longer talking of ‘socialism of the 21st century’ but rather of the need for ‘real capitalist development’ for Colombia. He claims that his goal is not socialism but rather overcoming the ‘pre-modern’, ‘feudal’, and ‘slave-owning’ aspects of Columbian society.

This is no new idea, but a version of the old stages theory of Stalinism. It also involves yet another Stalinist strategy, the ‘popular front’, that is, reforms to be carried out courtesy of progressive sectors of the bourgeoisie. Along that line, he has talked of choosing ‘technocratic’ leaders to ensure economic policies that win the approval of the IMF and World Bank.

This does not bode well for his manifesto promises, like universal free healthcare, that his popular mass base voted for. An additional restraint on the new regime’s social policies is the fact that Petro and Márquez will not have a working majority in the legislature.

The labour, peasant and student union leaderships diverted the two National Strikes away from the revolutionary overthrow of the Duque government (let alone any assault on corrupt and murderous Colombian capitalism) towards supporting Petro’s candidacy. Many young activists from this movement are still languishing in jail. Petro has not yet responded to calls for their release, even referring to demonstrators as ‘rioters’.

It is certain that in the coming months Petro and Márquez will disappoint and alienate their followers, like their pink tide equivalents across the continent. For a second time, left populism will show that its policies of class collaboration, based on ‘humanising’ capitalism, simply will not work.

What now?
At the moment, the employers are talking sweetly of welcoming Petro and cooperating with him, but in a period of growing economic crisis the capitalists will sabotage anything positive his government attempts. As always the IMF will apply harsh conditions on any rescue packages that may be necessary. In response Petro will inevitably make concession after concession.

The only answer for the working class, peasants and indigenous populations is to resume the mobilisations, the National Strikes, demanding a programme of radical solutions to the economic, social and environmental crises at the expense of the bankers, businessmen and landowners. However, this can only be achieved through the overthrow of capitalist and imperialist domination.

The committees and popular assemblies that mobilised for the National Strikes need to be revived and become independent organisers of the struggles to force Petro and Márquez to fulfil their more radical promises. They therefore need to be independent of the Colombia Humana government and the union bureaucracy which collaborates with them.

Such grassroots bodies will also have to become capable of defending themselves and resisting the bosses’ sabotage and continued repression by the murderous gangs. This means building defence groups. For all of this, a revolutionary workers’ party must be organised to lead the struggle.