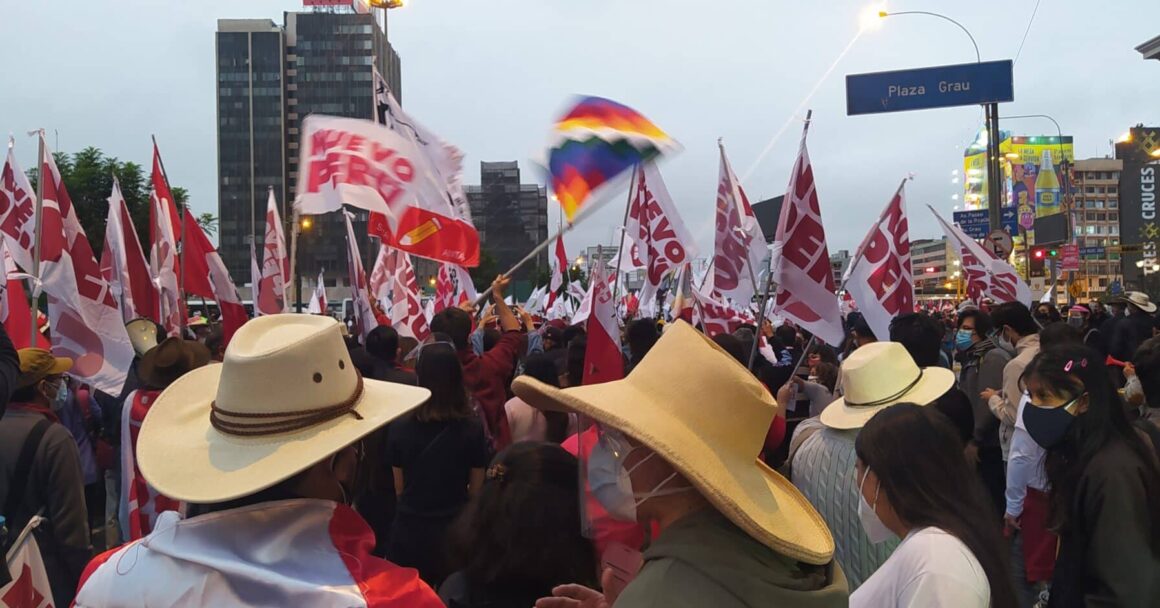 On 6 June, Pedro Castillo won the popular vote in the presidential elections in Peru. However, the margins were extremely close, with Castillo only gaining 43,000 votes more than the other candidate, Keiko Fujimori. Numerous electoral bodies and international observers have confirmed the legitimacy of the vote, yet the electoral authorities have refused to announce the winner so far. This has led to a sharp rise in tensions in the polarised nation, with daily demonstrations by left-wing supporters of Castillo facing off against demonstrations of the far-right.

The delay is mainly due to the refusal of Fujimori to accept the result, despite providing no evidence as to why it is illegitimate. Much like Trump during the US elections, Fujimori is now using an army of lawyers to mount a vast number of legal challenges to the results, attempting to throw out the votes from Peru’s rural indigenous-dominated regions that overwhelmingly support the left.

The real purpose of these challenges is to cast doubt on the legitimacy of the president, helping right-wing forces to sabotage any progressive measures, and even eventually overthrow the government. But it appears this may not be necessary, as Castillo is already falling over himself to backtrack on the popular policies that won him the support of Peru’s workers, poor and indigenous peoples.

The centerpiece of Castillo’s campaign was to call a constituent assembly to rewrite the 1993 constitution. He has now watered down this pledge to merely hoping that parliament will call a referendum on the constitution, which is unlikely to happen as he lacks an overall majority in the house. He has also spoken about the nationalisation of Peru’s rich natural resources that historically have been plundered by foreign capitalist corporations, but has increasingly retreated from this, meeting with several business leaders to reassure them. He now merely promises a ‘renegotiation’ around tax instead. His widely expected future economic minister said, in contrast to the party’s programme, there would be ‘no expropriations, nationalisations or confiscations’.

Despite these predictable waverings, Castillo’s election still represents a blow to the right that has inspired millions. Keiko Fujimori is the daughter of former dictator, Alberto Fujimori, who is currently serving a 25 year sentence for human rights abuses and corruption during his time in office. Now, Keiko is also facing prison for taking bribes. A victory for her would have meant parliamentary immunity and a pardon for her murderous father. More importantly for the ruling class, in a country that has seen the highest per capita deaths in the world from Covid, where the economy has shrunk 11% and 9 million jobs have been lost, it would have put in place a loyal government willing to make the poor pay for the pandemic and its economic fallout.

It is true that these same capitalists will expect Castillo to carry out these attacks – this has no doubt been the subject of the various business meetings and the subsequent watering down of Castillo’s programme. But, the major difference is that Castillo was largely voted for because he has been a militant, leading teacher’s strikes in opposition to the bosses and union leaders. Millions of Peruvians hold illusions that his self-proclaimed socialist party, Free Peru, will enact real changes to their lives by challenging capitalism.

Therefore, it is necessary for socialists to get involved in the movement, whilst holding no illusions in Castillo, and warning the masses of a potential betrayal. They should demand, as publicly as possible, that the new government honour its commitments and carry out real reforms. Currently, despite the party’s self-proclaimed Marxism, the official policy is an alliance with imaginary ‘democratic capitalists’ to develop the nation in a more egalitarian way. This is not possible when the ruling class is beholden to imperialist powers that are not interested in development but in the ruthless exploitation of Peru’s people and resources.

It is imperative for revolutionary socialists to fight within the movement, to demand a break with the ruling class and to expand the current demands into ones that challenge capitalism – nationalisation under workers control, self defence carried out by the unions and indigenous groups and direct democracy based in the factories, field and neighbourhoods. Through putting forward genuine socialist demands the movement can force Castillo to make good on his promises, or expose his vacillations if he refuses, thereby breaking illusions in his party and paving the way for the formation of a true revolutionary party to take up the struggle to overthrow capitalism.