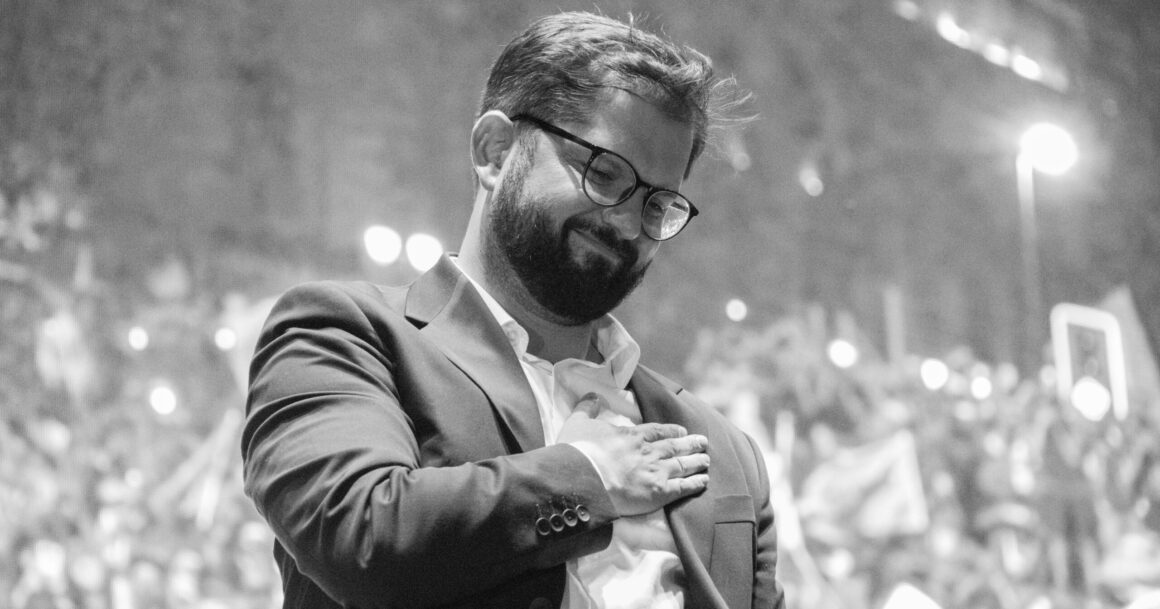 Chile’s prsident-elect Gabriel Boric revealed the first signs of what his government, which takes office on 11 March, will look like when he announced his cabinet on 21 January.

While a majority of female ministers may please some, the inclusion of neoliberal banker Mario Marcel as finance minister and establishment politician Marcela Hernando as mining minister will worry most of his rank and file supporters. As academic Miguel Lopez told Reuters, ‘It’s all linked to a much more centrist, more pragmatic shift in terms of what Boric wants to do in his government.’

Chile’s financial markets and the peso strengthened on hearing the news.

On 19 December 2021, Gabriel Boric defeated José Antonio Kast in the second round of Chile’s presidential election, obtaining 56% of the votes. Voter turnout, also 56%, was the highest since the ending of compulsory voting in 2012.

Although the centre ground was crushed in the election, the claim that this was a battle between two extremes is untrue. In the case of Kast, yes there was an extreme, but Boric is in effect a classic democratic socialist, albeit without a party label. Plainly the threat of a Chilean Bolsonaro mobilised progressive voters to defeat the champion of Pinochet-style dictatorship and neoliberal impoverishment.

Nevertheless, it was completely correct for all those on the left to vote for Boric. Not only did it block the ascent of a vicious right winger to power, but it also puts Boric himself to the test of office. Raising the morale and confidence of his supporters will create the best conditions for the renewal of the mass mobilisation for progressive economic and political demands which will undoubtedly be necessary.

That means not waiting for Boric to decide on the tempo of his programme and certainly not accepting compromises with the right. It means building up and organising the working class and the youth movement that has mobilised huge numbers on the streets since 2019 and laid the basis for sweeping away the Pinochet Constitution and the election of a young Leftist.

Chileans who can remember Salvador Allende’s presidency (1970-73) which ended with his murder and Pinochet’s dictatorship (1973-90) know that electing a left government is not the end of the story or necessarily the beginning of happier days.

That dictatorship, which Kast praised, was one of the bloodiest of the 1970s: 3,000 killed or ‘disappeared’; 28,000 arrested, tortured and raped; 200,000 forced into exile. Just as in Franco’s Spain and Videla’s Argentina, Pinochet and his killers were never brought to justice. And for the same reason, the United States and Western democracies continued to support him because of his brutal imposition of neoliberal policies.

Kast’s 44% of the vote shows that those who benefited from the dictatorship have not disappeared. Another surviving legacy of those years is a right wing military and police force, no doubt prepared to block any seriously radical programme. Although economic growth will reach 12% this year, after shrinking 5.8% in 2020, the OECD points out this is a short term boost from stimulus packages and expects it to fall to just 2% by 2023. No doubt both Chilean and foreign capital will already be planning how to sabotage any progressive policies following Boric’s election.

The danger is, however, that Boric will tread the path of reaching out to Kast’s supporters in the name of healing the rift between Chileans. The price of such compromise will be the dumping of all the radical elements in his programme, especially taxing the rich to pay for social reforms. This could demoralise and demobilise the mass movements if there is no concerted opposition from the unions and the left.

On the other hand, should he attempt the ‘great reforms’ that he promised, we can expect sabotage and disruption in Congress and in economic life. The US and the IMF will start to accuse Boric of human rights abuses and being a dictator. Chile, although a relatively advanced economy, nonetheless remains a semi-colony, potentially subject to sanctions and blockades were it tempted to follow the ‘Bolivarian’ road of Hugo Chavez.

The Chilean left and all progressive and democratic forces that voted for Boric will need to mobilise once more on the streets and in the workplace, raising their own demands, and ready for absolutely anything from their enemies. More than that, young leftists will have to recover the revolutionary traditions of the 20th century and slough off the compromising and pacifist traditions of ‘democratic socialism’.

Chilean capitalists, armed with their military and police forces and, standing behind them, the CIA, are real tigers who will not be peacefully robbed of their teeth and their claws by electoral mandates and bourgeois democracy.