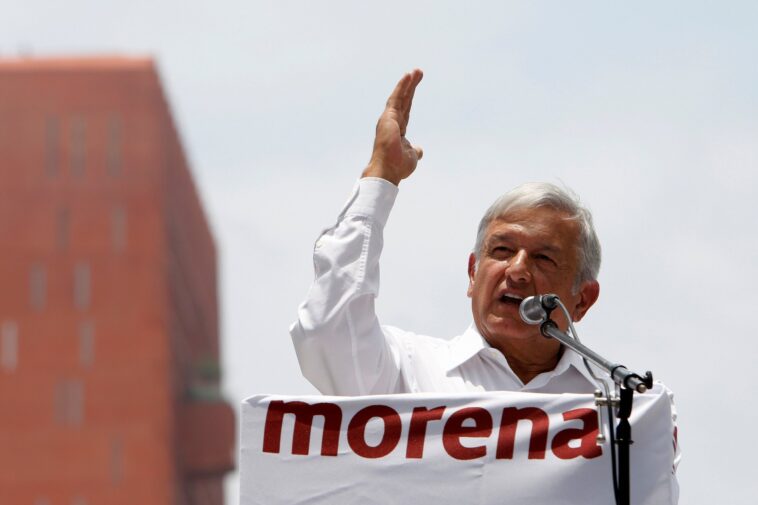 What are the prospects for AMLO’s “Mexican revolution”?

THE LANDSLIDE victory on 1 July of Andrés Manuel López Obrador, known as AMLO for short, with over 24 million votes and 53 percent of the vote, was a humiliation for the traditional parties of the corrupt and repressive Mexican elite. Particularly well-deserved was the fate of the Institutional Revolutionary Party, the PRI, of outgoing President Enrique Peña Nieto and the National Action Party, PAN, of former president Vicente Fox. The PRI ruled the country without a break from 1929-2000.

López Obrador won as the candidate of the Movement for National Regeneration, MORENA, and a broader coalition of other parties notably the Workers’ Party, PT, and the right wing, evangelical Social Encounter Party, PES. The PT, which was founded by ex-Maoists and now claims to fight for “21st century socialism”, won 3.89 per cent of the vote and has 61 deputies in the 500-seat Chamber. The PES, with 2.41 per cent and 58 seats, opposes same-sex marriage, is transphobic and anti-abortion.

Together, the coalition will hold 72 per cent of the seats in the lower house of Congress and 60 per cent in the Senate. The coalition also won 5 out of 9 governorships, including Mexico City’s first woman mayor, Claudia Sheinbaum.

López Obrador had stood twice before, in 2006 and 2012, when the establishment brazenly fixed his defeat. He was always a bourgeois populist, not a working class socialist, but in 2006 his policies were more radical. As a result, a mass movement of indignation against the fixing of the election that year, wracked the country for months thereafter.

The economic challenge and Obrador’s programme

López Obrador campaigned on ending violence, corruption and poverty in a further “Mexican revolution” like that of 1910 and the major reforms of Lázaro Cárdenas between 1934-40. A major issue is the level of violence in the country, with 29,168 killings last year alone. Many are “criminal” and relate to feuds between drug cartels and the police. Others are murders by the police and the army of Mexican civilians and migrant workers trying to cross the borders. But many murders are also political. 130 politicians, including 48 candidates, have been killed since the election campaign started last year.

The Mexican state faces a severe fiscal crisis because of declining tax revenues and soaring expenditures. Oil revenues fell from 8.9 per cent of GDP in 2012 to only 3.8 per cent in 2018. In the decade to 2018, debt in relation to GDP more than doubled from 21per cent to 45.4 per cent. Servicing the international debt this year will cost 20 per cent more than the total budget for health, education and poverty reduction. The neoliberal privatisation policies of Fox and Peña Nieto have hit already poor public services hard. They would need to be reversed to really combat poverty and inequality.

However, in the run-up to the election, Lopez Obrador softened his earlier criticisms of neoliberalism. Now, there is not a single nationalisation in his programme. In its usual cynical style, that voice of Finance Capital, the Wall Street Journal, editorialised on the day after the elections:

“Financial markets will also vote on AMLO’s government each day through foreign-exchange markets and the value of the peso.” It clearly believes this weighs more in the scales than the votes of millions of Mexicans.

Meanwhile, 50 million Mexicans live below the official poverty line. Inequality in Mexico, measured by the Gini coefficient, is exceeded only by post-apartheid South Africa. Despite his promises to end corruption, violence and the country’s incredible inequality, López Obrador’s acceptance speech was long on assurances to foreign and national capital that no major changes in economic policy are contemplated.

One of the biggest capitalists, Claudio X. González Laporte, told reporters, after an early meeting with López Obrador, that the president in waiting had told him his first task was “to calm the country”. González naturally concurred, “He is the person who can do it because he has the mandate to do it and then we must take advantage of that mandate to calm the country”.

Yet, if he keeps his pledge to the capitalists, he will break his promises to the masses; where will he find the resources for major social reforms which alone can dent inequality except in the bank vaults of the superrich?

Likewise, AMLO’s talk of rejecting “reprisals” against former presidents, including Peña Nieto, could mean that their continued impunity will thwart the hopes of campaigners over many “disappeared” trade unionists and peasant leaders, in particular the assassination of the 43 trainee teachers from Ayotzinapa. It was the movement of mass protest and square occupation at this atrocity that first put the skids under Peña Nieto and the PRI in 2014.

Internationally, López Obrador was fierce in his denunciation of US President Donald Trump’s cruel mistreatment of Latin American “illegal” immigrants. But here, too, there are signs that he is backtracking already. Trump, detested in Mexico, held a half-hour telephone conversation with him on the Monday morning after his victory. After it, Trump claimed he “had a great conversation,” with the new president in which they discussed frontier security, commerce, and NAFTA.

The “artist of the deal” clearly believes he faces someone he can bully into concessions. On this we will have to see, but it hardly points to a pugnacious fight against US imperialism. Obrador has already offered tighter controls on the border as part of a deal. The truth is that Mexico’s economy is highly dependent on trade with the US so Trump’s leverage is very great. For all the talk of Mexico as a developing country, and despite the undoubted size of its economy, it remains a semi-colony of the giant to the North.

Can Populism stand the test?

Though “revolutionary” rhetoric is part of the stock in trade of Mexican, indeed Latin American, left populism, its enthusiastic reception and soaring success at the ballot box indicates the desire of a majority of Mexico’s 88 million voters for radical change. AMLO’s victory thus creates a potential for Mexico and Latin America where the left has been in retreat for the last five years or so.

Of course, if the Mexican elite or the US attack and disrupt the implementation of the positive aspects of this programme it will be vital to mobilise alongside him to defeat them. Realising the potential of the July 1 vote, however, is more likely to be the result of left opposition to him, than of the actions of the president himself. The record of radical presidents in central and South America, trying to implement a “socialism of the twenty first century”, points in the direction of disappointment, economic crisis and eventual collapse.

The entire future of AMLO will rest on what his mass base and the radical parties in his coalition do when he hesitates to carry out any serious reforms or if he strikes a very bad deal with Trump. The Mexican bankers’ paper El Financiero gets to the heart of the matter :
“What is he going to do when the impatience of his followers leads them to commit insane acts like assaulting stores, putting up roadblocks, looting goods from trucks. … Nothing that they have not done already, but the police controlled them. Will president AMLO use force to defend private property? Or will he bow to his social base?”

Recent developments in Venezuela, Brazil, and a number of other Bolivarian states, certainly bode ill for López Obrador proving any different, but mere denunciation from the sidelines is no more use than Pollyanna optimism. The outcome of these rhetorical “revolutions”, plus the experience in Europe of left governments like Syriza, shows that the worst thing possible is to sit back and wait. Only if the masses mobilise for their own vital needs can a similar reformist fiasco be averted in Mexico.

The Left in Mexico need to organise so that, if and when Obrador betrays, there are already well-organised mass forces ready to launch a revolution, one for and by the workers, the peasants, the poor and the youth. In preparation for that, they should immediately raise an action programme of demands including: