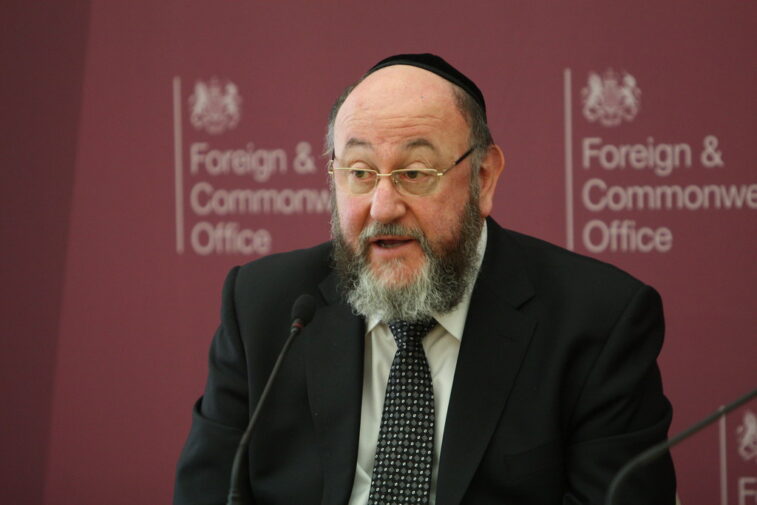 As the general election race heads into final straight, the campaign to paint Labour as an antisemitic party has recommenced.

Writing in The Times, the Chief Rabbi Ephraim Mirvis added his voice to the attack, arguing that Corbyn had sanctioned antisemitism in the party. In characteristically vague language, Rabbi Mirvis stated that Labour’s alleged antisemitism could not be fixed with new staff or processes, and that it was a “human problem”, and a “failure of culture”. He said Corbyn associated with antisemites, and considered “those who endorse the murder of Jews” as friends.

He also claimed the party has 130 outstanding disciplinary cases. How precisely he has come to know more about the number of cases than the party itself is far from clear.

This is not the first time a Chief Rabbi has spoken out in such hyperbolic terms about the Labour leader. Mirvis’ predecessor Jonathan Sacks last year accused Corbyn of making the most antisemitic statement of any senior politician since Enoch Powell, after he suggested a group of Zionist activists didn’t understand irony.

Whilst emotive, Mirvis’ diatribe is in complete contradiction to all evidence surrounding the extent of antisemitism within Labour. Even the statistics produced by proponents of the smear campaign indicate that not only are antisemitic attitudes lower amongst Labour Party members than Conservatives, but that such attitudes are lower in the party now than they were before the election of Jeremy Corbyn and the influx of new members.

This evidence reflects the remarkably low number of Labour members who have been found to be of antisemitic. In February, General Secretary Jennie Formby released data showing that of roughly 1,000 complaints submitted to the party concerning antisemitism, 400 were against individuals who were not even members, 220 cases collapsed due to lack of sufficient evidence, whilst 49 had quit the party since the allegations had been made.

Excluding roughly 200 ongoing cases (which, contrary to Mirvis’ claims, have all since been resolved), the remaining allegations resulted in 187 formal warnings and 12 expulsions, together less than 0.06% of the total party membership. While every case of anti-Semitic behaviour is abhorrent and has to be dealt with swiftly with an appropriate measure, including expulsion if the culprit is persistent, dangerous or unapologetic, it cannot be said that the party has lagged behind events.

Indeed Formby has rebutted Mirvis’ claims in the Jewish News (a subsidiary of the Times of Israel), explaining how the party doubled the number of staff working on these cases, expanded the powers of the NCC and hired an independent barrister to oversee the process.

After the release of this data, Labour’s opponents shifted tack, arguing that the party’s threshold for issuing suspensions and expulsions was so high as to allow serious cases of antisemitism to go unpunished, an assertion that Mirvis repeated.

No clear evidence to support this claim has ever been produced. Anti-discrimination legislation adds a degree of pressure on the party leadership to ensure its judgements are made in accordance with clear legal guidelines. This makes any suggestion that the outcomes of disciplinary investigations are determined by the arbitrary decisions of negligent party officials unconvincing. Putting potential legal challenges aside, the absence of any evidence of instances of antisemitism going unpunished throws this claim into doubt altogether.

On the contrary, the legal pressures and a desire to ‘prove’ its credentials in opposing antisemitism have created a remarkably low threshold for disciplinary action against those accused of antisemitism. Indeed, in high profile cases where the party has come under pressure to suspend members, it has been forced to charge individuals with the entirely different offence of “bringing the party into disrepute”. The most outrageous of these instances was the expulsion of Marc Wadsworth, an established and proven anti-racist campaigner who attracted outrage from Corbyn’s opponents when he asserted that right-wing Labour MPs – including the Jewish MP Ruth Smeeth – were collaborating with the media to undermine Corbyn’s leadership.

Meanwhile a lie can travel around the world before the truth can put its boots on. The right wing Jewish Chronicle published a series of libellous articles against Liverpool Riverside party member Audrey White in February, alleging harassment and bullying of Jewish MP Louise Ellman. It took nine months (imagine if the Labour Party was this tardy) for the Independent Press Standards Organisation to investigate the issue, finding the paper guilty of publishing misleading untruths and unproven smears. But this is the point of a smear, or fake news campaign; the damage is already done before the libeller is brought to account.

Who is considered a “real Jew”?

A further remarkable piece of evidence which contradicts Mirvis’ claims about Labour is the huge increase in the number of Jews voting Labour between the 2015 and 2017 general elections. Whilst Ed Miliband won 15% of the votes of British Jews, Corbyn managed 26% just two years later.

Against this rise in Jewish support for Labour under Corbyn’s leadership, it’s important to examine the extent to which figures like Mirvis represent Britain Jews at large. In the first instance, the office of Chief Rabbi represents only those belonging to the Orthodox synagogue. Whilst the largest Jewish denomination, no estimate puts its membership at more than 26.4% of the total Jewish population. About half of Britain’s Jews – dismissively excluded from the imagined entities of “mainstream Jews” or the “Jewish community” – do not belong to synagogues at all, whilst the remainder belong to other denominations.

Already completely unelected by, or unaccountable to his own denomination, Mirvis’ predecessor irreversibly damaged any pretext of representing non-Orthodox Jews. In 1997, Rabbi Jonathan Sacks caused outrage when he refused to attend the funeral of an influential Reform rabbi, slandering the late rabbi as a “destroyer of Judaism”, and his Reform movement as a “false grouping”.

This is not the only time a self-appointed figure has been treated as the sole authority on legitimate Jewish opinion. Conservative Party member Jonathan Arkush and his “Board of Deputies of British Jews” issued ultimatums to Corbyn’s Labour, organising the “Enough is Enough” protests in March 2018. Tories and the bourgeois media uncritically covered the demos, scarcely mentioning Arkush’s political affiliations.

Similarly, the Jewish Labour Movement is often treated as an authority on the “crisis”. Leaked communications show that, prior to Corbyn’s election as party leader, the group was little more than a “dormant” e-mailing list. Now they have refused to either endorse or campaign for Labour in the general election. Yet Corbyn’s opponents treat them uncritically as the voice of the Labour Party’s Jews, whilst dismissing and attacking the newly-formed Jewish Voice for Labour, a pro-Corbyn grouping with a much more active and broader membership.

Why antisemitism, why now?

There are several reasons why the ruling class has chosen the Labour Party’s alleged antisemitism crisis as its most persistent and protracted attack on the party since 2015. In the first instance, unlike the attacks on Corbyn’s alleged lack of patriotism, his alleged Marxism, or the absurd contention that had once worked as a spy for communist Czechoslovakia, Labour has done little to challenge the antisemitism allegations in any serious way.

Its response to the allegations has generally been to accept that it has a “problem with antisemitism”, but obediently and enthusiastically adopt extraordinary measures to come down on “guilty” individuals – some legitimately but many others quite unjustly. The most notable instance was its adoption of the International Holocaust Memorial Alliance’s (IHRA) definition of antisemitism, the only major political party in Britain at the time to do so.

Few left wing journalists have been willing to seriously challenge the accusations against the party. The popular online left news outlet Novara Media lost hundreds of subscribers after founder Aaron Bastani agreed with the BBC’s Andrew Neil that antisemitism was “endemic” in the Labour Party. Owen Jones also told a 2017 meeting of the Jewish Labour Movement that figures like Ken Livingstone and Jackie Walker “had no place” in the Labour Party.

However, Labour’s response alone does not explain why the ruling class favours these smears as its tactic to undermine Corbyn. First, they are aware that one of Corbyn’s key strengths is his principled, decades-long record of antiracism. So to smear him as a racist is designed to cast doubt on this unblemished record.

The establishment’s attacks on Labour as antisemitic also align with its wider political support for the Israeli state, and their collective endeavour to suppress pro-Palestinian voices in Britain. The British ruling class gains a lot from this relationship, such as £100 million a year in arms sales, and an ally which projects its counter-revolutionary influence on the rest of its region.

As its support for the apartheid state comes under ever closer scrutiny with every war, every mass killing of unarmed protestors in Gaza, every arbitrary arrest, and every newly built “settlement” in the West Bank, it seeks new ideological means to defend its relationship with Israel. As well as undermining Corbyn, its attempt to treat any solidarity towards the Palestinian cause as antisemitic is an invaluable component of its campaign to silence pro-Palestine activists.

The pressure against the Israeli state is most acutely felt in the form of the Boycott, Divestment and Sanctions (BDS) movement, which seeks a just settlement for Palestinians through economic pressure on Israel. In 2006, Israel set up a Ministry for Strategic Affairs, with surveillance and subversion of BDS activities as once its primary objectives. The ministry’s operations in Britain were famously exposed by Al-Jazeera in 2017, when it documented collaboration between figures within the Labour Party and an Israeli embassy official in an attempt to moderate the party’s pro-Palestinian positions.

The new Israeli government of Benny Gantz will not offer any relief on this policy. On the contrary Ganz and the Blue and White alliance is committed, with the support of US Secretary of State Mike Pompeo and President Trump, to annexing all Israel’s settlements on the West Bank, thus burying once and for all any hope of a Palestinian state. With support among the Jewish diaspora on both sides of the Atlantic diminishing, the campaign to brand all opponents as antisemites who pose an “existential threat” to Jewish people, will undoubtedly be stepped up.

Indeed the strategy has been so successful that the far-right ruling Bharatiya Janata Party (BJP) in India and its supporters in Britain have tried to replicate it, with a campaign to paint Labour as “anti-Hindu”, and instructing temples to withdraw invitations to Labour politicians during the election campaign.

Despite its reformist character, the Labour Party’s radical new direction under Corbyn has – and will continue to – come under serious attack from the ruling class. Its way forward is not to offer concessions, but to recognise the manufactured “antisemitism crisis” as the ruling class’ principle strategy of attack. Labour must continue to stand with the Palestinian cause without hesitation, and must have the courage to call out both the lies and the hypocrisy of the attacks against it. The attacks will not stop after the next concession, or after the next high profile activist is unfairly expelled; they will continue until those putting forward the attacks achieve their ultimate aim: Corbyn’s resignation and the end of the Corbyn project. The time to seriously challenge their attacks is now.