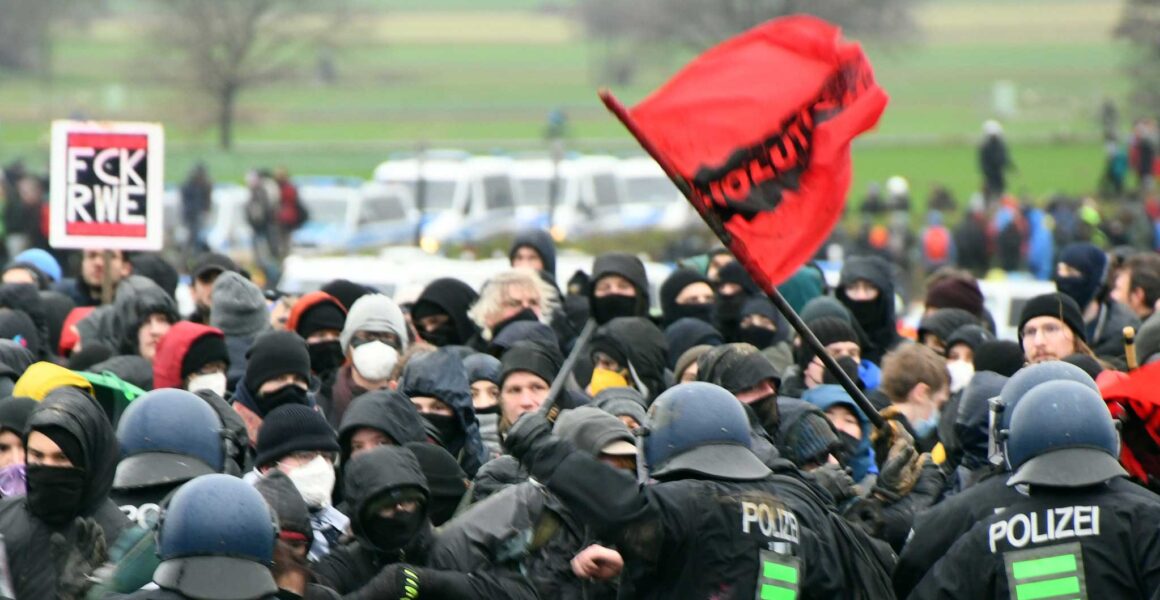 WITH BRUTE force, the state and RWE have created facts on the ground, storming, clearing and demolishing Lützerath within a week. Hundreds of activists were evicted from tree houses and squats.

35,000 climate activists came out over the weekend and shouted “Lützi stays!” Many wrestled with the police in the mud and torrential rain, some were hospitalised by police batons. The protests continued until 18 January, with a few hundred taking part in a decentralised day of action organised by Ende Gelände (Here and No Further, and anti-coal campaign).

Nevertheless, and it hurts to write this, despite a successful mobilisation and huge support all over the country, all over the world, we lost Lützerath to RWE.

Those who are still there are us. We will not forget Lützi, and we will learn from it:

Occupations are right, but the method has limits.

Hambi, Danni, Lützi. Three places that, like no others in Germany, stand for struggles against fossil capitalism, against lignite mining and an insane transport system.

Largely unnoticed by the general public, there have been and still are a number of other, smaller forest occupations. Just today, on 19 January, the Conservative-Green state government of Hesse is clearing the Fechenheim forest in Frankfurt for the expansion of the A66.

In Lützerath, the operation lasted only a few days instead of the expected four weeks. Compared to Danni and Hambi, which took 70 and 35 days respectively to clear, this is a short time, although the number of occupants was similarly high. The difference is clearly due to the fact that a village is easier to clear, and the police had cordoned off the place with RWE, whereas in the Dannenröder forest, which could not be cordoned off, many activists who were cleared one day were back in the forest the next.

The fact that the police in Lützerath expected the eviction to last up to four weeks is certainly also due to the fact that they expected more militant resistance. But there was almost no violence on the part of the activists, it was mainly the cops who repeatedly endangered people’s lives.

Even if it only lasted a few days—occupying and defending Lützerath was the right thing to do. Every struggle needs powerful symbols, and Lützi is one of them. Many people were mobilised around this struggle, evolved politically, broke with the Greens and questioned a state that gave them a beating. For many who were politicised by FFF, this was the first major confrontation with organised police violence.

Even though the eviction succeeded, the government’s aim of dividing the movement did not. On the contrary. The repression led to a massive solidarity with the occupation, to a feeling of commonality among all demonstrators, whether radical leftists, determined activists, trade unionists, members of environmental associations, the Left Party or disappointed grassroots members of the Greens and SPD. From the point of view of anti-capitalist climate politics, Lützerath means a moral, substantive victory, because a broad, radicalising mass movement became visible, which will certainly not disappear after the eviction.

Moreover, Lützi was much more than just the occupation. There was and is a broad anchoring in the region. People were mobilised across the borders of Germany—because there was a place, a symbol, around which they could gather. Rarely has the state defended capitalist interests in such an easily understandable way, and more and more activists, especially young ones, are realising that there is no choice but to resist.

But Lützi also means the realisation that an occupation alone, even with the support of 35,000 demonstrators, cannot end fossil profiteering.

A test for the Greens

Lützerath also means a certain test of strength for the Green Party. The consequences of their involvement in pushing through lignite mining should not be overestimated. Their electorate is characterised by a high degree of opportunistic elasticity, especially since there is no really viable electoral alternative. But it should also not be underestimated.

The Green Party youth organisation alone probably mobilised well over a thousand people for the large demonstration and it is clear to everyone that the massive expansion of lignite mining is happening because of the Greens, no matter how often their leaders say they are not happy about it.

Something like that must have left its mark on people’s consciousness. Four years ago, the Greens and especially the Green Youth were growing from the rise of Fridays For Future, even without appearing openly. Now doubts are emerging and that is a good thing from an anti-capitalist point of view. Because ultimately the Greens are committed to capitalism: the world cannot be saved with them. The break with them is necessary and right for all those who mourn Lützerath.

Whether there will now be major splits with the Greens remains to be seen. It depends on whether the left can formulate an alternative, and it also depends on figures like Luisa Neubauer who, by being able to sell themselves as activists on the one hand, but not making the break with the Greens on the other, can cover for this party from the left.

Not only the party, but also the ideology of green capitalism, the hopes in the federal government’s “Green New Deal” were shaken in Lützerath. We offer to all who are looking for an alternative an open discussion on how to fight and win against the destruction of our livelihood.

The violence that must not be named

All those who have been on the ground in and around Lützerath will also take with them a violent experience that is either strongly relativised in the bourgeois press or blamed on us altogether.

Yet countless videos prove how brutally the police acted against us. Many of them suffered lacerations, bruises or broken bones.

It is cynical that we had to learn in school that the state has a monopoly on the use of force, but when it uses it in all its severity, the violence is only supposed to have come from the others. The violence of the cops is not mentioned by name.

Moreover, our protest is directed towards the question of legality—and thus away from our actual demands and goals, an effective climate protection. It is said that the cops have the right to use violence, that RWE has the right to mine the coal, that we have no right to oppose it. But all this is saying is that bourgeois law is one that allows the destruction of villages and forests for profits. It is the right of the capitalists to keep their power.

Protesting against this is legitimate, as is organised resistance, as long as we show consideration for each other and violence is not an end in itself. Then this can also be communicated to the working class and even be supported by them.

Anti-capitalism is good, but it needs climate class struggle!

Which brings us back to the question: what are the means that will allow us to successfully defend the next Lützerath?

Occupation alone is not it, even if, as described above, it would be short-sighted to reduce Lützi to occupation alone. As in Danni, it would never have existed without broad support, especially locally.

There is a certain history of protests against environmental destruction, which rose to level of a mass movement, which enjoyed broad moral support—partly thanks to brute police force—and still could not prevent the environmental defeats. These include the protests against the Runway West Frankfurt, Stuttgart 21, the A49 (Danni) and, of course, Lützerath. Gorleben and Wackersdorf, on the other hand, were at least semi-successful, although by no means did they achieve the fastest possible phase-out of nuclear power, nor did they ensure that the energy companies paid the costs of final storage and dismantling of the reactors.

All these protests had mobilised—at least temporarily—thousands, sometimes even upwards of 100,000 people. But why were they not crowned with success despite all the determination shown by activists on the ground? The fighting spirit of many anarchist climate activists or participants in Ende Gelände is something that large parts of the socialist left could emulate.

But combativity alone is not enough.

We have to realise that without the workers of RWE and other energy companies, as well as from big industry in general, the struggle against these capitals can not be won. Even if the workers in these companies are often the strata of the working class who are not the first to take action against the destruction of the environment, even if a number of them side with “their” company out of fear for their jobs and livelihoods, this is not a law of nature. On the contrary. Many workers are asking themselves what will be produced for whom in the future. It has long since dawned on many that the ‘ecocapitalist’ transformation of the Social-Democratic-Liberal-Green government and the EU is a swindle that is being carried out on their backs.

In addition, these workers have a key role to play not only in the expropriation of these corporations, but above all are essential in the reorganisation of energy production as a whole. After all, it is not enough to simply replace capitalist managers of RWE with capitalist state officials.

What is more decisive is which class controls energy production. Control by the working class—the employees and representatives of all wage earners, basically of the social majority—can only be exercised with the workers of RWE, Vattenfall, LEAG, E.on, etc. They are the ones we can win over. We have to win them over and convince them that they should not pay for the energy transition by losing their jobs, but that they can shape and implement it themselves.

The hurdles are high, especially because the leaders of the largest trade union in the sector, the IG BCE, are big advocates of fossil energy in the working class. But maybe we don’t have to start there to connect with the working class. The field of public transport, which has a large overlap of interests with the climate movement, is perhaps more appropriate as a link.

There is a collective bargaining round coming up next year. We should not simply offer support based on the division of labour, but discuss with our colleagues—for example, how free local transport can be achieved. This might be an approach for climate class struggle: industrial action not only for higher wages, but also for route expansion and free local transport.

But—that would be a political strike?! True. Because Lützi teaches us that what matters is not what is allowed and what is not, but what is right and effective.