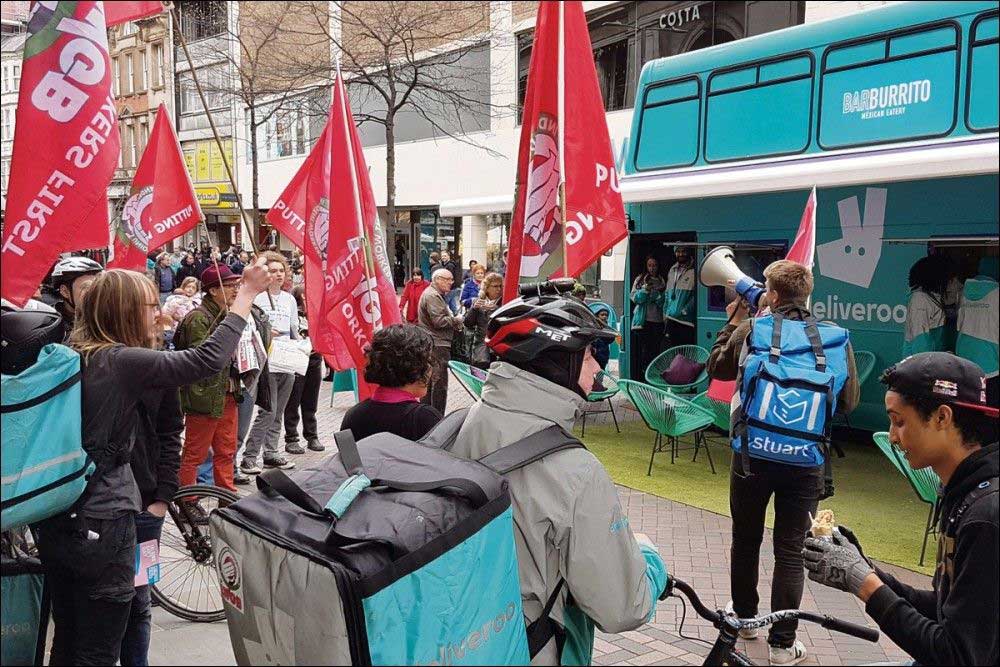 By Alex Reynolds and Tim Nailsea

FOOD DELIVERY couriers are one of the worst-paid and most precarious sectors of the labour force. This sector has traditionally been ignored by the major trade unions, who have considered the workforce to be too dispersed to be organised. The only unions who have made any attempt to unionise this sector are the independents, most prominently IWGB and UVW.

The IWGB has been organising Deliveroo couriers since 2016 in an attempt to win basic employment rights. Their campaigns have forced Deliveroo to introduce sickness insurance, parental pay, access to toilets for riders, reduced waiting times at restaurants, pay rises and recruitment freezes to prevent the company arbitrarily cutting hours of established riders.

Deliveroo has responded with legal challenges. The IWGB is currently appealing a court ruling against couriers’ rights to collective bargaining.

No wonder Deliveroo was keen to sign a backroom deal with GMB, one of the major trade unions—to lock the IWGB out. Alex Marshall, head of the IWGB, criticised the deal noting, ‘the new deal did not change Deliveroo’s current practices’.

For example, the pledge to pay its 90,000 riders ‘at least the minimum wage after costs but only while delivering an order’ is misleading.

As Marshall explains, ‘they are not paid while checked into the app and waiting for an order, meaning their overall earnings per hour for the time they have set aside for work can fall below the legal minimum level.’

GMB have said the deal will give couriers ‘the right to collective bargaining on pay and consultation rights on benefits and other issues’. So, no bargaining on the other key issues facing couriers: sick pay, holidays, conditions, etc. Fundamentally GMB has conceded that Deliveroo couriers are self-employed, therefore they do not have access to the same employment rights as other workers.

National officer for GMB, Mick Rix, boasts that ‘this deal is the first of its kind in the world’ and calls it ‘a blueprint for those working in the platform self-employed sector’. However, the IWGB says ‘the agreement’s recognition of Deliveroo riders as “self-employed” rather than “workers” further undermines their organising efforts’ thanks to their inability to claim sick/holiday pay or the minimum wage.

This is a classic example of ‘business unionism’—GMB are effectively offering their services to Deliveroo as a safe pair of hands in order to help manage the workforce and stifle radical activity. The deal they have struck is in reality a sell-out, highlighted by the comments of Deliveroo CEO Will Shu, who says he is ‘delighted’ with the agreement.

For workers frustrated with the entrenched reformist bureaucracies of the traditional unions, independent unions like the IWGB can have widespread appeal. Unlike the GMB with its permanent bureaucracy of unelected officials, the IWGB has a record of strikes at Deliveroo, notably in 2016 and again last year. The GMB is hoping that workers who want to fight on will gravitate to the IWGB, while the less radical will join the GMB, who will be rewarded by a grateful employer in ‘pay talks’ from time to time.

All trade unionists should denounce this charade and GMB militants demand the right to know the full details of this ‘partnership’. IWGB couriers should approach GMB members in Deliveroo and invite them to work together in a non-sectarian manner, while ruthlessly exposing the GMB’s ‘partnership’ for what it is. Their aim should be to develop cross-union committees together with workers unionised by the GMB to fight for a living wage, sick pay, and the legal minimums on paid holidays and pensions.