League for the Fifth International
Articles

Richard Wilkinson, coauthor of the book The Spirit Level gave a half hour slide presentation about the corrosive effects of inequality on society at the Leeds Anti-Cuts Convention in February 2013.  The “spirit level” refers to the carpenter’s tool to measure incline, and the slide show indeed measured in exhaustive detail the correlation between inequality and social problems across all societies.  Wilkinson’s analysis is a useful one, but ultimately one dimensional in making inequality the central cause of these problems in the rich countries which he focuses on.

The presentation is a series of graphs, many showing statistical correlations of inequality and negative social features.  Graph after graph showed that countries like the USA and Norway with the same per capita income often had radically different outcomes in terms of domestic violence, mental illness, drug addiction, prison population, obesity and more.  Wilkinson pointed out the irony that social mobility is higher in more equal countries than in those like the US and UK – his co-author – Kate Pickett’s – argument to American audiences is “if you want to live the American dream, not just dream it, move to Denmark!”

Unsurprisingly right wing commentators have attacked his book for being selective of countries and social factors – after all Japan has the seventh highest suicide rate in the world.  While there are such weaknesses in Wilkinson’s case, overall socialists reject this cynical attempt by capitalism’s paid hacks to defend inequality.

However Wilkinson’s sole focus on inequality is far too simplistic, excluding almost every other dimension of capitalist society.  By refusing to show the relationship of his “model” capitalist countries – Japan, Scandinavia – to the rest of the world or chart their actual development, they are turned into timeless abstractions. They are a mirage for any movement seeking to challenge the austerity consensus.

First off it looks to the past rather than what’s happening in the present. These countries are not timeless but a moving target. They may have started from a higher level of equality attained during the long postwar boom but this has been increasingly hollowed out by privatisation and cuts for two decades.   For instance, Japan has been locked in recession and stagnation since the late 1980s.

The Scandinavian countries have become the new post-crisis “model” for the Economist magazine (2 February 2013), which welcomes the mass programmes of privatisation of the welfare state, education and health that countries like Sweden undertook since their financial meltdown in the early 1990s. The attraction of the Scandinavian model is that it seems to avoid the scale of cuts that would spark mass revolt. Instead of cuts alone, the strategy is to slip through privatisation behind the backs of the masses and turn the welfare state into a cash cow for business, a welcome new source of profit in crisis-hit capitalism.

It’s a model that Labour began under Blair and Brown, and the Tories are grasping with both hands, with programmes like academies to break up the education system into a profit-run, two-tier education system.  The failure of Social Democracy and the left to fight these cuts has seen the rapid rise of the far right in Sweden in particular.

If we look at the relationship of Wilkinson’s model countries to the world, we will find little to celebrate.  Norway’s oil wealth makes it a model that few countries can follow.  Overall the Scandinavian countries, and Japan with its 258 multinationals and banks in the Forbes list of top companies, second only to the USA, are part of the imperialist club of countries in a hugely unequal world order. The exploitation of the poorer countries of Africa, Asia and Latin America ultimately underpins their wealth, democracy, and relative equality.  Their equality is rooted in the massive inequality and poverty within the semi-colonial countries.

Economic imperialism needs military power to back it up. Hence these countries increasingly participate as junior partners in the US-led NATO interventions to maintain control of the current world order. Sweden is the ninth biggest arms exporter in the world and its troops are in charge of occupying four provinces in Afghanistan. Meanwhile Japan – one of the top military spenders in the world – and China clash over the Senkaku/Diaoyu islands, increasingly rattling their military sabres, as part of a larger competition for power, and possible oil, in the East and South China Seas.

Reforming the institutions of capital

Wilkinson’s aim is to reform capitalism. While he supports the anti-cuts movement since cuts will deepen inequality, and is in favour of building trade unions, his prescriptions would misdirect the anti-cuts movement down the wrong road: more cooperatives, employee-owned companies or share schemes, promoting trade union reps to company boards and more directors from within companies. All these policies are simply utopian – not only will they not happen on a social-wide scale under capitalism, Labour and even the Tories cherry pick such ideas precisely where it allows them to weaken the unions and push through cuts and privatisation.  Look at the plans to turn the Post Office into a mutual like John Lewis, or ideas to distribute Royal Bank of Scotland shares to the population –  making us responsible for RBS’s debts!

Workers won’t get anything except more cuts by becoming incorporated into production as junior partners, or becoming minority shareholders.  Worker-owned cooperatives remain dominated by the market, it means exploiting ourselves to compete with the big multinationals using sweatshop labour. We need to struggle to place the economy under workers’ and consumers’ control, starting with the banks and all companies laying off workers, using strikes and occupations against closures.

Wilkinson says “if we only address this via taxes and benefits” that we won’t get to the root of the problem, we need to go “deeper into the social structure” meaning his prescriptions for cooperatives and various “corporatist” schemes where workers, capitalists and the (capitalist) state supposedly share control.

Socialists would state the problem differently.  We need a mass anti-cuts struggle for the immediate needs of the working class and poor – including slashing our taxes, hiking them on the rich, and defending our benefits.

We do need to convince workers that to do all this, at a time of crisis, it is indeed necessary to go “deeper into the social structure” but with an anti-capitalist programme that links this immediate resistance to the struggle for workers’ control over the levers of economic life itself.  Such demands are transitional to the struggle for socialism itself, the pillars of a new social system: sharing out the work with no loss of wages where job cuts are threatened, taxing the rich for a system of useful public works, nationalisation without compensation, workers’ and consumers’ control of production.

Even elementary resistance demands new forms of organisation; as the recent rank and file-led Electricians’ struggle to defend their contracts shows: an anti-cuts united front movement, councils of action to build struggle in every locality and fight for a general strike, rank and file movements to transform our unions into fighting organisations, a workers defence corps to defend against police and fascist attacks on our actions. To fight for such a programme with consistency and effectiveness will require a revolutionary party to be built. So besides having the wrong goal, Wilkinson has no realistic plan for how to achieve his cooperative or corporative capitalism: it is a pipedream.

Rather than follow a mirage of Scandinavian capitalism  and seek to reform the system’s institutions, we need to reaffirm the words of the Communist Manifesto, and  “openly declare that their ends can be attained only by the forcible overthrow of all existing social conditions. Let the ruling classes tremble at a communist revolution. The proletarians have nothing to lose but their chains. They have a world to win.”

The true end to inequality lies only with a socialist society: with capitalists’ wealth seized and put at the service of society, wage divides between skilled workers and unskilled shrunk, and housework collectivised to give women equal ability to participate in society at all levels. The whole of society, with its economy democratically planned under workers’ collective ownership, would hugely develop not just the general education levels and skills, but also the collective organisations of society and its wealth, in order to ultimately achieve a communist society with want and inequality eliminated. 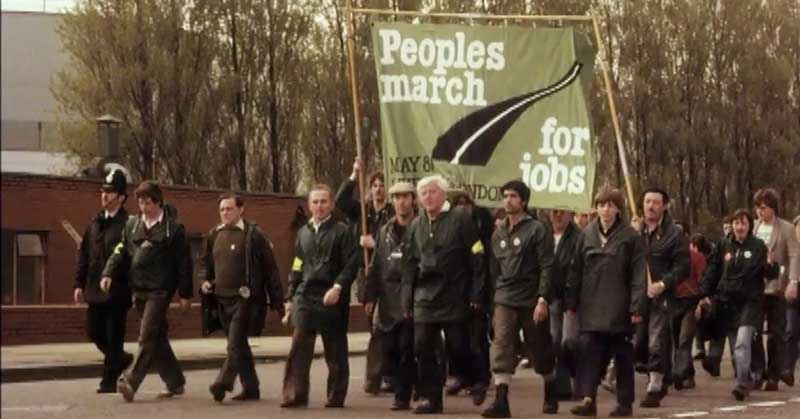 Fighting unemployment in the 1980s

Bulletin | NHS pay justice or a slap in the face?