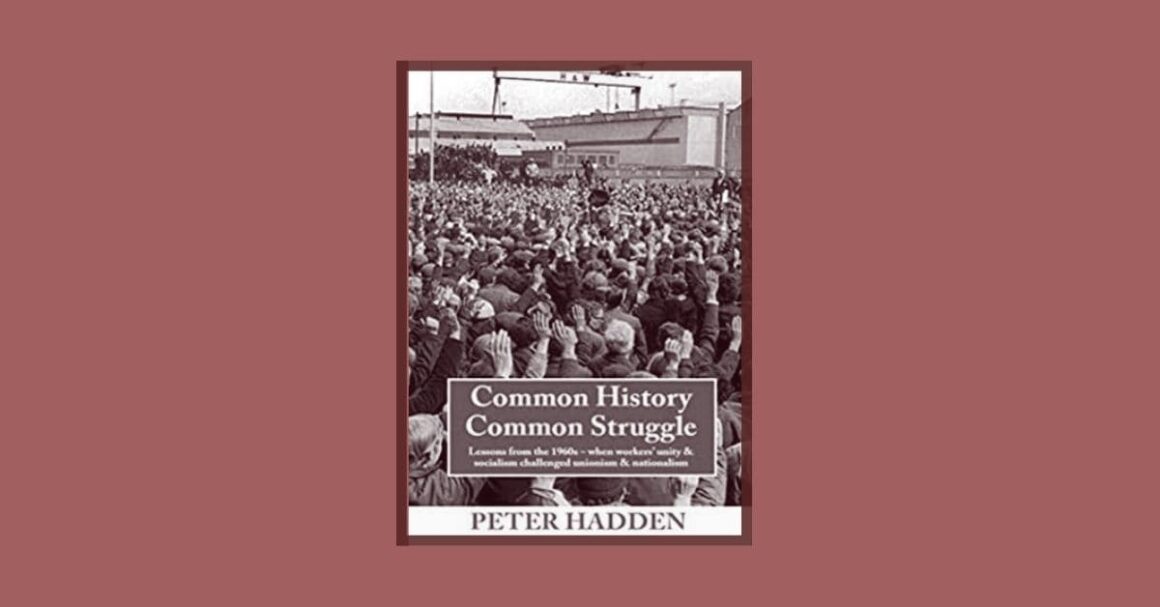 The Six County state of Northern Ireland, which “celebrates” its centenary this year, has recently become a focus of attention once more with the coming into force of Boris Johnson’s Brexit deal with the European Union.

Signs of revived Protestant paramilitary activity threatens not only the Brexit Deal, but the 1996 Good Friday Agreement as well. In particular it could undermine the recently revived power-sharing government, which had collapsed for three years. This revives the whole “Irish Question” that haunted the British left during the so-called Troubles that lasted for over 25 years.

We review Peter Hadden’s Common History, Common Struggle (2017), because it is a fully worked representative of the tradition in the British labour movement to view the national struggle as at best a diversion, at worst an obstacle to the really important business of forging working class unity.

Hadden was a leading figure of the Militant, then Socialist Party (CWI), so his book is replete with Marxist phrases, but his book utterly fails to see the national question as a class issue “par excellence” as Trotsky put it, through which the working class can come to power at the head of a liberation struggle, via the strategy of permanent revolution.

We will therefore focus on the heart of Hadden’s book, which seeks to explain the roots of the Anglo-Irish War and propose solutions that could have provided a breakthrough during the rise of the Republican resistance in the years 1968-74.

Hadden accepts that “the Northern state could only exist through sectarian division and through the coercion of the Catholic minority”, calling out the sectarianism “reciprocated” by right wing Nationalists. But his loose definition of sectarianism serves to justify his failure to support any fight against national oppression.

Hadden continually equates the sectarianism of the loyalism of Protestants as the same as the “Green” nationalism of Catholics; Irish nationalism is regarded as in itself sectarian. There are of course Catholic and nationalist sectarians but the source of the sectarianism is the inbuilt oppression of the Catholic minority from the British backed six county state.

Above all he does not distinguish between the nationalism of a small nation fighting the still mightiest imperialism in the world and that Orange-ism fighting first to hold Ireland as whole in the British state and then to imprison a large nationalist minority within its statelet.

The northern state was created on the back of the defeat for the Irish national revolution in 1921. The artificially contrived state that followed could only exist by way of systematic social and economic discrimination of the Catholic minority, not so much on the basis of their religion as their identification with Irish nationalism.

The demand for an all-Ireland Republic remains a legitimate democratic demand, not a sectarian attack on Protestants. Hadden “forgets” this as he also forgets the role of Britain in nurturing reactionary Unionism and imperialist ideology amongst Protestant workers.

Hadden considers the civil rights movement of the late 1960s as progressive. He correctly criticises its nationalist, Stalinist and republican leadership as well as the failure of the trade unions and Northern Ireland Labour Party, in which Militant and Hadden were embedded, to lead a working class campaign against the state.

“What was required in 1968”, he writes, “ was first and foremost unity of the working class – Protestant and Catholic – on the issue of civil rights and other issues” by “linking the issues of discrimination and gerrymandering with the class issues of wages, housing and jobs”.

But civil rights and an end to discrimination in jobs and housing for Catholics meant dismantling privileges for Protestants. These privileges are only “marginal” in the sense that they did not raise their living standards above the UK average; it does not mean they were not real or significant.

Male unemployment in the early 1970s was three times as high for Catholics as for Protestants. The best paid, best organised, most secure jobs were at giant firms like Short Brothers, Harland & Wolff and Mackie’s. Here 90-95% of the workforce was Protestant; there were instances of Catholic workers being pelted with bolts by their fellow workers.

Elections were gerrymandered to increase seats for Unionists, who for example won regular majorities in Derry where two-thirds of the adult population were Catholics. Poorer Catholics could be denied the vote, while their Protestant landlords could be given up to six. No wonder housing allocation and other local services were skewed against Catholics. Schools were segregated, with Catholic schools getting 15% less funding.

Overseeing this gross discrimination and impoverishment were a phalanx of laws, spearheaded by the Special Powers Act, originally voted through Stormont for one year in 1922, but remaining permanent for over 50. It allowed warrant, arrest and imprisonment without charge or trial (internment), banning of marches or parades, assemblies and publications, the requisition or destruction of buildings, with an overriding right to “take all such steps and issue all such orders as may be necessary for preserving the peace and maintaining order”.

The Special Powers Act was used almost exclusively against the nationalist community – of the 1,981 interned, only 107 were loyalists – although Loyalist paramilitaries committed sectarian atrocities, many in collusion with the (Protestant) Royal Ulster Constabulary (RUC) or the Ulster Defence Regiment (UDR). No wonder Catholic workers and youth turned to the IRA for defence, rather than a labour movement which largely stood by or colluded in segregation.

So when a struggle developed against the worst features of that state – housing, jobs, democratic rights – it would inevitably kindle a national struggle. The repressive reaction from the state confirmed Catholic suspicions of its irreformability, that inequality was inextricably linked to national oppression and British occupation. That is why the struggle for civil rights passed over into a national revolt against the state.

So Hadden’s assertion that “the IRA campaign in general was to polarise the community and stir up sectarian reaction” is completely back to front. Further he calls the Provisionals’ military campaign “individual terrorism”. To explain away the longevity and mass character of the campaign he constructs a novel theory of individual terrorism being “endemic”, as a result of a “social, political and economic impasse with no force able to show a way out”.

For Marxists, what makes an act individual terrorism is its taking place when there is no mass movement, no action by the masses to which it relates. But the IRA demonstrably had mass support and their military actions took place alongside the actions of the masses – rent and rates strikes, street battles, etc. – culminating in the bringing down of Stormont, the northern parliament.

This represented a justified war against the Orange state and its British backers. For Hadden it seems to be a defeat marking the period of transition between “mass struggles to one of sectarian reaction” lasting from late 1969 to early ’72.

The Republican Hunger Strikes were viewed as “divisive”; it was up to the labour movement to decide who was a political prisoner! This demeans the heroic battle for political status and keeps Hadden in line with the sentiments of pro-Union workers.

Whatever the Marxist criticisms of the Provo campaign thereafter – the limitations of the guerrilla war, relegating the masses to onlookers, the counter-productive bombing campaign, etc. – the main thrust was not sectarian. Of course there were sectarian acts and they needed to be condemned, but it was primarily directed at driving out the British.

Hadden raises the demand for a non-sectarian Catholic and Protestant workers’ defence force under the control of the trade unions. This sounds all very nice but the reality was that Catholic homes and areas were the key priority for defence in 1969. In Derry, barricaded no-go areas were set up to stop the police attacks on the Catholic Bogside. In Belfast citizens’ defence committees were set up to stop loyalist pogroms.

The unions stayed well clear of any organising defence teams. “Workers’ unity” becomes an abstract call as long as most Protestant workers have not broken from their support for an oppressor regime. The playing of the “Orange Card” has been used countless times to thwart workers’ unity – and in the early 1970s, they threw the whole deck at them.

The organisation of defence was crucial in these early days. It couldn’t wait for the unions to act. It wasn’t just necessary at critical moments; it needed to be ongoing, disciplined and democratically controlled action councils.

An orientation to workplaces and the unions, seeking their solidarity action and countering sectarian hostility, was vital, but you can’t put the cart before the horse: organise the oppressed first, then seek support.

Militant’s economism and the state

In line with the “strategic entryism” of their Militant mentors, Hadden and his comrades spent much of their time inside the NILP. However, the rebellion on the streets soon overtook the NILP, which responded by becoming increasingly pro-union. In the Ulster Workers’ Strike of 1974 they even gave “tacit backing for the stoppage”, a blatantly sectarian strike organised by loyalist paramilitaries!

The lesson to be learnt from Militant’s practice during these years is that working class unity cannot be fostered by common economic interests alone. Class consciousness does not spontaneously spring from trade union struggle. Lenin called this economism.

The ultimate logic of Militant’s stance is given in the introduction by Socialist Party’s Ciaran Mulholland. In complete dread of the smashing of the Orange state and “the forcible coercion of Protestant workers into a united Ireland”, Mulholland poses the possibility of a “separate socialist state for Protestants”.

He muses on the absurd scenario of two socialist states in Ireland, each one respecting the national rights of the other. Mulholland light-mindedly observes that this ‘resulting rearrangement of boundaries might be cumbersome’, but believes it can be done peacefully! If workers achieve the level of consciousness to abolish capitalism, why on earth would they then want two socialist states with a border between them?

Completely missing is a perspective for developing a programme for the achievement of a Workers’ Republic in Ireland. That programme cannot ignore the democratic and national aspirations of the Catholic minority in the North or the collapse of revolutionary nationalism into a reformist Sinn Fein.

But of course we still need the working class to take centre stage in the leadership of the struggle against capitalism, North and South, and against British imperialism, with their goal being a united socialist Ireland – linked to a socialist Britain as integral parts part of a socialist united states of Europe. This is what Trotsky understood in his strategy for Permanent Revolution.

It is vital today that a new generation of socialists and internationalists study the history of the Orange State, so they can avoid the pitfalls of Militant and the SP, who failed to see the progressive nature of the struggle for full national independence for the whole of Ireland.