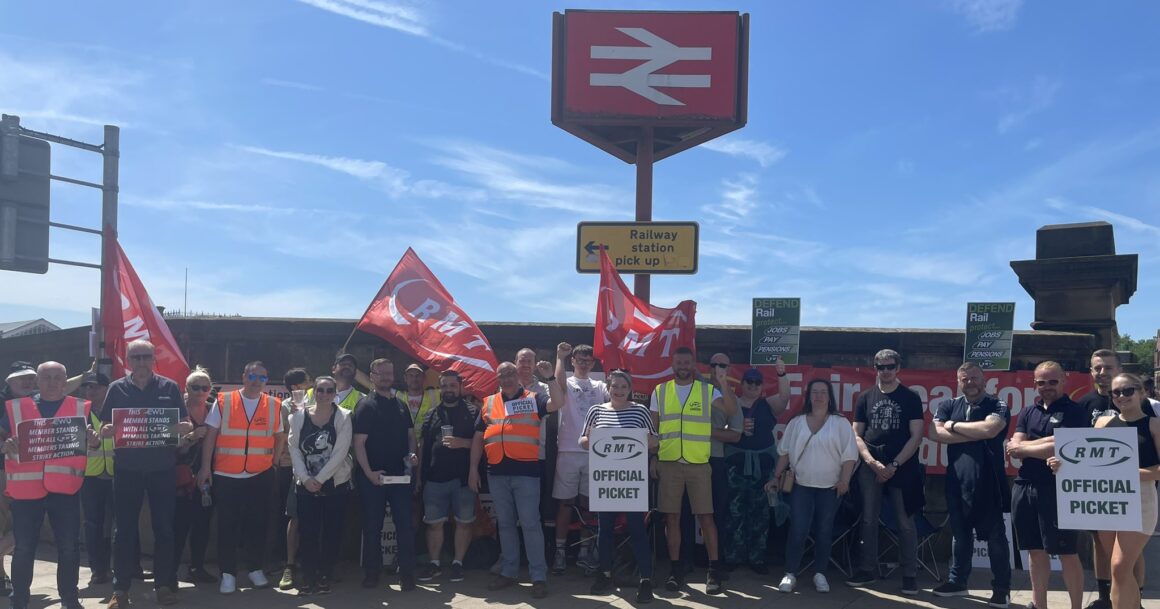 THE RAILWAY NETWORK was brought to a standstill as 40,000 rail workers walked out in the first national strike for 30 years. The RMT union is taking action over a 3% pay offer and threats to jobs, pensions, working conditions and the safety of the railways. They were joined in London by 10,000 underground workers on strike against planned job and pension cuts.

The strike, which took place across Network Rail and 13 of England’s 15 train operating companies, was solid. 80 per cent of services were cancelled and the railway effectively closed from 6:30pm. Negotiations resume on Wednesday before further 24-hour stoppages on Thursday and Saturday.

So far, the government is hiding behind Network Rail and the private operating companies. Transport Secretary Grant Shapps has denied all responsibility, despite his department setting the annual budget for train operating companies. Network Rail boss Andrew Haines (annual salary: £589,999) has opposed “government intervention”, claiming it would encourage unions to “politicise disputes”.

The precedent the Tories — and behind them the employers — want to set is that strikes won’t win real pay increases. With post, education and civil service unions balloting over pay, the Tories hope defeating the RMT will demoralise the labour movement and set a ceiling on pay claims.

The Sun was right to splash ‘class war’ across its front page. The employers want to keep pay low to maintain profits. The government’s plan to put public sector workers on rations is a central plank of that strategy. That’s why this dispute has decisive importance for the whole working class.

What is the RMT fighting for
The RMT claim for a 7–8% increase is based on the rate of inflation when annual pay negotiations opened in December. But the latest figures, released on Wednesday, show RPI inflation of 11.7% — the highest level for 40 years. Add this to the three year pay freeze and rail workers have lost up to 20% of their real-terms pay. A 7% claim amounts to a 4% pay cut. With inflation projected to reach 14% by the Autumn, this will only increase. Workers need to pay their bills and buy food at today’s prices — not December’s.

But there is a second reason to fight for an inflation-proof deal. The government is using this dispute to set the benchmark for pay claims across the whole working class. The rail workers are one of the best organised sections of our movement. If rail workers can be forced to take a pay cut, the employers will use it as license to impose the same — or worse — on everyone else.

That is why the rail workers must win. But negotiating a rise below inflation is not a victory. The union should fight for an inflation proof pay deal: current inflation plus 1% for every 1% rise in inflation. As inflation falls, workers will start to recoup the losses from the pay freeze.

The same goes for jobs. RMT general secretary Mick Lynch has said his priority is a settlement with no compulsory redundancies. But losing nearly 2,000 jobs means more work and more overtime for those that remain. It means more dangerous railways for workers and passengers. It means fewer skilled jobs and apprenticeships for young people.

Rail workers should not accept the loss of skilled and experienced roles. Any worker whose post is made redundant should be offered redeployment and retraining at the equivalent grade or better. There should be one-for-one replacement of redundant roles with new posts. If necessary — share out the work with no loss of pay.

The argument that the pandemic has dramatically reduced commuter railway use is overstated. But in any case, tackling climate change, reducing pollution, and improving infrastructure for work and leisure requires a dramatic expansion of railways and public transport, not a reduction.

The Tories want to blame unions for the railways’ problems. But the government and bosses aren’t interested in modernisation if it hurts their profits. The Tories have cancelled more railways than they have built. The railway is not run as a public service — it is run in the interest of private profit. The fight to defend jobs and conditions must go hand in hand with the fight to kick out the profiteers, and return the railway to public ownership, run under the control of workers and passengers, and funded by taxing the rich.

Spread the action
Lynch has said the RMT is prepared for a “war of attrition”. Tuesday’s pickets were a powerful display of rail workers’ determination. But a series of 24-hour stoppages drawn out over many weeks or even months carries risks of fatigue and financial hardship.

The quickest way to bring the dispute to a rapid — and successful — conclusion is to spread and escalate the action. Drivers’ union Aslef and clerks’ union TSSA are balloting. The RMT strikes will encourage their members to join and strengthen the dispute. Activists from all three unions should campaign for a campaign of coordinated, escalating action in which no claim is settled until all claims are settled.

The success of the strike depends on organising rank and file union members to maximise participation and democratic control. Workplace and picket-line meetings can mobilise for the strike and elect joint strike committees to organise pickets, delegations to other workplaces, discuss the conduct of the strike and negotiations — and reject any deal that falls short of an inflation-proof pay rise.

Solidarity
RMT workers have shown the way forward. But victory will require mobilising a powerful campaign of solidarity. In every town and borough, local solidarity committees should be formed by delegates from trade union branches and workplaces. These can start by promoting the aims of the strike to their members and co-workers, raising money for the strike fund, and organising delegations to picket lines.

As well as supporting the strike, these committees can form the basis for organising rank and file union members across the movement to maximise recruitment, turnout, and votes for action in their own ballots.

We are all in this together. Everyone recognises the need for a united, co-ordinated resistance. The TUC should be bringing the unions together, co-ordinating ballots and campaigns. But we can’t wait for them. We need to be prepared to act with the leaders when they fight — but without them if they won’t. That means getting organised within and across the trade unions.

We all know what is at stake. That’s why the refusal of the Labour Party leadership to unequivocally back the strike is so shameful. With a handful of honourable exceptions, Labour MPs avoided pickets like the plague. They should not be allowed off the hook. We need to use every appearance in the media to demand Keir Starmer and the shadow cabinet back the strikes.

With solidarity, rank and file organisation, and militant action we can bust the Tories’ pay restraint, win a real pay rise for millions — and make the bosses pay for their own crisis. Victory to the RMT!