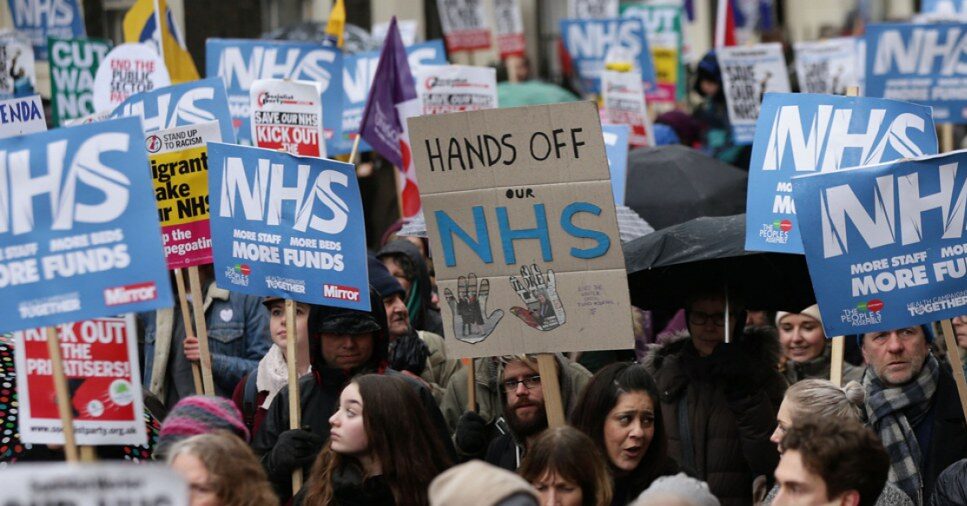 One in six NHS Trusts declared Critical Incidents in early January as Omicron spread through the country. A senior figure in the NHS told the British Medical Journal that this figure understated the pressure on the NHS – hospitals receive no additional support when they declare a Critical Incident, just additional paperwork, so many opted not to.

While hospitalisations and deaths increased in this most recent wave of Covid, the crisis in the NHS was one of understaffing. At times, as many as one in 10 people had Omicron and hospitals were forced to cancel non-urgent procedures for lack of staff.

This situation was compounded by the endemic understaffing of the NHS. We entered the pandemic with 10% of nursing posts unfilled and 100,000 staff shortages in 2018. Coronavirus has exacerbated the problem, with every region in England seeing a rise in nursing vacancies between September 2020 and 2021. In addition tens of thousands are absent with the disease, leading to exhaustion among those that remain.

Beyond staffing, the NHS is plagued by underfunding, privatisation and bureaucratisation. The 2012 Health and Social Care Act further undermined an already struggling system by imposing market-style competition to open up the NHS to private providers.

It is widely recognised that the 2012 Act was a disaster for health provision, its failure further exposed by the pandemic. But this was only the latest in the string of measures, which started with Gordon Brown’s PFIs and PPPs that saddled Trusts with huge debts and Labour’s development of the ‘internal market’ that let private healthcare in. Though Lansley’s Act failed in terms of healthcare provision, it achieved its economic objectives – over £100 billion in NHS contracts have been awarded to the private sector in the last decade.

However, privatisation under the Health and Social Care Act pales in comparison to the billions paid to the private sector during the pandemic. From ministers’ mates winning PPE contracts to the £37 billion failed Test and Trace system run by Dido Harding, the Tories encouraged the private sector to feast on public finances.

Now the government has brought forward a new Health and Care Bill which would further dismantle and privatise the NHS. It would further involve the private sector in NHS commissioning by giving them a seat at the table.

The Bill would set up 42 Integrated Care Systems (ICSs) run independently by boards that will include private companies. The ICSs will not only give out contracts but they won’t even have to open them up to competitive tender. The NHS budget would effectively be devolved to the ICSs.

Unite the union’s Jacalyn Williams rightly said, ‘The government’s new Health and Care Bill is a Trojan horse for more cuts and cronyism and is a licence for politicians to run down and sell off our NHS.’

Like Unite, Unison is also campaigning against the Health and Care Bill. Unite has called a day of action on Saturday 26 February, through which hospital staff could reignite their defence of the NHS with lunchtime rallies, demonstrations and even walk-outs.

While demanding resources and a strategy from the top, NHS activists should use the campaign against the Health and Care Bill to recruit widely, build locally and establish broader networks between the health unions.

After the failure of the NHS pay ballots, where the union leaderships found themselves incapable of mobilising the required 50% turnout, building the union with strong branches and networks of activists is key to fighting for better pay and conditions and defending the NHS. Though this pay campaign was lost, the next award is due to be announced in April and whatever figure the government offers it is likely to fall far short of the rising cost of living. The best way to prepare for that is to launch action locally, including strikes, against staff shortages, working conditions and privatisation.