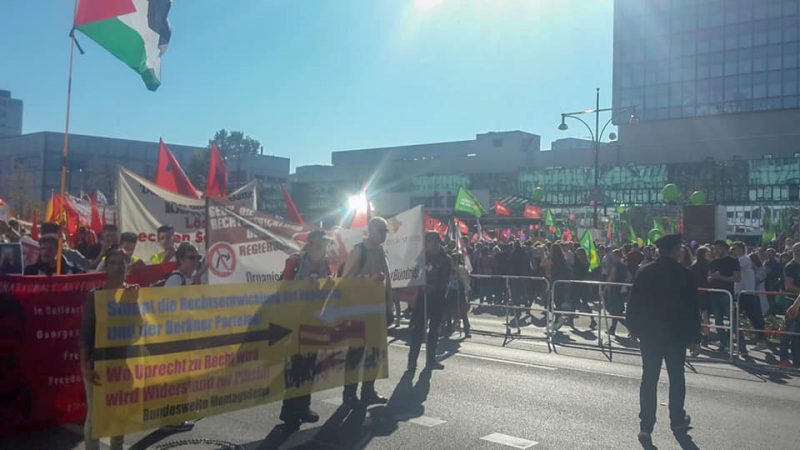 SATURDAY’S “Indivisible” demonstrations in Berlin, Frankfurt and Karlsruhe brought hundreds of thousands out against racism and in solidarity with the refugees and immigrants who are its targets. There were very nearly a quarter of a million on the streets of Berlin alone. With their admittedly rather broad and vague calls for a society based on solidarity, the organisers succeeded in mobilising not only more people but probably a broader range of organisations than even the anti-TTIP demo in 2015.

The list included many NGOs like Amnesty International and Oxfam, initiatives for solidarity with the fugitives like “Sea Bridge”, local Berlin campaigns and alliances, a large trade union bloc, the Equal Welfare Association, migrant associations, the Left Party, the Greens, the SPD as well as numerous organisations of the extra-parliamentary “radical” anti-capitalist left.

Many participants held up their own hand-made placards and banners, a sure sign that the appeal for the demo had reached well beyond those already organised by the various campaigns. This was a genuine cross-section of “civil society”; a reformist working class together with progressive “middle classes”, from young to old, who took to the streets against racism and for solidarity. The “radical” left was naturally in a minority, but found a ready audience for the simple message that there is a connection between anti-racism, the burning social questions and the class struggle.

Indeed, the Berlin demonstration clearly was not only against the Alternative for Germany, AfD and other open racists, but also against the Grand Coalition. Many speeches addressed the bad social situation of many unemployed people and migrants, the failed neo-liberal housing policy, the devastating and untrustworthy “climate policy” of the federal government, which relies on diesel, brown coal and profits. At the same time, the misery in the care sector was denounced and there were calls for solidarity with the current industrial dispute at Ryanair.

Not surprisingly, many people see the NGOs, or groups like Sea Bridge, as the leading forces in the struggle; after all, these groups are in direct confrontation with state racism and/or “Fortress Europe” – quite in contrast to the established parties of the “Left”, especially the SPD which is in coalition with Merkel’s Christian Democrats. It is simply a fact that initiatives such as Sea Bridge currently make politics more credible and above all more militantly active than the reformist or left-bourgeois forces fixated by parliament.

On the whole, the media reported the Indivisible demo quite objectively, certainly more politely than the anti-TTIP demo of 2015. This reflects the attempt to present its opposition to AfD as therefore supportive of current government policy. Undoubtedly this danger exists, but for the time being it is more likely that the Greens will increase their influence on the mass of demonstrators, because the SPD and the Left Party are politically stricken. The SPD is paying the well-deserved price for the Grand Coalition while the Left Party has to deal with Sahra Wagenknecht and her populism.

Of course, there is also the possibility of the emergence of a real force that can go beyond demos and build mass-based campaigns against racism, housing shortages and precarisation. In short, this movement can become a militant one if the radical left, if revolutionaries, intervene in it.

Not only the right-wing populists of the AfD, the FDP, but also the CDU obviously see this danger. Their Berlin regional association described the demonstration as the work of “dubious organisations”. The presence of “Red Aid” among the organisers and numerous “left-wing radical blocs” represented a dangerous opening of civil society to “left-wing extremism”. “When today democratic politicians or even ministers walk through the city side by side with left-wing extremist organisations, it is either naive or politically irresponsible”, complained the Secretary General of the Berlin CDU, Stefan Evers.

A few days before the demonstration, Sahra Wagenknecht revealed a great deal about her politics. On the one hand, although she is a leader of the Left Party, she violated its decision to support #Indivisible while, on the other, as the founder of the “Aufstehen”, “Rise up”, movement, she explained that it would not support the call for the demonstration because, although Indivisible did not explicitly call for open borders, it was “going in that direction” and this would exclude people who were “just as willing and are convinced that one must oppose racism”.

There is always a danger that such major events come and go and leave no trace. It is not only the civil society organisations, but also left-wing parties and trade unions that duck the need to build a militant movement out of a mass demonstration. Today, many expect that Indivisble’s signal will radiate across the “republic”, thereby bringing together local struggles that should also be “indivisible” locally and could stand united against the shift to the right. That is possible, and certainly necessary, but what will be decisive is the action of the unions, the Left Party and, in some places, the SPD, and organisations of the extra-parliamentary “left”.

Here it would be important to generalise the anti-racist struggle in the next weeks at (follow-up) conferences of Indivisible, to weld it together with the “other” social struggles and to develop common initiatives. Housing shortages, poor educational facilities, proposed privatisations of public services, further intensification of internal repression through state laws, armament and war policies, a looming new economic crisis – all these can be brought together in local struggles as well as in nationwide mobilisations.

It is not inevitable that a mass demonstration with hundreds of thousands should come under the leadership of the Greens and NGOs, or that it remain a one-off event with a vague platform but no concrete demands and fighting methods. But the task of bringing such an orientation into the movement cannot be delegated by revolutionaries to others. It is necessary that all the forces of the “radical left”, which stand for an alliance of action, a common battle front against the shift to the right and the attacks of the government, act together for the construction of such a united front. Only in this way will it be possible to force the mass organisations to take action.