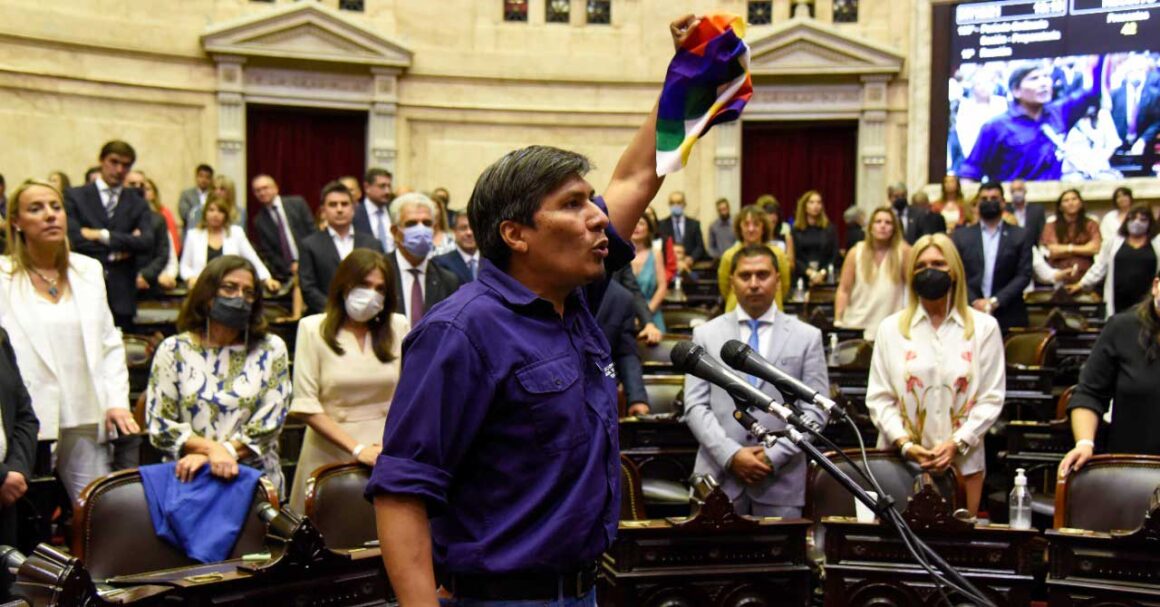 Photo: Alejandro Vilca, a sanitation worker and the first indigenous worker to be elected to Argentina’s congress, is sworn in on 7 December.

The Argentinian mid-term congressional elections produced dramatic results. On 14 November the centre-left Front for Everyone of President Alberto Fernandez, dominated by the Justicialist Party, a branch of Peronism, lost its majority in the Senate for the first time in 40 years. This coalition lost its former stronghold, Buenos Aires province, to the conservative Together for Change coalition, the main opposition grouping.

The Workers Left Front – Unity (FIT-U), a coalition made up of four Trotskyist organisations, has emerged as the country’s third largest political force, winning 1,270,540 votes (approximately 6% of the voting population) and four Congressional seats. In the last midterms it won 1,156,160 votes (4.77%). The coalition of Libertarians and Conservatives whose core is the newly formed far right grouping Freedom Advances, achieved 17% in the City of Buenos Aires – previously unheard of for a third party.

The Peronists have dominated Argentinian politics ever since the collapse of the military junta following the country’s defeat in the Falklands War. Peronism is a nationalist version of bourgeois populism married to social welfare introduced by an authoritarian military Bonaparte, Juan Domingo Peron. He established a powerful hegemony over the trade union movement through the General Confederation of Labour (CGT) and delivered several key economic reforms that gained mass support.

The latest Peronist president Alberto Fernández, elected in 2019 on a programme of socially redistributive policies, has come under pressure due to the austerity measures imposed to repay a $57 billion IMF loan agreed by his predecessor and current rival Mauricio Macri, the leader of the Together for Change coalition, in 2018.

This has left millions without even a meagre emergency income during the pandemic and imposed cuts at a time when more than 40% of Argentinians live in poverty, with wages failing to keep pace with inflation. The Peronist coalition has refused to break the IMF deal and pursued a policy of conciliation towards the imperialist financiers in the hope of refinancing the country’s foreign debt.

Illusions in the Peronists have therefore been shaken once again. Although the defeat was not as big as had been forecast based on the results of the primary elections which took place in September, they have lost control of both the capital city of Buenos Aires and the national Senate for the first time since the collapse of the junta.

In this context, the Workers Left Front – Unity (FIT-U) has emerged as the third largest political force in the country and the only one promising to break with the IMF and the forced imposition of austerity measures.

Of the four groups, the PTS has the leading role, with three of the coalition’s four deputies and its presidential candidate belonging to it. The PTS is the predominant force in the international tendency, the Trotskyist Fraction – Fourth International (FT-CI), formed in 2004 with sections in most Latin American countries, though the PTS is by far the largest.

The FT-CI now has sections in the USA and in several countries of the European Union, notably in France where, after a split from the New Anticapitalist Party, it is trying to field a candidate in the 2022 presidential elections.

Although a coalition and not a united party, the FIT-U has a common, albeit limited programme. This centres on the non-payment of foreign debt, a reduction of the working day to six hours with no loss of pay, and the nationalisation of the banks and foreign trade.

In contrast to the Peronists and their CGT supporters, who at best put forward limited social reforms, the FIT-U stand on an explicitly revolutionary programme to ‘expropriate the expropriators’ and overthrow the national bourgeoisies of Argentina and all other Latin American countries, which are in thrall to imperialism, to achieve the socialist unity of Latin America.

It also argues for the political independence of the working class, against the integration of the reformist trade unions into the capitalist state, and fights to reclaim the unions from the autocratic bureaucracy and establish a class-conscious (classista), grassroots leadership.

It also has a substantial following amongst the indigenous population of Argentina, as demonstrated by its 25.1% vote share in the city of Jujuy which has a predominantly indigenous population. The FIT-U congressional deputy for Jujuy, Alejandro Vilca, a sanitation worker, is the first indigenous worker to be elected to Argentina’s congress. Once elected, deputies belonging to the FIT-U take a worker’s wage and donate over 80% of their income to a strike fund.

The PTS claims that the focus of all its activity, including its electoral work, is aimed at the construction of a mass revolutionary workers’ party. It has put forward a proposal to unite all the various groups which consider themselves revolutionary and socialist in Argentina, using the programme and perspectives of FIT-U as its starting point.

Whilst this is a worthy ambition, there are significant obstacles. The FIT-U has now been in existence for over 10 years and although it has expanded its reach and influence in that time, the fact remains that it continues to be a coalition of groups, each with its own programme, members and leadership. Several of these groups belong to rival international tendencies. There is therefore a risk that their current unity is unsustainable over the longer term.

Moreover a revolutionary party of the working class cannot ignore the present political consciousness of that class. The CGT still has the allegiance of two-thirds of Argentina’s trade unionists and uses this to tie the working class to bourgeois Peronism. It is essential in these conditions that revolutionary socialists utilise the tactics advocated by Engels and Trotsky vis-a-vis England and the USA to get the CGT to break from Peronism and form a workers’ party in which revolutionaries can fight for their programme.

But the PTS displays a dual weakness: overestimation of the ‘Trotskyist’ organisations as the basis for a revolutionary party; and neglect of trying to break the mass of trade unionists from bourgeois populism. Most so-called ‘Trotskyist’ groups long ago degenerated into centrism (revolutionary in words but left reformist in strategy and tactics). On the other hand, as long as the union bureaucracies retain their hold, the tactic of the united front to expose them and building a rank and file movement within them will be central to opening the road to a revolutionary mass party.

The League for the Fifth International has argued this with PTS comrades since the late 1990s. However, their considerable successes at the polls and on the streets render them very confident in the correctness of their method. They should recall that this is not the first time that Trotskyists in Argentina -– and in France too – have approached such dizzying electoral heights, only to fall back and disintegrate as result of tactical and strategic errors, posed by intense conjunctures in the class struggle.

Despite the significant forces gathered by this revolutionary coalition, the elections also show that the workers’ movement faces a serious threat from the right, which has been the major beneficiary in the collapse of the ruling centre-left coalition. There are two major coalitions on the right, the first and most significant of which is the traditionally conservative Together for Change coalition headed by Mauricio Macri, president from 2015 to 2019 and hoping to reclaim the title in 2023.

Unlike the Peronists, who disguise their concessions to imperialism behind anti-imperialist phrase mongering and empty reformist promises, Macri’s coalition is unabashed in its conciliation to international finance capital.

Its dominance in the congressional election would likely have been even greater were it not for the insurgent Freedom Advances coalition, whose leader Javier Milei rose to fame based on much publicised boasts of his sexual prowess and is both an anti-vaxxer and a climate change denier. The grouping preaches ‘libertarianism’, nationalism and militarism. Although there is not yet an indication that the rapid growth of the group is sustainable, it is undoubtedly a threat to the workers’ movement and must be taken seriously.

By uniting thousands of socialist militants across the country into a common front on an explicitly anti-capitalist basis, the FIT-U has become a pole of attraction around which class-conscious workers can gravitate. If it debates and successfully develops a revolutionary programme and takes the initative to form a revolutionary combat party, this will be a major step forward. But for such a party to lead the working class of Argentina in the struggle to overthrow its national bourgeoisie, it would have to utilise the struggles ahead to break up the Peronist coalition with the unions.

This cannot be done in isolation and the FT-CI will need to set itself the task of laying the foundations of a new International. Now, as its name proclaims, it still clings to the idea of uniting the Fourth Internationalists – a vain endeavor as those who have tried to do so for nearly 70 years have proved time and again.

Meanwhile the election of four socialist deputies will not in and of itself change the balance of class forces or change the lives of working people in Argentina under the lash of IMF imperialism. The success of the conservative opposition is likely to lead to even greater concessions to the IMF and consequently deteriorating conditions for the working class. Also, the rapid growth of the far right spells trouble for the country’s indigenous people; this must be combatted before it is able to infect the minds of people seeking any solution to the current crisis.

To lead the workers in repelling these threats and lifting themselves from poverty intensified by ever increasing foreign debt repayments, the FIT-U will need to contribute to building a true mass revolutionary party capable of leading the working class to power against the influence of international capitalism. 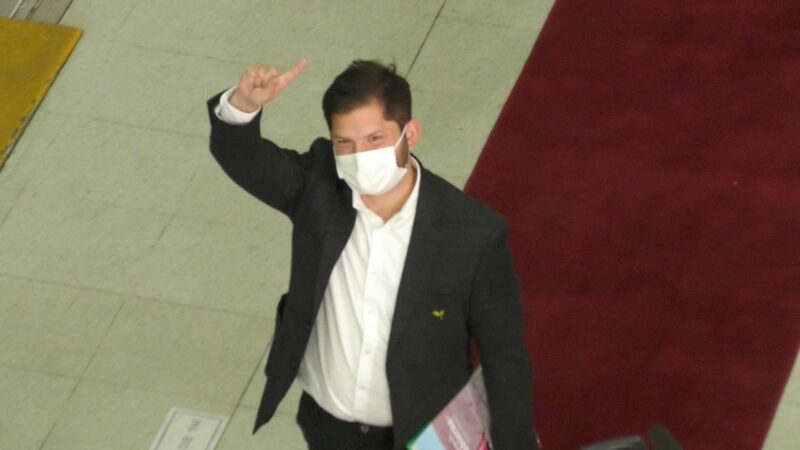