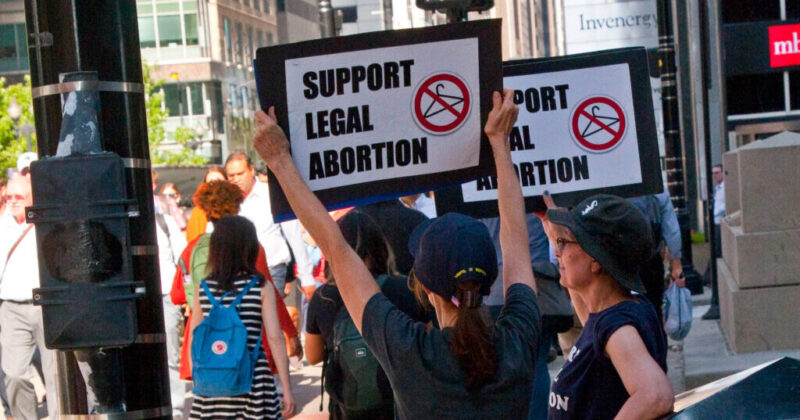 THE RECENT leak of a draft majority opinion from the Supreme Court of the United States repealing the Roe v Wade judgment that legalized abortion rights throughout the United States, has caused an explosion of anger and protests nationwide. The Court will deliver its final ruling in late June or early July.

The draft, by notorious right-wing Justice Samuel Alito, stated that the original Roe vs Wade decision in 1973 was “egregiously wrong from the start” and consequently should be overturned, along with the 1992 ruling on Planned Parenthood vs Casey, that endorsed Roe vs Wade as settled law and precedent.

In the USA, such an overturn by the Supreme Court is rare and historic. For more than 50 years, these rulings were based on the Fourteenth Amendment’s right to privacy from governmental interference in personal choices. It would allow many states to pass draconian laws effectively ending a woman’s right to choose whether to continue with a pregnancy.

Half of the US states are expected to outlaw abortion in most, if not all, cases, even where the life of the mother is in danger. In the other half, even if it remains legal, the pressure on clinics and medical providers from out-of-state patients will be immense, creating waiting lists that would prevent women accessing the procedure in time.

The effects of this move by right wing politicians and the powerful forces of religious reaction will hit poor and working-class women and their partners, families and friends particularly hard. Combined with the recent Texas law allowing “interested parties” to sue providers of terminations and gain financially from these lawsuits, this attack will also endanger anyone who assists women seeking an abortion, even in a state where the procedure remains legal.

The leaked Scotus decision does not reflect the views of most ordinary Americans. In fact, the last CNN poll showed 69 percent of the US public were opposed to overturning Roe vs Wade. This even included 72 percent of Republican leaning voters. But, in our great democracy, the views of the majority—even when formed against the pressure of the rightwing media, the churches, etc. are systematically thwarted.

With gerrymandered legislative districts, massive voter suppression for people of colour and the working class and outright authoritarian oppression, all completely legal according to the Supreme Court, the right wing, as personified by the Republican Party and abetted by the Democrats, and a handful of unelected judges can overrule the wishes of almost 70 percent of the population.

Democrats
While it is the Republicans who control over half the so-called Red States, who are leading the onslaught, the Democrats are culpable in their feeble opposition. Biden’s response was to call for a federal law to protect abortion rights Democrats had 50 years in which to pass such a law, but did nothing.

They are always long on talk about women’s rights—but short when it comes to action. Senator Elizabeth Warren’s said, ‘I am angry, upset and determined’ to a demonstration outside the Court. ‘The United States Congress can keep Roe vs Wade the law of the land – they just need to do it,’ she thundered, referring to the Women’s Health Protection Act. Yet it fell in the Senate in March, opposed by every single Republican plus Democratic senator Joe Manchin of West Virginia, an enemy of every progressive social or democratic reform.

Even the party’s democratic socialists, Bernie Sanders and Alexandria Ocasio Cortez, did not go beyond calling for abolition of the filibuster in the Senate and the need to pass a federal law protecting abortion rights. Yet they know that given the substantial numbers of right-to-life Democrats such a law is bound to fail. In fact, there is likely to be an even bigger majority against abortion in both Houses after the mid-term elections. They should be calling millions onto the streets to take direct action, rather than sowing illusions in Congress.

Despite the Supreme Court likely action having been flagged up for months, the leak has shocked millions. The big challenge is to turn outrage into action. Waiting for Biden or the Democrats, with their wafer-thin majorities in Congress, or concentrating on campaigning for Democrats in the midterms in November, would be fatal.

Fightback
Only direct action by millions, halting the machinery of government and profit making, ready to face down the courts and the police, can force the judges, the politicians and the police to back down and recognise women’s sovereignty over their own bodies (and that of LGBT+ people too) in every state of the Union.

Spontaneous demonstrations have gathered outside the Supreme Court in Washington and in many other cities, but even bigger mobilisations will be needed, as rapidly as possible, involving not just the women’s movement but all progressive forces threatened by this decision.

This means mobilizing the working class in the unions, almost half of whom are women, and reaching out to unorganised workplaces, to take actions that hit the economy, until the Supreme Court is forced to back down, a federal law is passed that protects a woman’s right to decide and clinics set up in all states and districts, particularly those where they are presently absent.

Unions and DSA locals should coordinate actions to bring unorganized workers into the fight. The eventual goal should be a general strike until the tyranny of the minority on this issue is overwhelmed and overthrown.