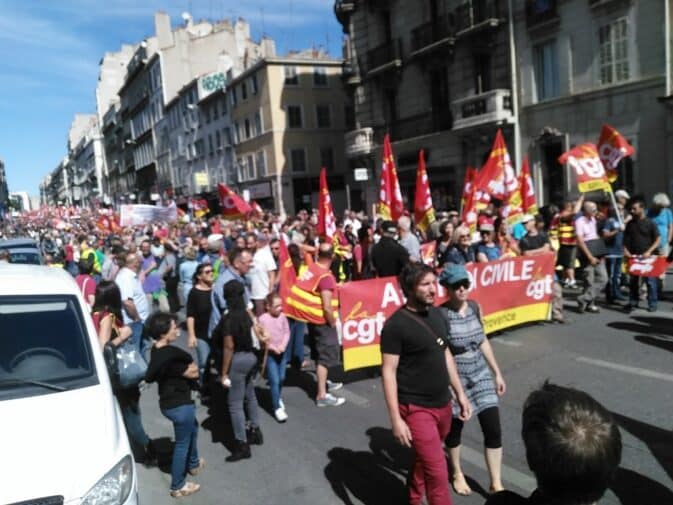 Workers step up resistance to Macron, but left continues to stagnate

A prolonged strike in Accident and Emergency departments throughout the country, a successful strike on the Paris metro on September 13, with an indefinite stoppage forecast for December, a national day of action on 24 September by the CGT: this accumulation of actions shows that there is a growing polarisation in French society and that the working class is again taking the road of resistance against the attacks of President Emmanuel Macron.

The hospital strike is emblematic of the changing face of working class struggles. It arose from the prolonged attack over the last decades against the health system, whose cost has been capped at 12 percent of GDP. This resulted in massive hospital closures, cuts in the number of workers and a generalised worsening of healthcare nationwide.

A&E has born the brunt of this “reform”. Millions of unemployed, migrants and those in precarious employment do not have a general practitioner but go to hospitals for all kinds of treatment, from routine to urgent: the number of patients treated went from 10 million in 1996 to 21 million in 2016. The results are long hours of waiting for everybody, including the very sick, in deteriorating conditions, leading to physical attacks on nurses. They have to work long hours; sometimes 18 hours in a row; waiting for the next shift, for which they are paid low wages.

The fight back originates from the rank and file who built an InterA&E collective and were able to extend the struggle to more than 200 hospitals. While the government initially tried to minimise the effect of the movement and to stigmatise the strikers, it is now taking it more seriously, even though its offer of a monthly bonus of €100 will not change anything.

It has only made the offer because these strikers could be the sparks that light a wildfire of resistance against the government attacks. However, the strike is also emblematic because it was initiated and run by rank and file workers who organised it separately, even though the unions do support it. This testifies to the growing inability of the bureaucratised unions to respond to workers and to offer to them a credible strategy. While this means that the strike is quite dynamic, it reveals the weakness of the organised working class movement and exposes the struggle to all kind of dangers: corporatism, useless stunts (at one point strikers threatened to give themselves injections of insulin) and the inability to effectively extend it to other sectors in the hospitals and beyond.

In this situation, where the “grace period” for Macron is clearly over, the government has launched the second round of reform of his five-year presidency. Among other attacks, for instance against benefits for unemployed, the most dangerous one is against the pension system. After lengthy and opaque workings of a special commission, the results came out early this year. There will be a “universal system” based on accumulating points, in which “each euro contributed will give the same right to a pension for everybody”.

While this seems in line with the republican slogan of “Egalité”, it hides a massive blow against the rights of the workers. First, the industry-specific system of pensions (there are over 40 of them, most for workers in sectors such as the railway, metro and bus drivers) will be abolished: at the moment these workers in stressful jobs can retire earlier, at 55 instead of 62. Second, most of the workers will loose 10 to 30 percent of their present entitlement, due to the change in the scheme, and this will hit particularly precarious workers, women and lower-waged branches. Already today, a manual worker has a life expectancy that is seven years shorter than a white-collar worker. Third, the new system will silently introduce longer years at work. A penalty system is being considered, reducing the pensions of those below the age of 64, while the present legal age is 62.

This is potentially an explosive issue. Already in 1995, 2003 and 2010, previous reforms of the pensions were met with serious resistance, with a long strike in 1995 obliging the government to abandon the project. The first signs are that, despite the technical complexity of the debate, intended to obscure the political content, workers are extremely concerned and will not abandon their rights without a fight.

On September 13, rail workers on the Paris RATP blocked the whole metro and bus system, with a record number, more than 60 percent, participating in the strike, the highest since 2010. On September 24, CGT called for a day of action, with 170 demonstrations, for “jobs, wage increases, more public services and a solidaritybased system of pension”. RATP unions are preparing an unlimited strike starting December 5.

Despite all these signs of combativity, the workers’ movement remains weak and divided. One of the major unions, the CFDT, which sees its strategic orientation as being a partner with government and the employers, actually approves of Macron’s reform and is negotiating with the government. Ominously, the CGT and FO (Force Ouvriere) organised separate days of actions and CGT has not joined the call for the December 5th strike.

The once influential parties of the left, the Socialists and the French Communist Party (PCF) are fragmented and greatly weakened, as shown by the last European Elections. The Socialist Party had 6.7 per cent of the popular vote and the PCF 2.49 per cent.

Jean-Luc Mélenchon has not yet accepted the fact that he has no legitimacy as the populist caudillo of the whole left and seems more interested in posing as a victim of the judicial system than in leading any struggles. His movement, La France Insoumise, (Insurgent France) and the Communist Party, instead of focusing on the coming battle for the pensions are campaigning for a referendum against the privatisation of the Paris airport, a campaign, conducted partially on nationalistic slogans, that is not really taking off.

While these reformist parties will be even more polarised by the local elections in March 2020, the hope of the far left after 2009, the New Anticapitalist Party, NPA, is, as ever, paralysed by factionalism. On one side the historical majority are yearning for yet another “recomposition of the left” (decomposition would be a better word), which they have now given the ridiculous name of a “permanent united front”.

They hope to unite everyone from the left of the PS to the PCF, Mélenchon’s FI, and for good measure ATTAC, the campaign for a tax on financial speculation and closing tax havens. On the other side, an activist wing, is adapting to the dubious populists of the Gilets Jaunes (yellow vests), or what little remains of them. Others want to concentrate on climate change, women’s rights, etc. Most probably this paralysis will render the NPA a negligible factor in any union and social movement in the coming period.

Hope must lie with workers’ resistance to the Macron reforms and that militants from the grass roots can create coordinating bodies as the Inter-AE collective has done, to mobilise solidarity between all the sectors in struggle.