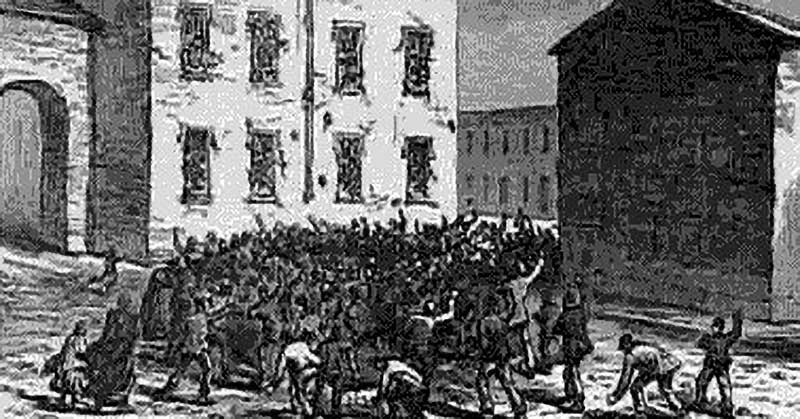 The American Civil War of 1861-1865 was fought largely over the issue of slavery. The fighting was between the states in the ‘Union’ North and 11 states in the ‘Confederate’ South who wanted to separate from the rest of the USA and continue the system of slavery that was so important to their plantation economies. As the export of cotton was essential to the slave holder economies of the South, the North blockaded southern ports so goods could not be brought in or out. This meant the export of raw slave-grown cotton dried up.

The cotton industry formed a huge part of Britain’s economy; it was worth £1.1bn in 1861. Many workers relied on the mill as their source of income. When the cotton supply dried up many workers faced starvation, evictions and destitution. At the height of the cotton famine 533,959 workers were either unemployed or in part time work, forcing the government to implement miserly relief schemes. The relief schemes were laughable, the government refused to provide grants to towns in need; they instead gave more power to the parishes to sort it out themselves, which saw the opening of the first soup kitchen in 1862! The mill owners refused to contribute to the schemes, and as a result their workers were forced to rely on the aid of the government and the church.

The bourgeoisie knew that the abolition of slavery would encourage the working class to fight against their own wage slavery. Mill owners called a meeting to rally support for the South and blamed the Northern cause for the suffering of textile workers. Their efforts proved fruitless because the workers’ fight against capitalism was tied to the struggle to abolish slavery. On 31st December 1862 cotton workers met in the Free Trade Hall in Manchester and voted to continue support of the blockade. They refused to touch one bale of cotton from the south, despite it causing enormous hardship for them, because they knew that the last hands to touch the cotton were the hands of slaves. At the same time Lord Palmerston, the prime minister, came under the mounting pressure from the Mill owners and shipping companies to order the royal Navy to smash the blockade, in order to restore the fortunes of Britain’s first industry.

The long standing antipathy between the mill owners and the workers intensified as a result of the conflict. Not only did the owners support the continuation of the slave holding system as a means of profit generation, and so came into conflict with their workers, but they refused to support their workers in their time of hardship. As a result, tensions among the working class of Lancashire reached fever pitch. In 1863 riots broke out across the county, the biggest one being in Stalybridge. Over 7,000 workers were unemployed and wanting their voice to be heard. This action was met with repression, cavalry were brought in and local police equipped themselves with cutlasses and bayonets. Over 80 workers were arrested. However, this didn’t dampen their spirits! They demonstrated working class solidarity with the Union and the slaves and also nurtured the spirit of internationalism developing among the British workers which helped to set the stage for the founding of the First International (International Workingmen’s Association) the following year.

The strength shown by the workers of the past needs to be emulated today. The systemic racism by police, both at home and abroad, against oppressed communities can’t go on any longer. While America doesn’t rely on us economically in the same way it did back then, we can still show solidarity with black communities and make a difference. Protest, demonstrate and don’t let the issue be forgotten. Racist violence doesn’t just go away because it’s not trending on twitter. We have a duty to show the oppressed people of the world that they’re not alone, their voices are being heard. Workers across the world need to unite and show their support.