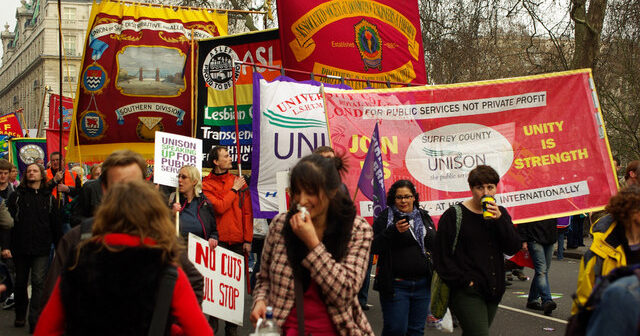 We need a national fight against cost of living attacks

Workers are facing a huge cost of living crisis. Inflation is at a ten-year high, we have soaring energy bills and National Insurance hikes, on top of a decade of stagnant wages. This attack is economic, as energy suppliers make record profits while claiming they have to pass on prices or lose money, and companies attack their workforces or deny pay rises citing rising costs.  It is political, as the Tory government raises the energy cap as well as national insurance to pay for its social care policy aimed at protecting the best-off in society.

Yet despite the bosses waging their side of the class struggle from the government and the boardrooms, it looks like the trade union leaders have largely given up on any kind of co-ordinated campaign against these attacks, while Labour’s policies are weak and ineffective.

The TUC initially announced a demonstration outside the Tory Party conference in Blackpool in March, before cancelling it when it became clear that it would be poorly attended. A new demonstration has been called for Saturday 18 June in London, but appears to have little momentum behind it.

Protests should be the start

One of the problems is that, beyond sporadic protests, the trade union movement appears to have no strategy for how to take on the Tories over the cost of living. People would put more energy into building for protests and marching if they believed these were the first stage in a fighting campaign aimed at victory, rather than just expressions of dissatisfaction.

Demonstrations are important – they can galvanise people who are not usually involved in activity as the first step drawing them into a wider campaign. They can act as displays of strength, raising workers consciousness and confidence, and showing the enemy that the movement can mobilise large numbers against them. They are not enough on their own, however. They must be combined with other tactics, particularly strike action, which can threaten the bosses’ profits and bring sections of the economy to a standstill.

However, for union leaders, demonstrations are often seen, not as an opportunity to mobilise people, but instead to direct their energies in a safe, i.e. contained, way. A way to to show that they are ‘doing something’, without doing much at all. If organisations like People’s Assembly are willing to do it for them, even better.

Why won’t our leaders act?

Since Sharon Graham became General Secretary, Unite has taken a more confrontational approach, with combine meetings to launch strike action over pay and conditions in key sectors, workplace by workplace, seeking to build up industrial strength through limited, localised actions winning victories. This is a good start.

However, the cost of living crisis is hitting workers now, and the mood for a fightback goes way beyond the small sections of the working-class currently engaged in disputes. It hits hardest the majority of poorer and unorganised workers outside the unions. Unite must take the lead in galvanising these workers in a coordinated campaign of protests and strikes, with the aim of building a truly national movement of strike action and disruption, aimed at toppling the Tories.

The left wing union leaders like Sharon or Dave Ward of the CWU would no doubt say there are limits to what can be done here, especially with the Tories in power. If they were serious, they would use 18 June to launch a mass national campaign. They would put aside the bureaucratic routine and launch a high-profile campaign calling for mass unionisation and action to crack strategic targets like Amazon and help precarious workers like Just Eat drivers.

They could prosecute a serious struggle against hunger and precariousness with a TUC cost of living index linked to local democratic committees exposing and taking action against local poverty, and building solidarity with every strike, creating a powerful UK-wide grassroots movement.

Rank and file take the lead

Instead of waiting for the leaders, rank and file activists and reps need to make the start, through local trades councils if possible.  We can get together with other trade union and community activists to build from below while demanding action from the top, with a focus on launching local action committees in every town and city to coordinate this activity.