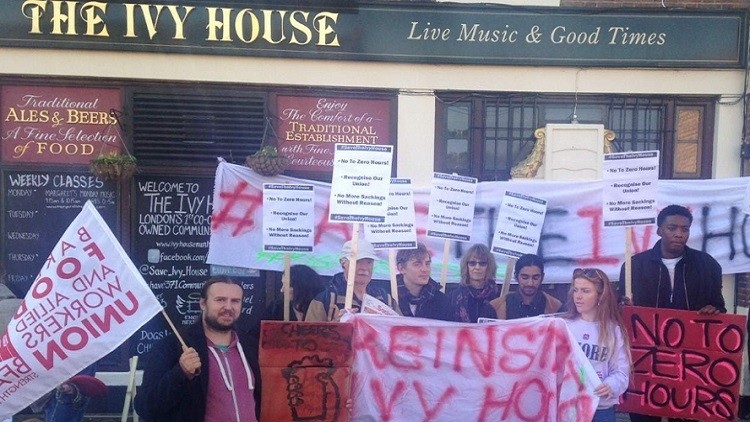 Victory at the Ivy House

When we heard about an unofficial strike at the Ivy House pub in our ward, Nunhead & Queens Road Labour Party invited the strikers to address our next branch meeting, where we unanimously passed a solidarity motion. Here is a transcript of what they told us.

The Ivy House in Nunhead, South East London is a community owned pub, in fact the first such pub in London. I have worked there for three and a half years.

You would expect certain values to come with community ownership, but the Ivy House has always operated with zero-hours contracts for all its staff. Their excuse has been that this is the industry standard. However, staff have always hated this aspect of the job.

Nearly three years ago, we started to unionise the pub. We sent a letter requesting an end to zero-hours contracts to the Management Committee, which currently consists of 11 of the community owners. Despite being proud earners of the London Living Wage, it even says “We are a Living Wage employer” above the door, we asked for fixed hours. Nothing happened.

The unionisation process proceeded with difficulty, mainly because the workforce is so transient. But there is also a quick turnover of managers. In fact the breakthrough for unionising came with the appointment of a particularly unpleasant new manager this time last year. By the summer of this year, 70 percent of staff had joined the Bakers, Food and Allied Workers Union (BFAWU). Staff who had only been there a week were joining in, which was powerful and inspiring to see.

Following a series of complaints by staff, the manager was suspended under investigation, but on full pay. But then, on the last Tuesday of September, four members of staff were suspended. Because they were all on zero-hours contracts, they were effectively sacked, with no pay and no reason given. We subsequently found out that the suspended manager had made all the allegations against some of the dismissed workers.

We felt we had been backed into a corner. So the following day, Wednesday, we balloted for emergency strike action. It was unanimous. We had expected to strike anyway the following week with the internationally coordinated strike at McDonalds, JD Wetherspoon, Über Eats and so on [see page X]. But by Friday we had begun to worry that it would be too late by then.

Sunday morning became the set date. We prepared by spray painting banners and making placards in the park. At 9am we turned up at the picket line with placards, petitions and leaflets. Momentum supporters, Socialist Party members, friends and family joined us.

People from the community, even regular customers and shareholders in the pub, were there. Such was the hostility of most of the committee that they refused even to talk to shareholders or the public on the picket. However, others on the committee did talk to us.

The last demand was won by 9.30am. After a day of negotiations, which we carried on outside and in the open, at 4pm we adjourned for the day, recognising the strains that were appearing on their side and still seeking clarification on the offer they had put on the table.

At one point, the assistant manager was asked to hand over his keys. He refused and the police were called. Fortunately, he was able to produce his contract, which said that he should only hand over his keys to the manager, who was of course suspended. For once the police sided with the strikers – he kept the keys!

On Monday morning, we went through the offer they presented to us and on Tuesday, at 4pm, we signed a letter of agreement. We had won everything, though the four remain suspended, now with pay, pending a disciplinary procedure.

We are back to work, though we would still like to see management issue a public statement to say that they will never again use zero-hours contracts. On our part, with the BFAWU, we will raise a campaign against zero-hours contracts locally and seek allies in driving these exploitative contracts out of the industry and the area.