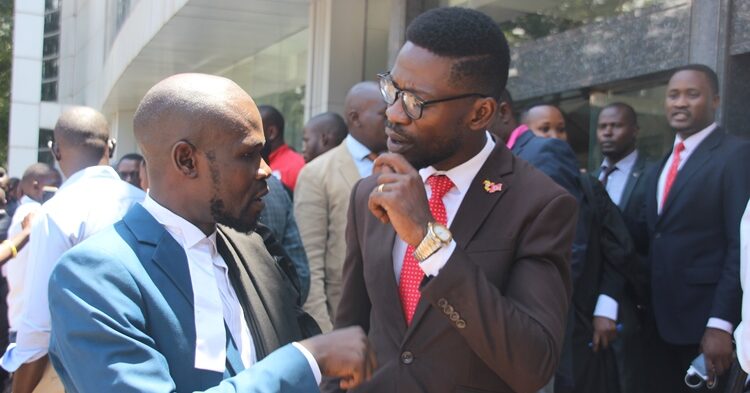 While in the US an ageing president’s refusal to relinquish his grip on power by invoking violence has caused shock waves around the world, in parts of Africa such acts are sadly commonplace. Most recently Yoweri Museveni, who has ruled Uganda since 1986, claimed victory in a clearly fraudulent election, granting him another four years in office.

The count on 14 January gave 76 year-old Museveni 59% of the vote, compared with 35% for 38 year-old MP Robert Kyagulanyi (popularly known as Bobi Wine, the name under which he performs as a successful and highly political reggae artist) of the National Unity Platform (NUP). But this doesn’t tell a tenth of the story.

The violence started as soon as the election campaign began in November 2020, when Wine was arrested and pepper-sprayed hours after declaring his candidacy. A second arrest and beating a few weeks later led to a two-day uprising, leaving 16 protesters dead, 65 injured and 350 arrested.

Between 60 and 100 people were killed during the campaign, as bullets and teargas followed Kyagulanyi’s campaign, during which he was shot at four times, forcing him to don a bulletproof vest and helmet after one bullet smashed his car window. Other opposition parties, notably the Forum for Democratic Change (FDC) were also targeted for repression, nominally for breaching covid-19 regulations.

This did little to dent Kyagulanyi’s popularity; on the contrary his appeal on social media platforms, especially to the urban youth, prompted Museveni to shut down the internet for five days during the election. This was unfortunately not unprecedented, but still an outrageous undemocratic act.

In particular, Museveni wanted to stop the NUP monitoring the elections via its UVote app; the military also chased dozens of opposition monitors from polling stations and beat up their supporters on the day, just in case.

Almost all international monitors were banned. The EU and US were unusually scathing in their condemnation of the violence, arrests and ample opportunities granted to the authorities to tamper with the vote.

NUP official Mathias Mpuuga immediately challenged the results: “We have evidence of ballot stuffing and other forms of election malpractice and after putting it together we are going to take all measures that the law permits to challenge this fraud.”

Allegedly pre-ticked ballot papers were issued to would-be voters, ballots at some polling stations never counted, while other polling booths remained open till midnight and 30 of the very few election monitors allowed to observe the count were arrested.

By Ugandan law allegations of fraud have to be brought to the courts within 10 days of the election. Unsurprisingly, security forces have placed Wine and his wife under house arrest to prevent such a challenge being made.

Kyagulanyi is the first opposition leader who is not linked to the military. Many in the West have heard of Idi Amin’s brutal dictatorship, but far fewer remember the crimes of his ouster, Milton Obote, who won power through a civil war and ruled the country with an iron fist between 1980 and 1985. Amnesty International claim Obote was responsible for 300,000 deaths during his time in office, though others put the figure closer to half a million.

Museveni’s National Resistance Army drove Obote into exile and the rebel group’s political wing, the National Resistance Movement (NRM), went on to win every presidential and parliamentary election since 1986. Until the last four years, former leaders of the NRA even led the main opposition party, the FDC. Kyagulanyi’s emergence as the most serious challenger to Museveni has changed all that.

The NUP is now the main opposition party in parliament. Although at the time of writing final figures are yet to be announced, we know that 13 NRM government ministers lost their seats to NUP upstarts, including the Vice-President and Chief Whip, as well as the ministers for agriculture, education, labour and land.

Kyagulanyi stood on a vague platform of reform, promising to address basic needs like improving access to healthcare, education, clean water and justice. This, combined with his populist campaigning style – “”People are not just following me, people are following an ideal that I represent… I’m just one of the millions and millions of Ugandans that want better” – struck a major chord in the urban areas, especially among the youth.

Kyagulanyi was raised in one of the poorest suburbs of Kampala and, once he became famous, he chose to build his recording studio in the same district. He stood for parliament in 2017, first as an independent, only later joining the NUP. Since then, he has used his dual platform as recording artist and MP to denounce corruption, another key part of his programme.

Uganda has possibly the youngest population in the world with 77% being under 25. The World Bank estimates that 700,000 young people will enter the jobs market every year to chase just 75,000 jobs available to them.

A quarter of the population, 11.4 million, live in poverty and the economic downturn exacerbated by the pandemic has boosted this number by three million in the past year. Half of Ugandans have no access to clean water and 82% lack adequate sanitation facilities.

This is a powder keg, which will eventually explode. Museveni and his Western backers have clearly been rattled.

For decades Museveni was the darling of the West, conscientiously implementing the IMF’s Structural Adjustment Programmes. Though these have led to growth in the service sector and provided a bounty for multinational companies by way of privatisation and relaxed labour laws, they have done little or nothing to alleviate poverty either in the cities or rural areas. International aid, most recently to fight covid, regularly finds its way into the military budget.

In his acceptance speech Museveni was forced to promise land reform and protection for subsistence and cash crop tenant farmers against land evictions. Although we don’t know the extent to which the rural vote was rigged for Museveni, it is certainly where his base resides. While nine out of 10 Kampala constituencies returned for the NUP, 77% of Ugandans reside in the countryside.

One fifth of these rural workers are waged labourers, engaged in agribusiness or on large farms; the rest are small farmers, subsisting on small plots and growing cash crops – mainly coffee and sugar – eventually for export. Many farmers top up their meagre income with seasonal wage labour.

Whenever the family is the economic unit, as is usual in underdeveloped rural areas, it reinforces patriarchal structures of oppression. Women in particular face hardship, often having to toil for 18 hours a day, working on the most infertile land and performing the lioness’ share of domestic chores, caring for the elderly and infirm and child-rearing.

Children also suffer tremendously. Education, even at primary level, is limited to one child per family, most often a boy. Education is not free. While many in the West have heard of the Lord’s Resistance Army and its cruel use of child soldiers, fewer know that child slavery is rife in Uganda too. The fact that families have to sell their children because they have no other way of making sure they are fed is an indictment, ultimately, of imperialism.

Museveni’s grip on the rural areas has so far held up for historical reasons. The civil war he led against Obote was also in part a tribal war and the victor gave out the spoils. But squeezed between the imperialist-controlled market and rapacious landlords, the farmers’ allegiance to the NRM could be at breaking point.

But there is another tie to the countryside: the army. It is Uganda’s role as regional policeman which has most benefitted the West in recent years. Its 40,000-strong army is engaged in more foreign countries than any country other than the USA, most notably in the Democratic Republic of Congo, Somalia and South Sudan. It acts as a regional gendarme for imperialism.

This is clearly what lies behind US unease at the election process; Uganda has to be stable to perform its function and only if it does this will the Americans look the other way. The State Department released a highly critical statement on the elections:

“We are deeply troubled by the many credible reports of security force violence during the pre-election period and election irregularities during the polls… We reiterate our intention to pursue action against those responsible for the undermining of democracy and human rights in Uganda.”

When US Ambassador Natalie Brown tried to visit Kyagulanyi, while under house arrest, she was prevented from doing so, triggering more angry protests. The EU has likewise condemned the violence, irregularities and intimidation.

However, it is significant that the UK, which was the colonial ruler of Uganda for 68 years, was far less combative, welcoming the “relative calm passing” (!) of the election and calling for “the peaceful resolution of disputes”.

It is Britain’s response, for once, that provides the more reliable guide to the West’s actions. Their priority is stability for their profit making and the provision of “boots on the ground” in central and eastern Africa’s hotspots. Their preferred option to achieve this is through a managed change of leadership within the NRM, though the US is clearly prepared to sound out Kyagulanyi either as an alternative or as a lever to force change within the ruling party.

The youth, women and working class of Uganda also need to combine their forces to drive Museveni out. To do this, let alone to shake off the imperialist vice on Uganda and the region, they will need more than what Kyagulanyi and the NUP are offering.

During the crucial days after the election, Kyagulanyi was silent – except to say that people should be non-violent and rely on the courts – even when the youth were crying out for a lead. But Kyagulanyi is a career politician, for all his celebrity status. He has said that he considered his movement neither left nor right wing, but “pragmatist”, a clear indication that he would be willing to ditch his more radical commitments once in office.

Instead what Ugandans need is a workers’ party, based on the urban and rural working class, committed to cancelling the foreign debt, land reform, cheap loans and mechanisation for the small farmers, and education, training, jobs and a living wage for the youth. Such a party will have to be internationalist, forming alliances with the poor across the region instead of sending soldiers to clamp down on their movements.

The party will also have to adopt a programme of permanent revolution, combining the democratic tasks of establishing free and fair elections, removing the army from civil life and full equality for women and youth with socialist measures to rebuild Ugandan society under workers’ control and ownership of the means of production. Such a party would not rely on charismatic leaders like Bobi Wine and would not lie down after elections, but would be a fighting party that can lead the resistance all year round.