Turkey: Erdogan moves to strengthen his rule after coup failure

AFTER a series of bomb outrages, including the killing of 41 people in Istanbul’s Ataturk Airport on 29 June, the resumption of the war against the Kurds and the expulsion of legal parties from Parliament, one might have thought that no report from Turkey could come as a shock anymore.

The events of Friday night proved this to be wrong. As the first pictures were broadcast of soldiers cordoning off the Bosporus Bridge in Istanbul and fighter jets thundering over Ankara, it was immediately clear that this was an attempted coup. Since the 1960s, Turkey has been shaken by several such attempts, some successful, as in 1960 and 1971, and some not, with one reactionary government replacing another and the losers always being the common people. There was also a so-called memorandum coup in 1997 when the Islamist Welfare Party prime minister Necmettin Erbekan was driven from office and the party was forced to dissolve itself.

The reactionary legacy of these coups can still be seen today in the anti-union laws which date back to the military coup of September 12, 1980. At that time, up to 650,000 oppositionists were detained, including the leaders of the left movements, 50 of whom were hanged, and all parties were banned. Thousands were tortured and a large number “disappeared”. That coup compares with the worst Latin American ones; Chile and Argentina. Since then, military interventions have restricted themselves to forcing elected governments out of power.

With the increasingly authoritarian government of the Justice and Development Party, AKP, under Prime Minster Binali Yıldırım and President Recep Tayyip Erdoğan, and because of the weakness of the various opposition forces, calls for such a coup were being raised again. They came, above all, from the camp of the secular Kemalists represented by the Republican People’s Party, CHP, which opposes the increasing Islamisation of the country since the AKP came to power in 2003. Since the CHP had always supported earlier coups, it was not immediately clear how the night would end. The parliament in Ankara and the headquarters of the secret police were bombed, soldiers shot any police who did not voluntarily withdraw, a curfew was imposed and state television was occupied and a declaration broadcast that the army had taken over power.

Shortly after that, Premier Yildirim, announced that the government would resist the coup. President Erdogan was nowhere to be seen, according to rumours he had tried to reach the airport and there was speculation that he intended to flee to Germany. However, shortly afterwards, he appeared on mobile phone screens which were then broadcast live, calling on the people to pour out onto the streets and squares and gather at the airports to fight against the army. As is normal in an Islamic country, this call was then broadcast more widely from every mosque in the country. This was the decisive point. AKP supporters confronted the army on the bridges, even when tanks were firing into the crowd, outside the AKP headquarters, crowds waved the flag of the Republic and chanted Allahu akbar!

Meanwhile, the opposition parties, first the Nationalist Movement Party, MHP, and the CHP and, shortly afterwards, the left wing People’s Democratic Party, HDP, all issued statements opposing the coup, with the first two even declaring support for the government. As soon as it became clear that the army as a whole did not support the coup, but only some sections of the air force, the Navy and the gendarmerie, its defeat became certain.

By Saturday morning, 265 people were dead, including 161 loyal security forces and civilians, and over 1,000 soldiers were imprisoned. Some soldiers were flogged and killed and even decapitated on the streets. The same soldiers who had been celebrated as martyrs in the war against the Kurds now became traitors to the Fatherland. In his speech on Saturday morning, Erdogan characterised them as terrorists who must be dealt with as such. The army was to be fundamentally purged and Yildirim suggested that the death penalty could be reintroduced.

Because it was known that the traditionally Kemalist army was always a danger for the Islamist government, Erdogan had already begun this purge in 2011. He accused the forces behind Friday’s coup of being financed from Pennsylvania, the current location of Fettulah Gulen the religious preacher and public enemy number one, or two, depending on the situation in the conflict with the Kurds.

Selahattin Demirtas, co-chairman of the HDP, spelt out its position in his speech:

“The putschists do not want to bring democracy, they only want to take over the existing anti-democratic system. Yesterday showed once again very clearly that democracy comes from the streets. Those who have always criticised us in the past for calling on people to take to the streets, were last night saved by those on the streets. The right partner for discussion is on the streets not in the Palace. It is legitimate to defend oneself against a putsch on the streets.”

However, those who were on the streets were for the most part the hard-core who clearly were prepared to fight to defend the Palace and Islamism. They were joined by the unorganised AKP voters who wanted to defend their leader. There was no call by the left to take to the streets against the coup, which was a serious political error because it implied either a tacit support or, at least, a belief that the outcome would make no difference to the situation facing the working class and the oppressed.

The HDP and other left parties were right to issue clear condemnations of the coup. Of course it was, and remains, very difficult to organise a rapid mobilisation of unarmed people for an armed confrontation. However, a successful coup would have been not only a defeat for the AKP and Erdogan but also for the Left and the workers’ movement because it would have been accompanied by the suspension of all democratic rights. It would, therefore, have been necessary to argue not only to go onto the streets but also for political strikes, closure of communications and transport against the putschists.

The fact that the coup was quickly overwhelmed by the AKP’s mass base shows that it had scarcely any basis of support in the population. The greater part of the army and the repressive apparatus refused to support it, likewise all the political parties and social forces. Very significantly, the imperialist powers wanted nothing to do with such an adventure.

On the evening of July 15 and into the morning of the 16, while it was unclear how strong the coup was, it was necessary to mobilise against it, obviously without expressing any faith in, or support for, Erdogan’s regime. It was absolutely vital to warn that he would use victory to consolidate his own authoritarian regime and wipe out all political opponents. How real this danger was could already be seen during the confrontation.

Therein lies the weakness of the HDP’s politics and its leader Demirtas who equated the AKP’s struggle against the coup with the struggle “for democracy”. With its collapse, the situation changed fundamentally and with it the main political tasks of the workers’ movement, the youth and the nationally and socially oppressed. Erdogan is now trying to use the coup to his own advantage and even greets it as a “gift from God”.

There are two reasons why the Turkish left did not take to the streets independently of the call from the AKP. Firstly, since the last elections, the left is in deep crisis. It can scarcely mobilise any forces to defend basic democratic rights. Secondly, Demirtas is trying to curry favour again with the AKP and in principle apologises for the Kurds who are claiming their right to self-determination. Such a leadership, already threatened with many years of imprisonment and, at the same time, recognising the dwindling strength of its support, would not call for a stand to be taken against both of the armed forces on the streets, neither of which was promising a democratic constitution. At the latest when the first hand grenades were thrown by the police at the soldiers on Taksim Square, it was clear that this was a struggle between two reactionary forces.

Taking a position against the coup should in no way be linked to a defence of Erdogan and his armed forces. The danger implied by Demirtas’ statement is to equate the victory of the AKP mobs on the streets with a victory for the democratic people. That is really no different from what Erdogan says, and he thus comes out of this situation greatly strengthened. He will now concentrate on the immediate introduction of a presidential system in order to prevent any further insurrections. Already, in the course of today, Saturday, July 16, 2,700 judges have been deposed.

The main danger now is that Erdogan and the AKP government will move to abolish many remaining democratic rights in the name of “defending democracy”. Having played his role as victim perfectly, his objective now is to complete the counter coup which the left must equally decisively oppose. An effective defence of democratic rights will only be possible if the political left forms a united front with the trades unions and all democratic forces.

Whilst it is absolutely right to support neither the coup nor the government, this should not be taken to mean lapsing into passivity until the two forces struggling over the dictatorship wear each other down. Whether or not the democratic forces, with their current strength and without international support, are able to go onto the streets against the lynch mobs and Islamist terrorists is not the key question. They would be bound to fail just as at the beginning of the Syrian revolution.

The absence of a strong a party which fights in the interests of democratic internationalists and secular youth and the working class is shockingly clear at this moment. Therefore, it is all the more important that the international left takes a position of supporting the comrades in Turkey in their struggle against Erdogan’s autocratic rule while the Turkish left mobilises and arms itself for the struggle to defend democracy and workers before the last sparks of hope are extinguished and a dictatorship is finally consolidated.

This article was originally published at www.fifthinternational.org 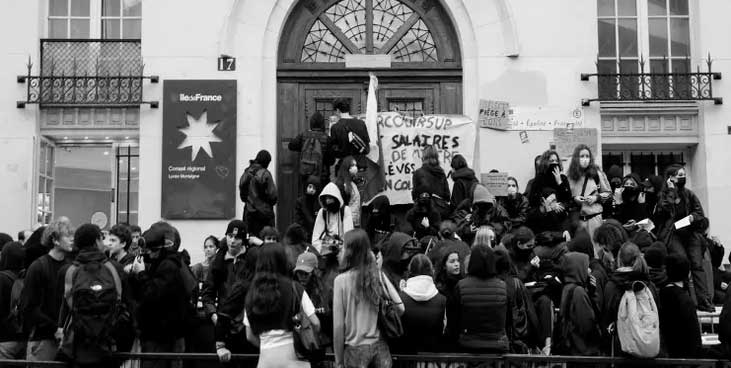