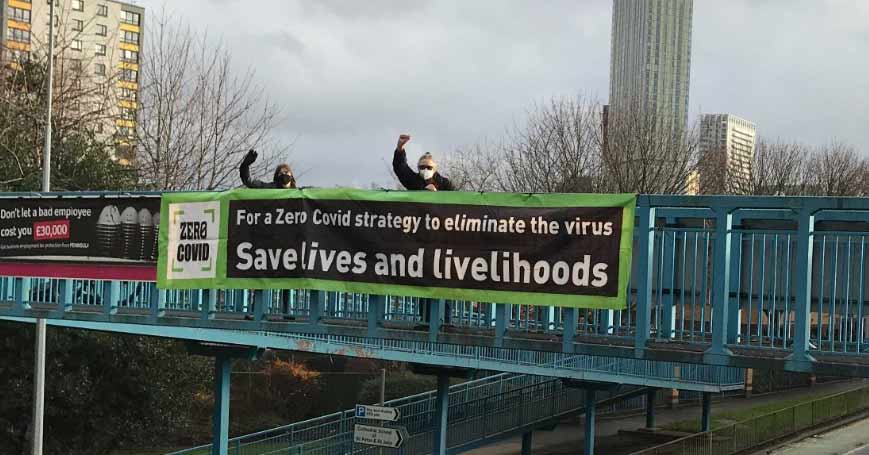 The return of Covid – public health before private wealth!

The government’s callous attitude towards the health of its citizens, in particular the old and vulnerable, is once again on full display. As predicted, the onset of winter has brought with it a rise in cases, hospitalisations and deaths. Coupled with this is the threat posed by the recently discovered Omicron variant, which has exposed Britain’s perilous approach to controlling the virus as they now scramble to limit the damage. But the Tories systematically place private wealth above public health.

Early signs are that Omicron may be both more transmissible and more resistant to the vaccine than previous variants. Until more is known precautionary measures need to be put in place to offset a potential catastrophe. In addition there is a wider international issue at play; until the vaccine is made accessible to poorer countries, more variants will inevitably emerge with the possibility that one of them will evade the vaccine. But this is barely mentioned by the media or politicians.

The advent of Omicron saw the British government rush to add South Africa and several other nations to its ‘red list’. Only UK citizens and residents can enter from a red list country; anyone else is refused entry. Those allowed to arrive will now need to pay £2,285 to quarantine in a government approved hotel for ten days – unaffordable for most.

Such quarantine measures, however, have proved largely ineffective. In contrast the government has refused to take this approach domestically. Sajid Javid has reinstated mask wearing on public transport, in shops and school corridors, but not in the hospitality industry. Mass gatherings such as concerts are proceeding as normal. The cheerleaders of big business in the right wing media are desperately agitating against any lockdown before Christmas.

Five trade unions, representing 3 million key workers in health, transport, retail and education, had already warned the government that another wave of coronavirus could overwhelm the NHS. The Scientific Advisory Group for Emergencies (SAGE) echoed the call: ‘Earlier intervention would reduce the need for more stringent, disruptive and longer-lasting measures.’ With the end of furlough and cuts to Universal Credit, many workers have little choice but to risk infection or suffer real hardship.

There is no sign that the Tories will take the necessary precautionary measures to combat the new dangers. Boris Johnson admits the pressure on the NHS is ‘significant’ but in reality he is only concerned about the pressure he faces from big business. If left up to him, serious measures would only be implemented in response to the imminent collapse of the NHS, by which time it will be too late.

Egged on by the tabloids, baying for the ‘restoration of our freedom’ (to infect others), they have vehemently opposed the return to any restrictions. Sajid Javid is still denying the need for implementing Plan B, beyond the reintroduction of limited mask wearing. With vaccine efficacy waning after five months, the rate of vaccinations falling to half that of April, a new variant of concern being analysed and hospitals preparing for a flu epidemic, doctors and scientists are in despair.

It is the working class, especially the vulnerable and those working on the frontline, that will suffer most during a fourth wave. Many low-paid or manual workers cannot afford to take sick leave or are unable to work from home. The Government needs to urgently reinstate lockdown measures before the situation deteriorates further. In the past, delays in introducing lockdowns have resulted in thousands of preventable deaths.

Any such measures will, however, be ineffective without reintroducing a full package of support, including a reintroduction of furlough and sick pay that provides 100% of wages, protection from eviction for those in arrears and full mandatory protective equipment for any workers who are necessary to keep society functioning.

Regardless of whether Omicron proves to be a mass global killer, the past two years have shown that the virus cannot be dealt with on a national basis. It is constantly mutating, particularly in those countries with high rates of poverty, where lockdown measures are impossible and where access to the vaccine is non-existent.

While two-thirds of Britons have been fully vaccinated, less than 1% have in countries like Haiti, Uganda and Yemen. The UK has ordered enough vaccines to be able to donate 100 million doses a month without denting its own programme. Yet it refuses. More than this, it refuses to relax patent rules on the vaccines for fear it would affect the profits of the pharmaceutical companies by allowing nations around the world the ability to produce their own.

Public health must come before private wealth. Nationalise the pharmaceutical companies and increase global vaccine production and distribution – for free. We need to aim for the complete eradication of covid with a global plan to bring healthcare in underdeveloped countries up to the standard of the imperialist centre – a World Health Service free at the point of delivery. This is not a fight between nations but a struggle against the capitalist system that puts profit before people and the planet.