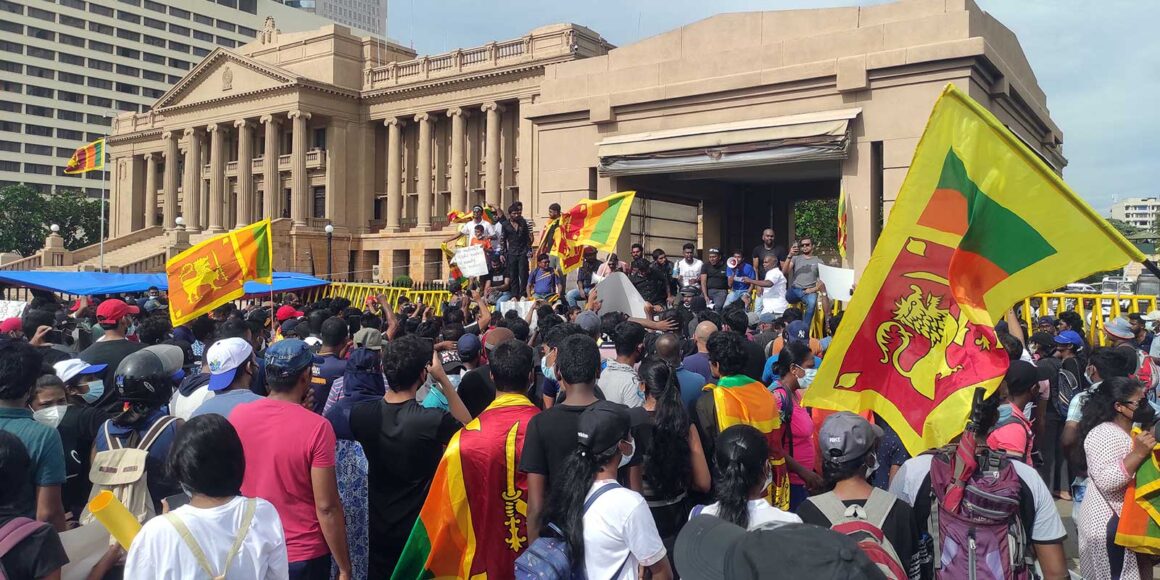 Sri Lanka: For a Constituent Assembly!

Rajapaksa is sending his thugs to kill us”, that was the one line message sent to the League by a supporter at the protest camp on Galle Face Green in Colombo on May 9. The Rajapaksa in question was Mahinda, the Prime Minister, but the attack was no doubt supported by his brother, Gotabhaya, the President.

Killing opponents has been a permanent feature of the rise to power of the Rajapaksa clan, but not this time. This time, the political opponents, the mass of protesters camped outside the presidential office for seven weeks, turned the tables. Rajapaksa’s thugs were rapidly engulfed, some were captured, the rest fled.

The attack at Galle Face turned out to be a last desperate throw of the dice, within hours, the Prime Minister had resigned, leaving the President to deal with the biggest crisis in Sri Lanka’s history. At the heart of that crisis is economic bankruptcy as a result of government policy. Reportedly, the Central Bank has just $50 million left. Debts, however, total tens of billions.

The entire system is just as bankrupt politically. Proof of this came with Gotabhaya’s attempts to form a coalition government from the main parliamentary parties. One by one, the leaders turned down his proposals. All bar one, that is. In the end, the prospect of office was enough to tempt the leader of the United National Party, UNP, Ranil Wickremesinghe, to accept the offer. He is familiar with the role having been Prime Minister five times before – although he has never served a full term in office.

At one time, the UNP was seen as the “natural party of government” in Sri Lanka, representing the urban elite to whom the British handed power when they left in 1948. In the last general election, in August 2020, however, it gained just enough votes to give it one MP. That is now enough to give that MP, Wickremasinghe, the premiership. So much for democracy.

No doubt, between them, the President and Prime Minister will now try to put together an administration. Equally likely, other parliamentary leaders, whilst publicly denouncing the government, will quietly suggest they could, nonetheless, support particular policies with which they agree. In the present situation, of mass protests and demonstrations throughout the country, most will agree that the last thing they want is an election.

Repression of the mass movement is a constant threat – already the army has been ordered to shoot without warning at anyone breaking the renewed curfew. Beyond that, the remaining option for Gotabhaya Rajapaksa would be to call in the military, either to enforce the dispersal of the demonstrations and a strict State of Emergency or even to impose Martial Law. It is not clear whether the General Staff would agree to this but, clearly, the existing mass movement has to recognise the possibility.

Away from the governmental manoeuvring, organisations such as the Trade Union Coordinating Centre and the Collective of Trades Unions and Mass Organisations called for a general strike beginning on May 11. This is the most promising feature of the entire Sri Lankan crisis. It is within this movement that the seeds of a transformed Sri Lankan society can develop.

The grassroots organisations necessary to spread and maintain the strike, the provision of food and other supplies to strikers and the building of links above the local level, can all be used to revive and rebuild a working class movement that collapsed after the defeat of the 1980 general strike.

That potential, however, is neither automatic nor guaranteed. There are thousands of small trade unions, that could play a key role in this revival. However, many of them have links to liberal and bourgeois political parties. Their members should demand the ending of all such connections. Socialists should argue not only for the amalgamation of small and ineffective unions into mass, democratically controlled organisations but also for the formation of a new workers’ party, rooted in the unions.

The workers’ movement should also draw in women’s and students’ organisations. Already, the Inter-University Student Federation, strongly influenced by the Front Line Socialist Party, has played a leading role in the “GotaGoHome” movement. Every effort should be made to coordinate and integrate such youth movements into the workers’ movement at all levels.

What unites all the different strands of the movement at the moment is the demand for Gotabhaya Rajapaksa to resign as President. Socialists should certainly support that demand, but they also need to go beyond that – if he goes, what then? The crises that have shaken Sri Lanka for decades surely prove that the existing political system cannot serve the interests of the mass of the people.

The movement should raise the demand for a Sovereign Constituent Assembly that can determine how the country is to be ruled in the future. The movement created to remove the Rajapaksa clan should itself control the convening of such an Assembly, guaranteeing equal voting rights to everyone living and working on the island.

Within that, socialists will argue for a workers’ and farmers’ government, based not on parliamentary constituencies but on their own organisations and recognising the right of the Tamil population to self-determination and, if they wish it, secession.

To deal with the economic crisis it will be necessary to nationalise, without compensation, all the major sectors and to subject them to democratically accountable planning in the interests of the great mass of the population. All debts to foreign banks and corporations, taken out by successive capitalist governments, should be renounced and an appeal made to the workers of the world for support and solidarity.