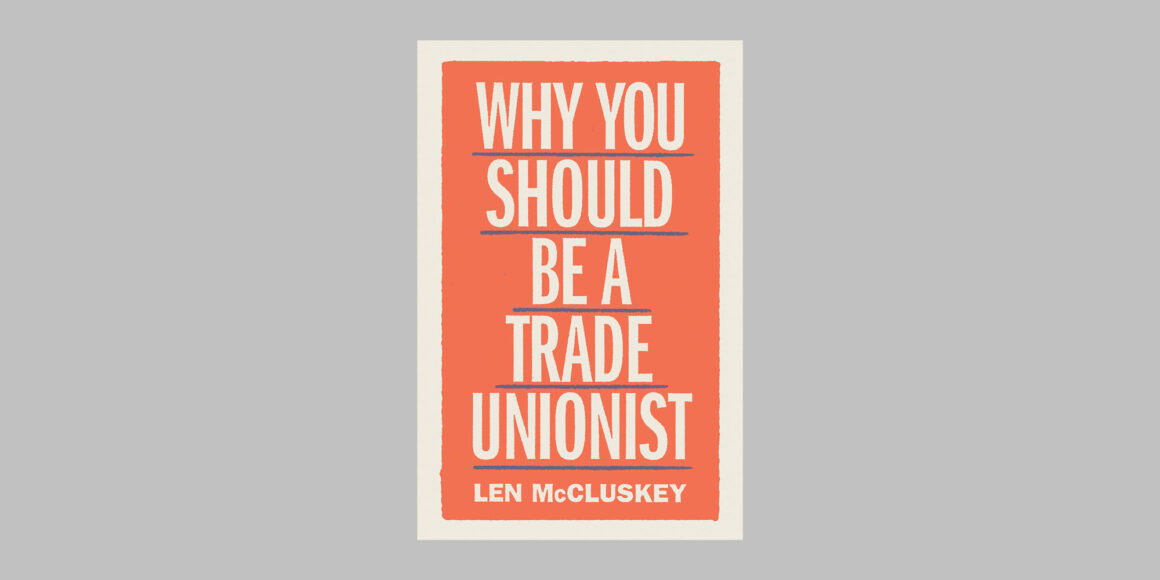 Len McCluskey’s short book, Why You Should Be A Trade Unionist, published by Verso in 2020, is in many ways a disappointing read. Despite its short length – less than 140 pages divided into eight chapters – it still manages to be rather boring. The recently retired (although still sitting at the time of publication) General Secretary does not achieve much clarity in the book, flitting between different themes and ideas without fitting them into an overall argument. It is partly an argument for the continued relevance of trade unions in modern society, mixed in, often incoherently, with a defence of McCluskey’s own record as General Secretary of Unite.

Despite this, the book is interesting in places, in that it reveals, often accidentally, McCluskey’s own view of the world and a trade union leader’s position within it. In many ways, its disconnected and confused style reflects the contradictions inherent in McCluskey’s world view.

One of the most glaring contradictions in the book is that McCluskey at times attempts to set out a vision for the role trade unions might play in the modern world, while completely ignoring the fact that he has been in a unique position to bring such a vision to reality for more than a decade and has completely failed to do so. For example, in the first chapter McCluskey states that his aim is to make an argument for the need for trade union organisation in the face of deregulation and casualisation. The book reads as a “pitch” for trade unionism towards modern casual workers, almost implying that it is their failure to recognise the importance of unions which is the problem.

The importance of trade unions can only be demonstrated to these workers by the unions themselves through practical action, and few people in Britain were better placed to do this than Len McCluskey himself. He, and Unite under his leadership, largely failed to achieve this. There has been no mass unionisation drive of gig economy workers by Unite, no serious attempt to organise new industries.

It is telling when McCluskey discusses what he sees as the more positive elements of his time as Unite General Secretary. In particular, he highlights setting up Unite’s massive £35 million strike fund, and his implementation of the union’s ‘leverage’ based organising strategy through its Organising Unit.

There have been many important wins because of leverage tactics, and McCluskey is right that the knowledge that workers cannot be starved back into work, due to the existence of the strike fund, is important in ensuring that employers can be forced to take threats of strike action seriously. However, in discussing both these things, it is clear that McCluskey views them as important tools in negotiation, expedient ways that the union can force bosses back to the table and get a better deal. The reader thus gets a glimpse of the role of trade unionism as McCluskey understands it – the use of muscular tactics as a negotiating tool. This requires a centralisation of power and resources to the leadership of the union, which necessitates the reduction of power and independence of rank-and-file members.

There is one theme that emerges throughout the book, which goes to the heart of the limitations of McCluskey’s approach to trade unionism and politics. He repeatedly insists that a partnership between trade unions, employers and the state would be of benefit to society as a whole.

Although, at points, McCluskey talks of the need for a socialist society, it is clear that, for him, such a society is one where there is a partnership between union leaders and employers mediated by the state (preferably in the form of a Labour government). He talks favourably of the German model of capitalism, where workers have seats on company boards, and unions are treated as “partners”. For all the radical language and talk of a robust approach towards employers, this is his paramount ambition – a place in the halls of power for trade union leaders like himself.

This is in a sense understandable, given McCluskey’s own social position. Union leaders’ role in capitalist society is to fight and horse-trade on behalf of workers for a ‘better deal’, and they therefore see their own inclusion in capitalist institutions as a valuable way to achieve that. ‘Left’ union leaders, like McCluskey, may take a harder line in negotiations and be more willing to use industrial action to leverage a deal, but their understanding of their place in the capitalist system is essentially the same as those on the right. It is only on the level of tactics where they diverge.

Why You Should Be A Trade Unionist is therefore only unintentionally interesting. It is worth noting that McCluskey did, as he opens the book discussing, begin as a young trade union militant on the Liverpool docks, and his lifelong commitment to trade unionism should be commended. His genuine affection for the working-class and its movement shines through in the book, as it did throughout his career.

But his record as leader of the UK’s largest union for a decade was desultory, and this cannot be forgotten when reading his own defence of it. His role in shutting down the 2011 public sector pension dispute, his failure to put up a fight in defence of jobs at Grangemouth, his failure to carry through the democratic reforms to the union promised in his first election, his opposition to mandatory reselection of MPs during Jeremy Corbyn’s leadership of the Labour Party and numerous other times when his leadership failed to deliver on the radicalism promised in all his speeches throughout his tenure as General Secretary, should all be remembered.

These, however, were not just the result of personal failings. As the book amply demonstrates, they are a result of a conservative worldview that sees the role of the unions as mediators between workers and capital, rather than leading the former in overcoming the latter, which itself is a result of his own contradictory position as a trade union bureaucrat in a capitalist system.

As McCluskey says, in the book’s brief discussion of the 1926 General Strike:

“Unfortunately, the history of trade unions is littered with examples of rank-and-file trade unionists being let down by their leaders.”