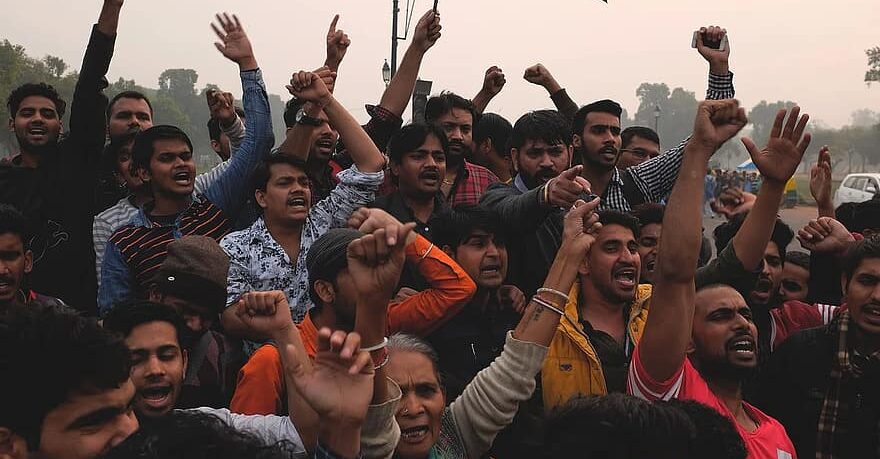 Indian farmers and farm labourers are engaged in a massive struggle to repeal three agricultural laws that will deregulate and further privatise the rural economy. In this struggle they have the support of India’s working class, which in November once again broke its own record for the largest one-day general strike in history.

Over 300,000 farmers and their supporters are camped on the borders of New Delhi. They are resisting Prime Minister Narendra Modi’s anti-farmer laws. On 26 January a march headed by thousands of tractors clashed with police in Delhi as protestors breached the barriers surrounding the historic Red Fort. Modi has tried to use the “violence” to divide them from the huge public support they have been enjoying, especially from the working class.

At the time of the Green Revolution in the 1950s and 60s the Congress government introduced a system whereby government guaranteed a “minimum support price”, especially for rice and wheat sold via agricultural markets called mandis, run by the states.

Modi sees this system as a block to the complete capitalisation of agriculture and the expulsion of “surplus” population from the countryside. Already state-run Special Economic Zones (SEZs) have grabbed land for industrial development. But stolen land is also used for luxury housing for the county’s growing middle class, with golf courses and private gardens, where villages once stood.

This latest struggle against the Modi and Hindu chauvinist government comes against a background of an economy devastated by a brutal and ill-managed response to the pandemic. In the initial March lockdown tens of thousands of migrant workers were forced to walk hundreds of kilometres to their home villages, as all transport was halted.

Unemployment rocketed to 24 per cent. There have been spiralling covid cases and deaths, many that are undercounted, as several Indian states do not add suspected cases in the final count, against World Health Organisation advice.

When Modi was elected in 2014 his victory was secured by only 30 per cent of the vote but a landslide of seats, thanks to the undemocratic first past the post system. Big business gave their blessing to Modi believing that he could rival the feats of China and become Asia’s second economic powerhouse.

Modi’s background is in the Rashtriya Swayamsevak Sangh (RSS), a paramilitary right wing Hindu nationalist group, which has over 50,000 branches and arms training camps. It originated as an anti-British group in the 1920s but fiercely anti-Muslim. It was heavily influenced by Mussolini and Hitler.

The RSS is said to have a membership of 5-6 million now. Sangh Parivar is the umbrella term used for a variety of Hindu organisations spawned by the RSS, with the Bharatiya Janata Party (BJP) being its political wing.

The RSS is based on a religious supremacist ideology, Hindutva, which threatens to plunge the second most populous country on earth into devastating communalist conflict. It fights for a Hindu state in a country with 200 million Muslims and 30 million Christians, condemning them to second-class status. It advocates increased oppression for Dalits, women and sexual minorities.

As Chief Minister of Gujarat in 2002, Modi was widely blamed as fomenting riots, in which a thousand Muslims were murdered. Even US President Bush refused him entry into the States, though this was reversed by Obama.

Hindutva is embodied the Citizen’s Amendment Act (CAA), passed in 2019, which allows migrants of any religion except Islam to become Indian citizens. Combined with the National Register of Citizens it could alter the whole basis of Indian citizenship, potentially disenfranchising millions of Muslims.

The state of Assam, with its large immigrant population, has already been through the exercise. Being one of the poorest states many of its citizens do not have official ID papers, excluding them from the register and making them vulnerable to detention and “statelessness”. This drew protests from across India, particularly in the universities. Protestors were met with police brutality and killings.

Also in 2019 Modi stripped Jammu and Kashmir, a Muslim majority country, of the limited autonomy it had. The Indian army strengthened its occupation, declaring a state of emergency. More recently eight states have passed anti-conversion laws, targeting so called ‘love jihad’, whipping up fears that Muslim men are using marriage to convert Hindu women to Islam, in effect criminalising interfaith marriage.

It is important to recognise the real elements of fascism within the Sangh Parivar movement and the BJP. Clearly the RSS has a long history of organising pogroms against Muslims; it is a paramilitary organisation and has a mass basis of “cultural” and sporting organisations.
It is closely linked to state forces as well. Last year’s riots in Delhi were predominantly attacks on

Muslim areas, targeted by Hindu mobs and many reports of police joining in. Most of the 53 dead were Muslim and the trigger appears to be a BJP leader calling for the police to clear the streets after a sit-in protest by women against the CAA.

If the above characterises Modi’s Hindutva policies, then the core part of his strategy was always to streamline Indian capitalism along lines acceptable to big business. The pressure for change has accelerated since the 2007 global crisis and resulted in massive attacks on the working class and farmers. Chief among these are new labour laws, designed to entice global manufacturing monopolies into India, especially those that might want to avoid China.

New codes on wages, occupational health and safety, industrial relations and social security have been drawn up to replace 44 old laws. One example allows for the immediate dismissal of up to 300 workers without explanation or approval from the authorities. Previously, the limit was 100. The laws curtail the rights of workers, increase the working day, open the road up to more privatisations and radically reduce restraints on the bosses in pursuit of their profits.

Alongside these anti-labour laws Modi has broadened his sights to include the farmers. Farmers are demanding the removal of three laws passed last September. The laws would allow corporations to purchase crops, without fees or taxes, at market prices. This would end the minimum support price and lead to corporations stockpiling commodities in order to manipulate prices.

Similarly, farmers are demanding the withdrawal of the electricity amendment bill. This would stop the supply of free electricity to farmers. These reforms have already resulted in rising food prices for workers and exacerbated the plight of the poor, who already spend most of their income on food.

Numerous regional and trade union organisations responded to these new draconian laws by calling the biggest ever general strike on 26 November last year. Over 250 million workers and farmers joined the one-day strike, paralysing the economy. This was the second and biggest general strike of 2020, a sign of Indian workers’ rising militancy.

Public and private sector workers joined together, alongside many farmers’ unions and students, as demonstrations and rallies took place throughout the country.

Over 250 farmers organisations, united in the All India Farmers’ Struggle Coordination Committee, supported the general strike. In return the unions gave their support to the farmers’ “Chalo Delhi” (Go to Delhi) mobilisation on 26 and 27 November. Hundreds of thousands of farmers, organised in 31 unions, joined the march, aided by students and transport workers.

By the beginning of December up to 300,000 marchers had blocked Delhi, with support from Congress and Communist Parties. Police and paramilitary forces have repeatedly attacked the march with tear gas, batons and water cannons.

Many of the farmers are from Punjab and Haryana but there have been protests and support from farmers across India, including in Western Uttar Pradesh, Kerala and Tamil Nadu. Two months later and the farmers and their families are still arriving, with farmer camps set up at the various borders of Delhi, with langars or communal kitchens to cook the food. Over 50 people have sadly died due to cold, heart attack and even suicide.

Despite government attempts to label the marchers “terrorists”, Maoists or separatists, the movement has shown an amazing degree of inter-communal and inter-caste solidarity. It started off with Sikh farmers and labourers but soon mobilised Hindus and Muslims from across India.
The main slogan of the march is ‘Kisan-Mazdoor Ekta Zindabad’ Long Live Farmer-Labourer Unity,

which also expresses solidarity between the Jats, a community who in Punjab constitute 25 per cent of the state’s population but own most of the land, and the Dalits, who constitute 32% of Punjab’s population, own only 2.3% of the agricultural land and are therefore mostly farm labourers. There have previously been sharp struggles between Jats and Dalits over access to communal lands.

On 26 January an enormous march, including thousands of tractors and motorbikes, drove into Delhi on Republic Day, breaking through police barriers, with some invading the famous Red Fort. Marchers returned to the camps but the press launched a hysterical campaign blaming the farmers for violence. This is preparing the ground for a state attack on the camps.

In the aftermath the state government ordered protestors to vacate the Ghazipur camp and sent in the riot police. After a standoff the police retreated. At the Singhu camp 200 men from Hindu Sena, a far right Hindu chauvinist group, attacked farmers with suspected police connivance but were repelled by the farmers.

Clearly the struggle is approaching a critical stage. The government has been stringing out negotiations endlessly, in the hope that demoralisation and weariness sets in.

Right now the working class and their unions need to offer a lead that goes beyond one-day strikes and expressions of solidarity. There needs to be joint and permanent resistance to the anti-farmer and anti-labour laws, combined with a struggle against low wages and the effects of the pandemic.
The unions must be made to mount an indefinite political general strike, one that can paralyse the economy until Modi caves in. Trade unions and farmer organisations should set up workplace and village/district councils of action that can organise and lead such a strike.

Democratic bodies like this can then tap the vast reserves of anger at Modi and the big capitalist and multinational land-grabbers. They can become a rallying point against all forms of oppression, including caste, national and women’s oppression – and a barrier against all those who incite hatred.

In the face of state repression and Hindu chauvinist attacks it is vital that adequate self-defence is organised on an inter-communal basis. If this is done the movement can force the unconditional withdrawal of Modi’s laws and his anti-labour measures.

It could then take the offensive to oust Modi and open the road to a workers’ and farmers’ government, which can develop India’s industry, agriculture and services on a democratically planned basis.