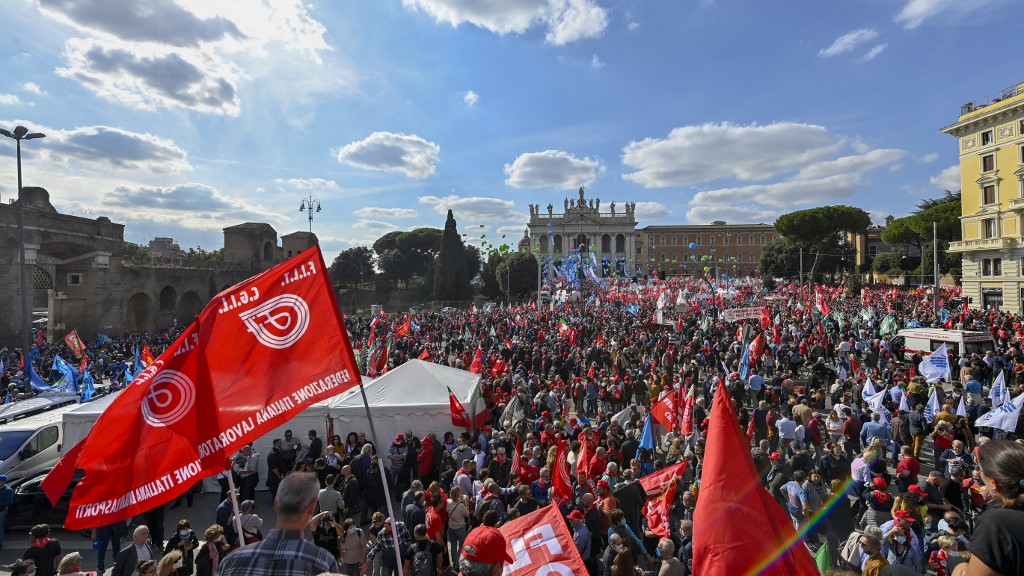 ON SATURDAY 16 October tens of thousands attended an anti-fascist demonstration in Rome, called by the CGIL trade union, in response to a fascist attack on the union’s headquarters the previous week.

On 9 October thousands of people had attended a protest against the Green Pass, a covid passport which provides proof of a vaccination, a recent negative test, or recent recovery from infection.

Giuliano Castellino, leader of the far right Forza Nuova party, instigated the attack from the stage of the rally in People’s Square:

‘Do you know who allowed the Green Pass to become law and the fact that millions of our compatriots are living under blackmail and at risk of unemployment? They have specific names: CGIL, CISL and UIL. Do you know what free citizens do? They go to besiege the CGIL … Let’s go and get everything that is ours.’

In a deliberate imitation of the Capitol riot in Washington, protesters marched to the Italian parliament. After police repulsed their attempt to break in, the fascist-led mob attacked the CGIL offices. Despite the fact that a leading politician announced the attack in the centre of Rome, the police allowed the rioters to wreck the building.

Politicians from Italy’s governing parties condemned the attack, with the leaders of the Democratic Party and Five Star Movement calling for Forza Nuova to be disbanded. But workers can have no confidence in the capitalist parties who are ruling in coalition with Matteo Salvini’s Northern League.

Senator Salvini—who supported the coalition but did not join the government—has been inciting his supporters to oppose the covid measures, which his party’s deputies have voted for.

Green Pass
The background to these demonstrations is the government’s decision to make the Green Pass, which had already been required for public places and some jobs, mandatory for all workers on 15 October. Those who refuse have to pay for tests totalling €180 per month – well over 10% of the average wage. Those who breach the rules face unpaid suspension and fines of up to €1,500.

Most Italians support the covid certificate and so far, the anti-vax movement has been dominated by populist and far right organisations, mobilising small and medium sized business owners whose profits are threatened by the costs of covid restrictions. The anti-fascist demonstration called by CGIL—which supports the mandatory certificate—outnumbered the anti-vax rally by ten to one.

But the extension of the pass to all workers triggered strikes and blockades at ports around the country by Cobas, USB and other syndicalist ‘rank and file committees’, who are demanding that the government make tests free for all workers.

The government says mandating the pass would ‘make workplaces safer and the vaccine campaign stronger’. The same government refused to lock down until strikes closed workplaces after thousands had died and lifted the first lockdown too early triggering a deadly second wave. Its newfound commitment to workplace safety is both cynical and selective.

The real reason is more prosaic. With the harvest due and Christmas preparations in full swing, Italy’s bosses are desperate to avoid another lockdown.

Italy has one of the highest vaccination rates in the world, with 80 per cent of people over 12 fully vaccinated—but there remain almost 2.5 million unvaccinated workers. Vaccine resistance is highest among older workers and migrants, while the EU refuses to approve the Sputnik vaccine.

The greatest possible vaccine take up across the world is desirable but socialists should oppose mandatory vaccination, which is counterproductive and potentially discriminatory. The unions should push for a massive expansion of public health and information campaign, under workers’ control, which puts workers’ safety ahead of profits. This would would be far more effective.

Capitalist crisis management
The response of the capitalists to the pandemic, in every country, has been guided by the protection of their profits. Instead of rapid and massive investment in healthcare, workplace safety, vaccine education and the public procurement and distribution of the vaccine according to an international plan to eliminate the virus, the bosses and their governments have campaigned for a return to ‘normality’, i.e. the uninterrupted accumulation of private profit.

The Green Pass will make the vaccine campaign ‘stronger’ through simple capitalist logic—get vaccinated (and work) or starve. The pandemic is therefore a class issue.

We say—no one is safe until everyone is safe. The question of fighting for ‘zero covid’ is a political question of deciding whether society’s resources should be directed at producing profits or saving lives through a worldwide elimination campaign.