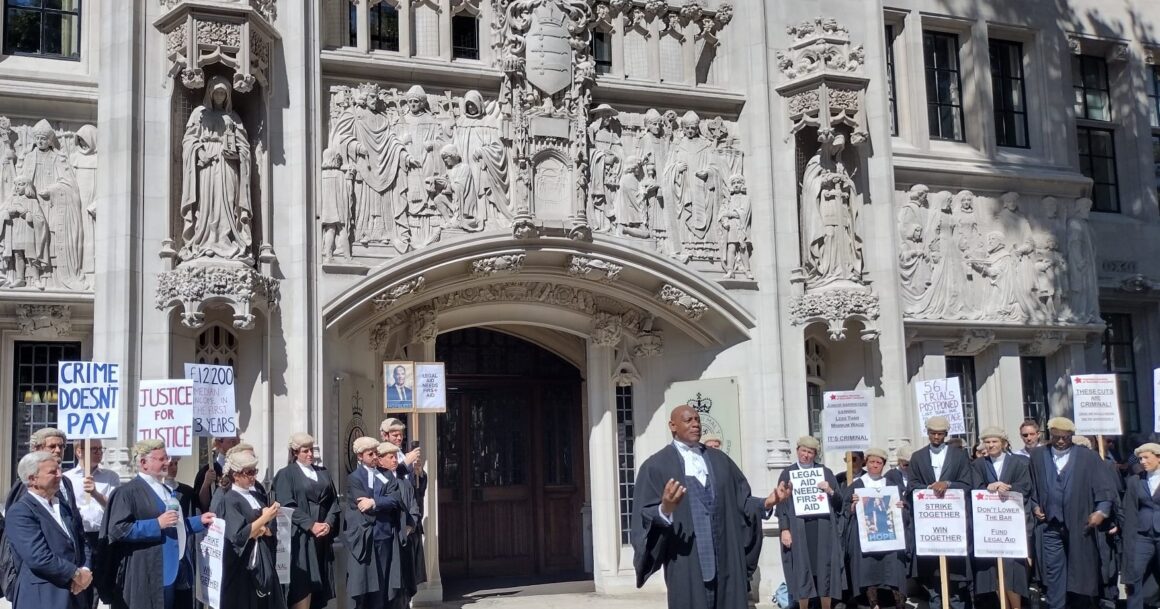 Interview with a striking barrister: “We will wear them down”

As industrial militancy rises again in Britain for the first time in many years, criminal barristers have joined the strike wave. Workers Power spoke to Saul Brody, a striking barrister from Manchester, to discuss why the strike matters, the problems in the criminal justice system, and the impact of these issues on those affected by them. Full analysis of the strike will follow at a later point.

WP:     Could you provide some background about the strike and how it has been progressing so far?

SB:      The strike is a result of a dispute over the level of fees for criminal aid work. We started strike action on 27 June. We are engaging in the strike as individual members of the Criminal Bar Association (CBA).

In the first week we didn’t work on Monday, then we escalated the action by one day per week. Once the strike reached five days, we started striking every other week for the whole week. We also aren’t currently accepting returns.[1]

Some hearings are still proceeding, particularly those which involve a vulnerable person where it would be unjust not to proceed. Everyone is taking the hit together, both senior and junior barristers. We will be doing five days in, five days out until our demands are met. We are sticking together for the future of the criminal bar.

WP:     What are the issues that have led to the barristers’ strike?

SB:      The strike is a result of chronic underfunding – the criminal justice system has faced a 28% decrease in funding over the last 10 years. Junior barristers are suffering the most. In the first five years the average salary of a criminal barrister is only £12,000, below the minimum wage.

The criminal bar has lost 300-400 junior counsel in the last year. There is no one new coming through – there are lots of applicants but they’re not necessarily the best people. Many of the best barristers are going into commercial work due to the highly increased fees available. Some people can still do criminal law, but they need to either be very committed or independently wealthy.

Some mainstream newspapers have covered these issues. However, no-one is covering unjust delays for victims, witnesses and judges – the delays have been unconscionably long. The situation is creating chaos in the courts. Trials starting in 2018 are still yet to be resolved. It isn’t getting better, it’s getting worse.

This is not a result of COVID – it is due to a chronic shortage of courts, judges and barristers. The Ministry of Justice doesn’t think it is a priority to sort out court buildings which causes further stress on the whole system.

The whole criminal aid budget is tiny – less than £1bn a year. Compare that to £17bn lost through fraud. This is excluded from the official statistics – in effect, the statistics lie to the public about the effectiveness of the criminal justice system.

Many witnesses and victims are called into court multiple times and say “I’m not coming back, I’ve already been here 3 times, taken time off work, and I’m not coming back”. The government likes that, because it leads to abandoned prosecutions which relieves pressure on the system without the public being aware.

This applies particularly to rape cases, in which victims are regularly dropping out due to issues with the system.

Underfunding also poses a threat in terms of diversity. This impacts oppressed minorities who lack the opportunity to take the gamble on trying to become a criminal barrister. This leads inevitably to a profession full of white, male middle class people.

We are being encouraged regularly to look at diversity to attract people who are representative of the community in this country. Criminal law can’t be just a rich man’s hobby – we need to have criminal barristers from different backgrounds.

SB:      We are asking for a 25% increase in fees for criminal defence work. The government are offering 15% but have said that this will not apply to the backlog of existing cases. This would mean that no one would want to touch old cases – the pay rise needs to apply to all cases from this point forwards.

Criminal barristers regularly give their time freely in order to make the system work. We don’t get paid for a lot of what we do. The rates of pay are just so bad. At my level there are some well-paid cases which compensate, but the junior barristers don’t get that. I’m doing okay personally but this is about the future of the bar.

It’s a horrible situation to be in because I have clients who are not being dealt with. We all want to be working. The CBA has been trying to get Dominic Raab to listen, but of course he can now just blame the backlog on us now due to the strike.

WP:     How do you think the strike can succeed?

SB:      We are going to wear them down; we’re not going to give up. The cost-of-living crisis has    pushed people to the edge – many are having to rely on their savings or going into debt in order to cope.

The truth is that there aren’t a lot of fat cat lawyers in the criminal bar. We are looking to the rank and file, not the top few.

There have been some demonstrations – I have been on two so far. There has been some mention of this in mainstream press and support from a few MPs. We are in a very difficult situation at the moment because none of the politicians in the Tory party, or Labour even really, want to say they support barristers. The Tory leadership election is going to give us a bunch of idiots who don’t know how to run the country. We are going to get somewhere. We are currently stuck on the point about whether the pay offer will apply to backlog cases. We also need an indexed-linked pay system controlled by an independent body, as at the moment our pay rises are fully in the control of the government. The pay cuts have gone too far.

[1]  This is where a case would be unable to proceed in the absence of one of the parties, usually because the barrister has been double-booked, were it not for another barrister covering the hearing for their colleague through goodwill. The barrister who covers the hearing often receives little or no fee for doing so.