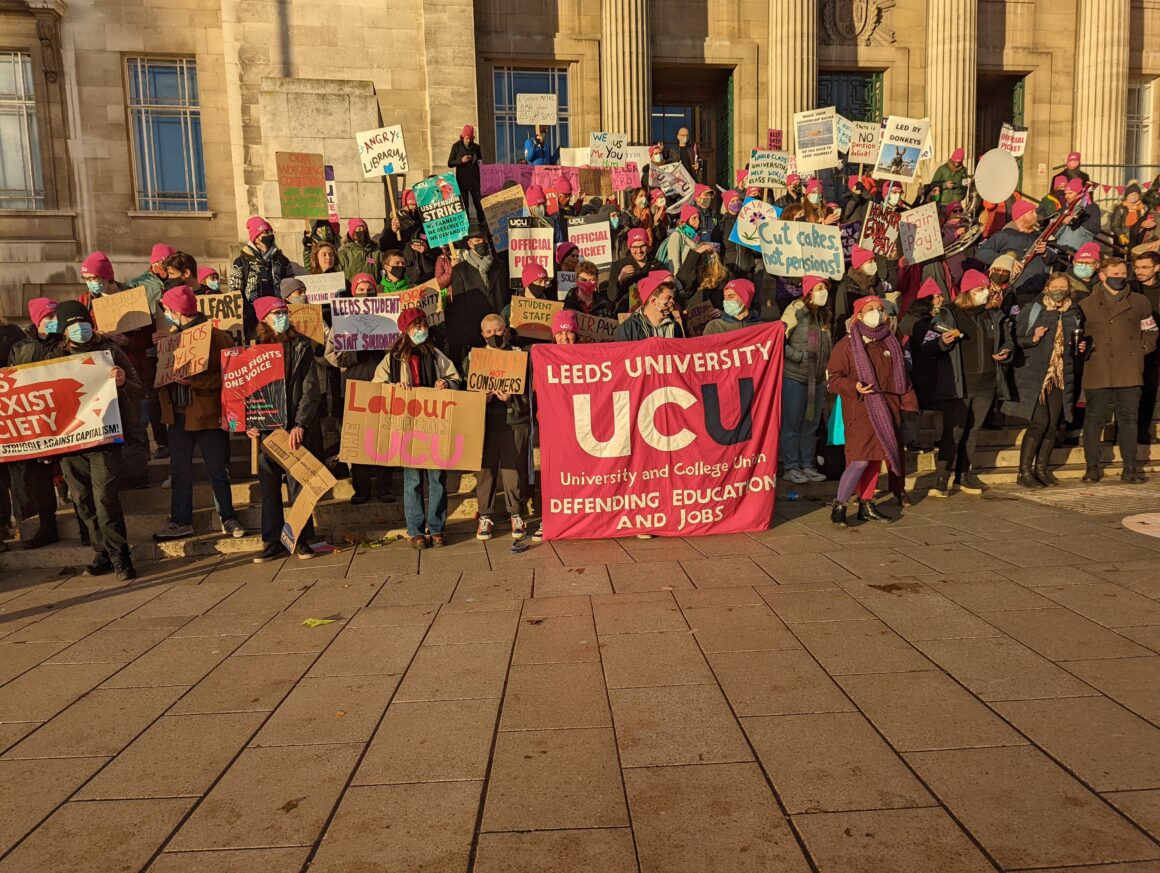 THE HIGHER Education strike has seen vibrant picket lines and a fighting mood up and down the country. University workers in the UCU and Unison are striking in separate disputes against further cuts to the pension scheme for pre-1992 universities, and for improved working conditions as part of the ‘Four Fights’ campaign, and against the employers’ insulting 1.5% pay rise for the majority of staff.

The current round of action will conclude with a national student walkout organised by the National Union of Students on Wednesday 2 March. With support staff like security and cleaners on the picket lines, those universities affected by the strike could be (and should be) closed for health and safety reasons. The student walk out is a great way to build solidarity with the strikers and focus students’ anger on university management, foiling attempts by Universities UK (UUK) to blame the unions. The students should use the day as a launching pad for a student movement taking up their own demands.

As we go to press UCU activists are locked in a debate over escalation with the union’s leadership (Higher Education Committee). As a result, 2 March may be the end of this round of action, as the leadership stresses a long battle to defeat falling real pay, casualisation, workload hikes, unequal pay for women and minorities (the UCU’s ‘Four Fights’ campaign) and defend the pension cut. However, if the action slows down, universities will press forward with a push to make lecturers reschedule the lectures they missed on strike, or dock their pay (effectively making workers pay twice). Meanwhile summer is fast approaching, when the universities go quiet and strikes will be much less effective. The time to escalate is now.

The planned cuts to lecturers’ pensions of 35–40% are totally unnecessary given the pension fund’s assets of £92 billion, which has been deliberately undervalued by the USS pensions fund in order to claim a deficit. It is this that the universities are ultimately stealing – even free market loving Financial Times editor Martin Woolf says that the pension scheme is sound.

The UCU leadership had already de-escalated the struggle even as the strike dates were named. They decoupled the pension strike from the ‘Four Fights’ pay and conditions dispute, against the decision of the Branch Delegates Meeting, and UCU congress policy. The result could be seen not just in weaker picket lines, but also UUK’s response. Isolating the issue, after the union put forward compromise counter proposals in August and January, failed to stop the USS pension scheme voting to support the proposed cuts on 22 February, even as workers were striking. Separating the issues means isolating and weakening them. Proposing compromises while the bosses won’t budge weakens the union’s position as a whole. The response can’t be to scale down the battle but instead to build to an all-out, united fight in the coming weeks.

The HEC’s timid strategy won’t work given the aims of the government and university management, clubbed together in UUK. It is part of the neoliberalisation of universities, turning students into a commodity and the education sector into nothing more than a route to bringing income in from abroad. The cuts boost university surpluses, which they will use to invest in buildings and facilities to compete for lucrative international students who pay two to three times as much as a domestic student.

A Leeds UCU activist told a picket line rally that Leeds University (LU) was showing a £110 million surplus this year. Even with a planned £94 million in capital expenditure in the form of swanky new buildings to put on glossy brochures for prospective students, that leaves a significant annual surplus. Meanwhile over half of LU’s annual £400 million income from tuition fees comes from overseas students, showing the scale of the university sector’s transformation. Nationally and on every campus staff and students should mount campaigns to open the books and see where all the money is going.

There is an alternative to this corruption; free grants and no tuition fees, including for international students (as it was before the Thatcher government) and taxing the rich and business to fund a higher education service under the control of students and staff.

Now a Branch Delegate Meeting (BDM) is being held again to consult the grassroots on escalation, with the UCU Left arguing for indefinite action. That would be a big step forward, but what if the HEC fails again? Picket lines should hold mass meetings to back escalation, regardless of the HEC and even the BDM, and demand escalation demand escalation, a united “five fights” action, and coordination with Unison – Unison workers can do the same.

The UCU Left has put forward proposals that strengthen members’ voices, such as for BDMs before every HEC meeting and special conferences to allow members a say at crucial points. These proposals should be supported but don’t go far enough. Elections for the UCU National Executive Committee end on 1 March, and as the left states, ‘who runs our union matters’, but workers need not just a more leftwing leadership but a complete transformation in the relationship between the rank and file and the executives.

All officials should take the workers’ wage and pledge to be immediately recallable. The UCU left rightly argues (and narrowly lost the conference vote) for essentially a BDM to run strikes, but even here delegates should be elected from mass meetings and strike committees to control the action. A rank and file movement campaigning for this transformation, and for a genuine rank and file leadership, is the only way to stop the conveyor belt of elected lefts moving to the right in office, with no way to replace them in the middle of strike action, when it counts, with leaders willing to lead a fight.