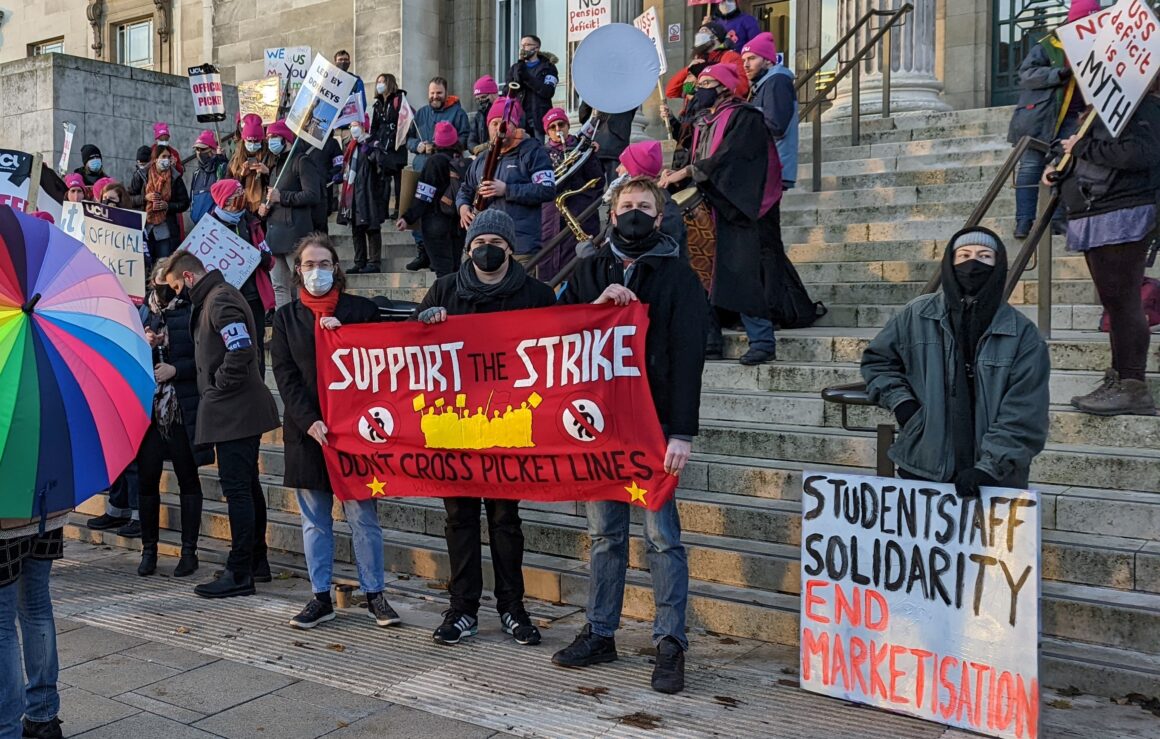 Rank and file must keep UCU strike on track

The University and College Union (UCU) has confirmed a new wave of strike action at 68 universities in February and March.

This follows the three-day strike last December in defence of their USS pension scheme and for better pay and working conditions. Since then, 42 universities have been re-balloted, but with only 12 further branches passing the anti-union threshold of 50% to join the walkouts.

Since the announcement of the re-ballot results, the union leadership have prevaricated on the next steps forward and sowed confusion in the ranks. At a Higher Education Committee (HEC) meeting on 18 January, a motion calling for escalating and indefinite action was narrowly voted down. This was despite strong support from the Branch Delegate Meetings (BDMs) the previous evening for escalating strike action. Instead, the HEC passed a series of recommendations that effectively decoupled the pension dispute from the ‘Four Fights’ dispute over pay, equality, workload and casualisation, contravening a motion passed at Congress to keep the disputes ‘coupled’.

This decision prompted an open letter from UCU branch delegates (mostly UCU Left supporters) to HEC members politely enquiring how they voted on the motions and expressing concerns about the decision-making process in the union. It further made the point that the decisions taken at HEC did not reflect the BDMs’ expressed support for escalation and keeping the two disputes together.

Following the HEC meeting, UCU general secretary Jo Grady outlined a set of new proposals offering the USS Joint Negotiating Committee (JNC) a ‘way out’ of strike action. With negotiations due to begin in early February, the union leadership finally announced 10 days of strike action beginning on 14 February. Many of the strike dates, however, fall during reading week or half-term, causing minimum disruption to university management.

Attempts by university management to drive a wedge between staff and students have been effectively countered by student solidarity groups, which were a constant feature on the picket lines during the last phase of strike action. One of the UCU strike dates will coincide with an NUS national student strike on 2 March. If effectively combined with UCU strike action, this has the potential to both shut down campuses and lay the basis for future joint struggles against the corrosive experiment in education marketisation.

Confrontations between management and staff over pay and conditions have also seen Unison ballot their members in Higher Education. They are rejecting a measly 1.5% pay offer – a real-term pay cut when inflation is taken into account. The ballot failed to reach the 50% threshold for legal action, though UCU and student pickets can still encourage Unison members not to cross.

Escalating strike action beyond symbolic strikes lasting a few days is key to winning this dispute. With the attempted sell-out of the 2018 dispute still fresh in many members’ minds, the latest manoeuvrings from the leadership underline the importance of rank and file control of the strikes. UCU Left’s latest branch motion calling for an urgent meeting of branches to coordinate and propose industrial action is very welcome. More concretely, they should call for the meeting to elect a recallable strike committee to keep the dispute on track and guard against capitulation.