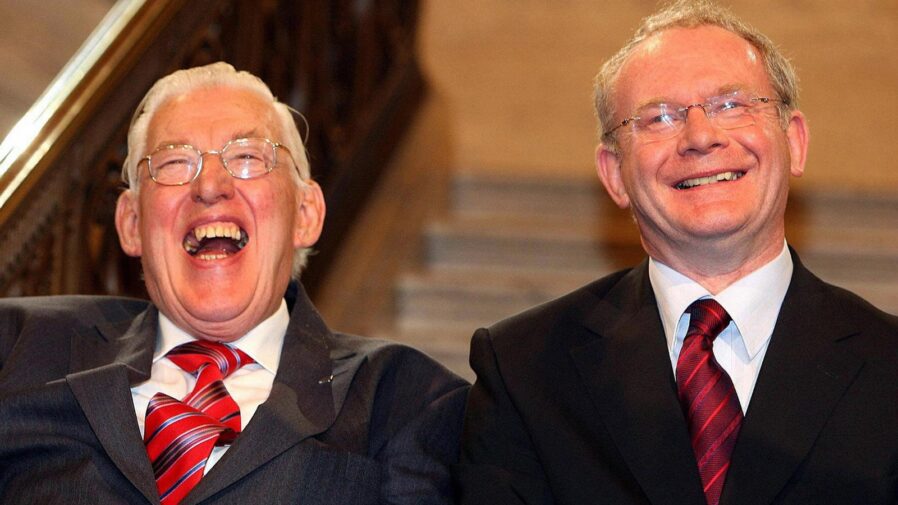 THIS YEAR marks the twentieth anniversary of the signing of the Good Friday Agreement (GFA). The ‘peace process’ that this initiated between the British state and Sinn Fein/ Irish Republican Army (IRA), with ceasefire followed by decommissioning of IRA arms and recognition of the police, was crowned with a power sharing government based on an elected Stormont Assembly. But twenty years later the Stormont Executive and Assembly have lain in a state of collapse for over a year and the GFA has clearly unravelled.

The two leading parties in the north of Ireland, the Democratic Unionist Party (DUP) and Sinn Fein, have been unable to agree a way forward on a range of issues such as an Irish Language Act, legacy and single sex marriage. The DUP’s role in the Cash for Ash scandal was yet another crisis of corruption that sparked the collapse of Stormont. The Brexit result has also added another intractable dimension to the future of the GFA and the likely end of a ‘soft’ border between the north and the Republic of Ireland.

Some staunch supporters of the GFA fear that peace itself will be threatened. There is no immediate likelihood of this happening but the desirability of any kind of border has been questioned quite sharply in the north and south of Ireland. Historically this has always divided Unionists from Nationalists/Republicans but now a compelling economic argument for unity has surfaced as it becomes clear that a hard border following Brexit from the European Union would be disastrous for both the northern and southern economies.

As Theresa May’s Tory government, propped up by the DUP, muddles its way through Brexit negotiations, a toxic cocktail of hard Brexiteers and Unionists has emerged. Tory politicians Owen Paterson, Daniel Hannon and Jacob Rees-Mogg fear clinging on to the GFA will stall Brexit, Labour’s Brexiteer unionist Kate Hoey says the GFA “is not sustainable”. All this is music to the ears of the DUP, a party that was never too keen on sharing power with Catholics in the first place. This kind of attack on the GFA harks back to the days when the Unionists ruled without any consent or participation from the Nationalist/Republican community at all.

Arrayed against this “irresponsible behaviour” are of course the architects of the GFA. Chief among them Tony Blair pleads with politicians to “cherish” the GFA, as does Bill Clinton and Sinn Fein. Jeremy Corbyn also commends the GFA, saying, ‘the Good Friday Agreement was a defining moment in Irish history which allowed peace to prevail’, paying tribute to Tony Blair’s role. We are asked to believe that Blair the warmonger has somehow morphed into a peacemaker on Ireland or that somehow peace with justice had been achieved.

In fact neither scenario is credible. Blair’s drive for peace was consistent with the interests of British imperialism and backed to the hilt by then US president Bill Clinton. For Blair and successive British governments the prime objective was always disabling the Republican resistance – doing so with the assistance of Republicans themselves was a useful bonus. Peace was on Britain’s terms. Peace without addressing the injustice of partition guarantees future conflict and a pro Union state condemns a minority community to playing second fiddle. No justice here!

The main driver of the GFA was Sinn Fein/IRA, against a backdrop of war weariness and the failure of the IRA guerilla campaign to secure a united Ireland. Without their willingness to call a ceasefire and negotiate, none of this would have been possible. The other main driver of the deal were the hardline Unionists of Ian Paisley’s DUP. Their willingness to share power was a sure sign of Sinn Fein’s climbdown.

The power sharing project was in itself a reform quite different to the historic running of the north by the Unionists. Many in the DUP were never sold on the idea. Some of the more blatant forms of discrimination had been whittled down since 1968. This was not down to peace deals but to the mass struggles of Catholics over thirty years including the armed struggle. But the northern Orange state had not been smashed and the border was still there.

Crucially the GFA acknowledged the northern statelet’s right to exist so long as the majority of the population in the six counties desire, i.e. the Unionist veto.

The resulting power sharing Executive rested on an elected and devolved Assembly at Stormont, based on a sectarian headcount and a sectarian hand out of resources that benefited the leading political and middle class elements in both communities. In line with its anti working class nature it has faithfully implemented British government austerity measures as dictated by the hand that feeds it at Westminster. Stormont has clocked up serial scandals in particular those that have beset the DUP. No change here!

The repression that saturated Catholic areas throughout the war years has been scaled down but is still there and now selectively used against political opponents of the GFA. There is still a form of internment without trial, or more accurately interment on remand, strip searching in prisons, constant harassment of republican activists, even Diplock non jury courts still exist. In short the state is still a sectarian bulwark of the Union.

No matter how welcome peace might have been to a war weary population, the partitioned state still existed and its border served to deny the right of the Irish people as a whole to decide the future of Ireland. The GFA has copper fastened the border with the same old Unionist veto. A border which has from its inception in 1921 completely divided communities and economic hinterlands with accompanying levels of social deprivation.

In its recent coverage of the GFA, the BBC would have us believe that the thirty year war in the six counties was a “sectarian war” with British troops acting as peacekeepers. But the reality is quite different. Britain was not neutral, it propped up a state that was inherently sectarian from birth. This was not a religious war, it was a war against British occupation.

Ireland was partitioned in 1921 against the backdrop of a war for Irish independence and a Treaty which split the forces of Irish resistance down the middle. Northern Ireland came into being on the basis of a sectarian headcount. The border guaranteed a Unionist majority of 67 to 33 per cent in what amounted to six of the nine counties of Ulster. The history of ‘Northern Ireland’ since then involved widespread and systematic discrimination of the Catholic minority. A minority that identified with an Irish nation and were treated as second class citizens as punishment.

The gross civil rights abuses were eventually challenged by a mass civil rights movement in 1968. The Unionist state’s response was to baton protesters off the streets and this triggered a mass anti Unionist rebellion. Catholics failed to secure meaningful reform and the brutal response from successive British governments, as in the massacres of Bloody Sunday and Ballymurphy, pitted them against a state backed by British troops and a sectarian police force.This boiled over into a struggle to ‘Smash Stormont’ and drive out the British along with their border.

The struggle took many forms, from rent and rates strikes, demonstrations and pitched street battles with the forces of the state and a guerilla campaign of bombings and shootings. The peace process that culminated in the GFA was an acknowledgement from Sinn Fein/IRA that it had failed to drive the British out and secure a united Ireland.

In this sense Sinn Fein made its peace with the Unionist state. Yes it still claims to want a United Ireland and is campaigning for a border poll to realise this, yet it fully respects the Unionist veto. The calling of a border poll can only be decided, that is vetoed, by the British! Even Sinn Fein’s demand for Special status for Northern Ireland within the EU is not a serious transitional arrangement towards a united Ireland.

Sinn Fein has committed itself to share government with one of the most reactionary parties in Europe. As a result it has no strategy to overcome Unionist intransigence on single sex marriage, the Irish language, legacy, etc and worst of all has shared in the implementation of draconian austerity from Westminster. Now that direct rule from Britain has taken over from the collapsed GFA institutions with DUP approval, Sinn Fein can only plead for the GFA once more. This has been the price of republican disarmament. A sectarian peace, but peace without justice!

Sectarianism has not diminished since the GFA and every so often sectarian tensions intensify especially when the DUP finds it necessary to whip up loyalist fervour. The DUP’s role in the ‘flag riots’ in 2013 is a case in point. The GFA cannot resolve the democratic deficit at the heart of the northern state. A Unionist veto consigns the minority and their political representatives to a permanent subordinate role. Power sharing is a clever way of concealing this, at least for a time. But the contradiction of having a British border in Ireland will always burst forth.

The Labour Party should be at the helm of a campaign to withdraw Britain from Ireland and despatch the reactionary Unionist state to the dustbin of history. The GFA has brought that goal nearer not one jot. Jeremy Corbyn and other Labour supporters of a united Ireland should break completely with the notion of ‘Unionist consent’ (a la GFA) and campaign for immediate British withdrawal and for the Irish people as a whole to determine the future of the border.

Workers here have no interest in the remnants of a colonial presence in a country that British imperialism has brought so much ruin and misery to over the years. We have every interest in siding with those republicans and socialists fighting for a united Ireland but more importantly as part of a fight for a socialist Workers’ Republic.