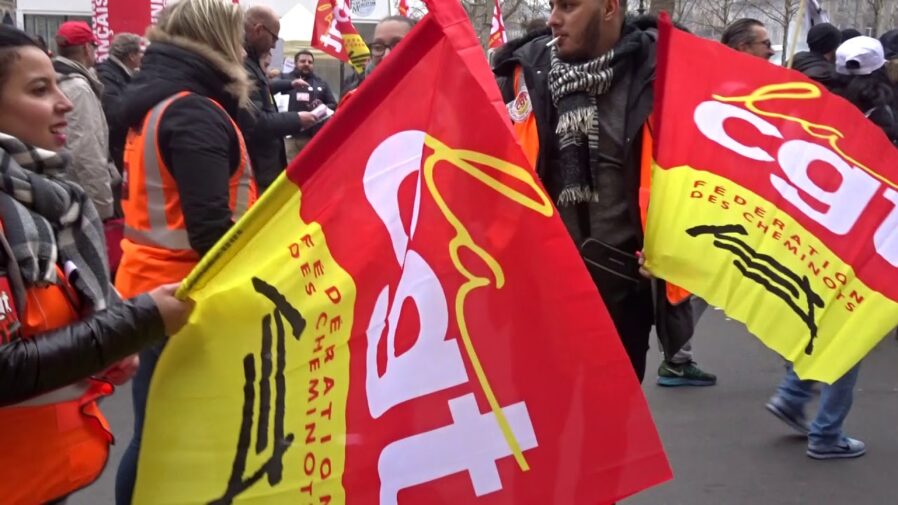 PARIS – Strikes and demonstrations have taken place across France in a day of action called by a united front of most public sector unions. The action has been called in response to a new law which targets the rights of railway workers, as a precursor to a general offensive against the 5.3 million strong public sector.

In just four pages and 8 articles, the draft law is a renewal of President Emmanuel Macron’s offensive against the rights and protections of French workers, which started with his reform of the Code du Travail last year. The state owned railway (SNCF) will be privatised, the state monopoly abolished and railways opened to competition, and 4000 to 9000 km of secondary lines scrapped.

But it is the end of recruitment of new workers under existing terms and conditions that is the principal target. A militant tradition means railway workers have maintained good working conditions and benefits that other sectors have lost over the years. These so-called “privileges” have been the target of sustained attack from the media and political elite for decades, despite the fact that SNCF salaries correspond to the national average, and special retirement conditions have always been removed. In any case, cost is not the main motivation behind the attack – it is the desire to destroy the SNCF workers as a stronghold of militant trade unionism, and one of the few combative industrial sectors remaining that could pose a serious opposition to a general assault on the rights of all workers in France.

Flushed with his success in the last autumn, when his government imposed, without serious opposition, a new employment law (Code du Travail), totally favourable to the bosses, Macron is out to impose a major strategic defeat on this vanguard of the French working class, the core of resistance within the various social movements of the last two decades. Everybody still has in mind the long strike of 1995, when the railway workers paralysed the country for three weeks and in the end inflicted a humiliating defeat on the right wing government of Alain Juppé.

Macron, benefiting from an exceptionally strong parliamentary majority, would like to force through this new “reform” without public debate, by means of executive orders (ordonnances) just like he did with the Code du Travail. These will be just short enabling laws, in effect giving a blank cheque to the government to do whatever it wants. This haste has no real justification apart from trying to cut short the debate in parliament and the country, and to present workers with a fait accompli.

He also intends to take advantage of the political crisis wracking the workers’ movement. Its traditional parties like Socialist Party (PS) and the Communist Party (PCF) are in total disarray, while the far left New Anticapitalist Party (NPA) is severely weakened. For all his rhetorical hot air Jean-Luc Mélenchon’s attempt to usurp them with his populist La France Insoumise movement has failed to get off the ground.

The supposed justification of European Union (EU) requirements for liberalisation are a transparent excuse. Today’s weakened EU, preoccupied by more pressing questions, could not force a French government to privatise its railways. In reality, Macron’s government intends to do what the French bourgeoise has been demanding for decades: turn a modern and dynamic public service into a private cash-cow. In subordinating everything to the bottom line, railways will be restricted to high speed links between the main cities and local trains in dense urban areas. Users in rural, working class and impoverished areas are outside the scope of this business plan.

The opening of the market, as well as a clause that will oblige railway workers to accept any new job in the sector, including for private companies, will result in a deterioration of working conditions, while whatever remain of the current conditions will be in constant danger. By attacking SNCF, Macron is also pursuing a major political victory that will open the way to further “reforms” of the public sector.

One of Macron’s principal campaign promises was to cut the number of public sector workers by 120 000. Similar “reforms” are in preparation, including the local authority administration, school and health services. Macron aims to replace job security (“jobs for life”) for state employees with insecurity (“flexibility”): short term contracts, lower wages, low or no pensions etc.

An open champion of neoliberalism, praising individual economic success as the only important criterion, Macron dreams of a ruthless reshaping of French economy, which still relies on an important public sector. Although his campaign was perfectly clear about his intentions, he has so far faced little resistance to his deployment of the shock doctrine.

However, the current wave of attacks will not go through without some serious class struggle. On March 22, some 150 demonstrations, involving several hundred thousand people, took place all over the country for an action day against the government reforms, with SNCF and public sector workers joining forces. This is a clear success, however it opens the question of the next steps. The last similar day of action was in… October 2017.

All the unions in the SNCF have rejected the reform and the strongest unions, including the CGT, are calling for strikes in April and May. Unfortunately, the chosen strike tactic is bureaucratic from the very start. It consists of two days per week on strike, decided in advance by the union’s leading committees. The French union tradition, especially in the SNCF, is for unlimited actions, where the strike is decided collectively each morning in each work site by the general assembly (AG) of the workers. By planning the strike in advance for the next few months the union bureaucrats are imposing a stricter control of the struggle from above – useful if they decide to end it.

As might be expected, Laurent Brun, head the of CGT-Cheminots is talking a good fight. “We will take up the challenge. This will certainly be one of the biggest social movements in the history of SNCF,” he said. But it seems Macron may have lost the support of Laurent Berger, head of the CFDT federation who has accused government of  “spitting in the face of railway and public sector workers”. On the Code du Travail “reform” Macron used Berger to split unions and isolate the CGT – a betrayal that weakened the workers’ movement’s ability to resist the current attack.

The struggle of SNCF workers is so crucial that it is necessary for all French workers to actively support it, by taking up their own demands and joining in the strike action. Several other sectors have been or will be mobilised recently: in Air France, the giant retailer Carrefour, EHPAD (workers caring for elderly people), school teachers etc. Students have also been active in the last weeks against a reform of the lycées that will severely restrict access to the universities.

In this context the appeal for solidarity initiated by Olivier Besancenot of the NPA and signed by 16 groups including the PCF, is a step in the right direction. A mass movement and a victory for the railway workers would be a rallying point for the divided French left as well as the unions.

Today’s action was chosen to mark the 50th anniversary of the Nanterre occupation that sparked the events leading up to the historic general strike of May 1968. French workers and youth need to follow the example of that movement – mass street mobilisations, workplace occupations and a general strike controlled by the rank and file. Only a movement of that strength can defeat Macron entire package of reforms. In the struggle workers and young people need to create the structures of self-organisation to take control of the strike and impose their demands not only on the government but on their leaders, ensuring that the movement of 2018 learns from the defeat of 1968 – and goes on to victory.