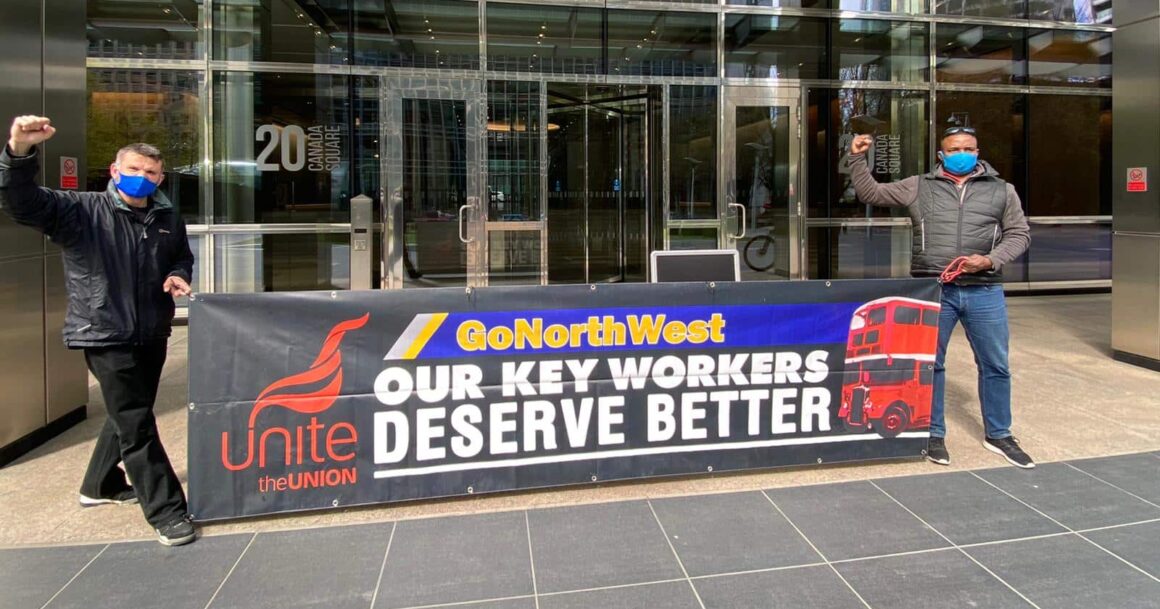 The defeat of the British Gas strike, the first national strike against “fire and rehire” tactics, raises the possibility that even more employers will use this tactic to attack terms and conditions, and the need to escalate resistance to these attacks.

Fire and rehire means workers are sacked and rehired on new contracts or threatened with the sack if they will not sign them.  By bullying individual workers to sign or be sacked, bosses aim to outpace the cumbersome, cautious campaign methods of the union bureaucracy and create facts on the ground before a ballot has even been organised. ASDA successfully launched this tactic against its 112,000 workers in 2019, where the GMB failed to call a strike of its 12,000 members.[1]  But the British Gas defeat is on a different scale, a highly-unionised, skilled workforce that battled for 42 days of strike action.

Employees of Go North West, a bus company operating in Manchester, are in the midst of a hard-fought strike against this same fire and rehire tactic. They have been on strike for over eight weeks to force Go North West to back down and are demanding that Manchester Mayor Andy Burnham bar employers who use this tactic from operating bus services in the city.

British Gas and Go North West are just the tip of a hire and fire iceberg.  A TUC survey in January showed how up to twelve percent of workers – nearly one in eight – had been the been told to re-apply for their jobs on worse terms and conditions, with firms “cynically exploiting the crisis to drive down pay and conditions” in the words of TUC head Francis O’Grady.  Oppressed sections of the working class have been hit even harder by the tactic, with 18 percent of young and 15 percent of BAME workers (compared to 8 percent of white workers) facing fire and rehire.[2]  The corona profits-crunch and conditions of mass unemployment are giving bosses confidence to sack workers and demand givebacks on pay and conditions, and the use of such hardball tactics is only likely to increase.

CEOs, politicians and the media alike all praised key workers throughout the pandemic. Gas engineers worked in homes of covid-positive customers to fix broken boilers and delivered food parcels and medicine, while bus drivers suffered particularly high mortality rates from the virus due to close contact with the public each day. The public’s thanks were real and heartfelt, the praise and doorstep clapping of the politicians and wealthy less so. More and more companies are turning around and demanding cutbacks despite many of them turning a profit, and even more hypocritically having received government assistance in the lockdown. In some cases these are pre-existing disputes, that bosses have brought to a head using covid costs as an excuse.

The Observer (18.04.21) exposed that around nine of the thirteen companies that threatened workers with fire-and-rehire in the last year are profitable, with some even hiking executive pay, while half claimed government support during the pandemic:

Worryingly there were a few such cases in the public sector, with staff threatened by councils, universities and even NHS Birmingham’s Heartland Hospital.[3]  The Tower Hamlets Labour Council was the first to launch the tactic in the pandemic era, in June 2020.[4]

Labour proposes to make such practices illegal, but while Boris Johnson was forced to state that such tactics are “unacceptable” in parliament, his Business Secretary Paul Scully stressed  “it is important to retain the flexible labour markets where we remain 11th out of 140 countries with regard to the ease of hiring and, indeed, firing workers”![5]  With Britain one of the worst hit economies by the pandemic, the Tories will resist any attempts to restrict business “flexibility” to recoup profits.

Like many key workers, British Gas engineers had worked loyally through the pandemic keeping homes heated despite the risks to their health.  Centrica CEOs have trashed the service to pursue their downsizing under the banner of its new “customer-focused business model”, forcing a dispute that has left customers stranded for weeks with hundreds of thousands of emergency repairs uncompleted. The hypocrisies, injustices and exploitation of capitalism have been laid bare by the dispute, a reality that will increasingly wipe away memories of hand-clapping for key-worker “heroes”.

Businesses plead covid losses, PPE costs or falling profits, but pulling the curtain aside reveals a who’s who of top greedy British bosses, often well-known and hated for their past profiteering. At the top of British Gas is Stephen Hester, famous for refusing to return his bonus when the Royal Bank of Scotland’s role in the Libor-fixing scandal was exposed.  Alongside him on the board sits Heidi Mottram, widely criticised for receiving millions in pay while whacking water rates up by 40 percent for Northumbria Water’s customers.[6]  The list goes on – and their shareholders – the usual mix of billionaire investors and hedge funds – are no better.

Capitalism was already facing a profits crunch and recession before the corona crisis brought this forward. The capitalist class is seeking to make workers pay for the crisis while restructuring to restore profitability once the economy revives – if it does.  It is a class struggle, the struggle of an exploiting, owning class to extract more profit from their employees’ hiked hours, cut pay, and increased stress.  Workers should expect more aggressive tactics and fundamental attacks in the coming months and years. As well as fire and rehire, electricians have kicked off a national campaign of protests against deskilling at Hinkley Point construction site.[7]

Workers can’t hold their breath waiting for a Labour government.  Corporate attempts at restructuring and union busting will become a feature of the post-pandemic period, using the virus’ economic effects as the excuse.  The unions need to respond with an equally militant campaign in defence of our jobs, wages and conditions, led by the organised rank and file workers themselves and their militants and strike leaders.

[2] Nearly 1 in 10 (9%) workers have been told to re-apply for their jobs on worse terms and conditions since the first lockdown in March, with “working-class people (12%) are nearly twice as likely than those from higher socio-economic groups (7%) to have been told to re-apply for their jobs under worse terms and conditions.” Presumably some of the latter include white collar or skilled workers however.  https://www.tuc.org.uk/news/fire-and-rehire-tactics-have-become-widespread-during-pandemic-warns-tuc; TUC figures also show other dimensions of hiked exploitation in the corona crisis, eg that women workers have overall borne the brunt of pandemic costs in terms of losing hours, pay or their jobs fullstop, while shouldering childcare and being denied furlough: https://www.tuc.org.uk/workingparents