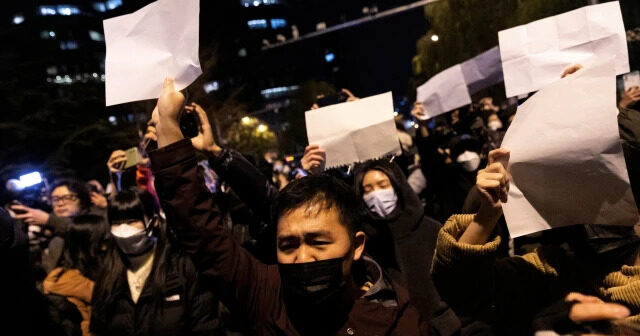 The rapid relaxation of China’s ‘zero Covid’ lockdowns is a direct consequence of the mass protests that have shaken the country. The protests themselves also correct the widespread image of the population being just the ever obedient, unthinking slaves of the Chinese Communist Party (CCP).

The initial response of the one party state, however, was an attempt to suppress the demonstrations. The mobilisations of well trained and equipped riot police make it clear that the regime had long prepared for such confrontations. It knows that its continued rule depends on repression.

Despite the impact of the protests, however, these were not the only factor in the climbdown by Xi Jinping. The decisions by some provincial authorities and local governments to ‘reinterpret’ the lockdown rules, before there was any new decision from Beijing, points to divisions within the CCP itself.

This is not surprising. The lower ranks of the party are in constant contact with the public and also contain tens of thousands of ‘businessmen’, that is, capitalists, who have seen their companies collapse. Party members are also key figures in local government at all levels.

An official in the city of Dongguan was reported by the Financial Times to have said that local governments were struggling to maintain subsidies to keep factories open as they also had to pay for Covid testing. With millions of people having to be tested daily, just to go to work, balancing the books is increasingly difficult.

At the other end of the social scale, according to Forbes’ list of China’s 100 richest people, the fortunes of the country’s wealthiest tycoons fell by 39 percent in the last year. That is not just because of Covid measures—China is also impacted by the recession in the rest of the world. Exports that were expected to grow by 4.5% in the quarter to September actually shrank by 0.3%.

Xi is backing down on more than just Covid restrictions. There has also been a significant relaxation of the financial requirements that affect the all important construction and real estate industries. Restrictions on ratios of debt to capital, the ‘three red lines’ as they were called, threatened bankruptcy for many huge corporations, the best known example being Evergrande.

China’s central bank has extended a deadline, originally set for the end of the year, for lenders to cap their ratio of property sector loans. This means that banks and other lenders have more time to adjust the proportion of their overall debts which are property related. It is intended that the time will be used to complete projects, thereby reducing outstanding debts.

Overall, the prospects for the coming year in China look ominous. The centrality of exports in the economy, previously one of its greatest strengths, is set to become a danger as demand in the rest of the world declines, partly because of rising interest rates, partly because of warehouses still full of unsold goods. Nike, for example, reported in September that its North American inventories were up 65 percent at the end of the third quarter compared with the year before.

With the economy slowing, jobs, conditions and wages will inevitably come under pressure and it will be increasingly important for activists to draw on the lessons of the lockdown protests. The speed with which tactics in one city or region were taken up in far distant places shows that Beijing’s surveillance programmes, powerful as they are, do not stop communication altogether.

Indeed, it has been reported that in the last two weeks, censorship of We Chat and other social media has slowed noticeably, with postings that would in the past have been removed within hours now circulating for days at a time. In itself this may point to rifts within the party state but, even if that is the case, activists on all fronts will need to maintain complete independence from developing factions, just as they must be independent of those capitalists who begin to fall out with the Party.