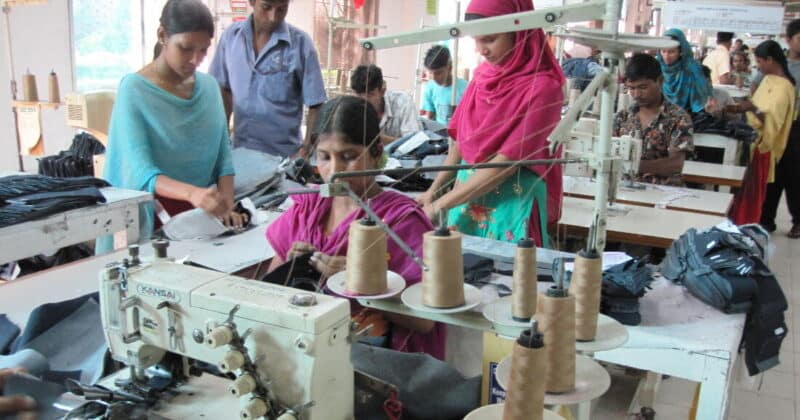 Thousands of Bangladeshi garment workers have lost their jobs due to the coronavirus pandemic. They are struggling to find work and are at risk of destitution. At least 70,000 workers are estimated to have been laid off after £3 billion worth of clothing orders were cancelled or suspended.

The country’s 4,000 garment factories, which employ about four million (mostly women) workers, were closed in March when Bangladesh went into a month-long lockdown. While some factories reopened on 4th April, others remained shut due to lack of demand for their products. Some workers found themselves without a job and were given less than a month’s salary as compensation; others have received nothing at all. Many factories which remain shut have not formally fired their workers, leaving workers uncertain about their employment status.

At least one million garment workers had been fired or furloughed by early April, a quarter of the industry’s workforce. Many high street fashion brands, such as Edinburgh Woollen Mill (Bonmarché, Peacocks), Matalan, Mothercare and TK Maxx, have made no commitment to pay in full for orders completed or in production. This means that many workers are forced to work long arduous shifts without any certainty of being paid their full wage, or even at all.

Nazma Akteris is the president of Sommilito Garments Sramik Federation, one of the largest union federations in Bangladesh, and the executive director of Awaj, an organisation fighting for decent working conditions and gender equality. As a former child worker in the industry, she knows the pressures on working women:

“These workers now don’t know how they will take care of their families in the coming days – how they will manage costs for food, rent and other necessities. They can’t even imagine what they’ll do if they or a family member needs medical treatment for Covid-19. The meager income these workers earned was barely enough to cover their living costs, and as a result, they have little to no savings set aside to deal with a crisis such as this.”

The workers that are employed face the dire working conditions, long hours and poor pay which have now become industry standard. Strikes and protests last year forced the government to raise the minimum wage in the sector by 77% to $68 a month. But union leaders say up to 80% of factories are still not paying it. This is in spite of a rise in exports of 20% in the last half of 2020. Even if their pay rose to the minimum wage, they would still be among the lowest paid garment workers in the world. This hyper-exploitation of the workforce allows companies to maximise profits and is one of the reasons why Bangladesh is the second largest textile producer in the world.

Last month a peaceful protest broke out outside A-One BD Ltd, an Italian garment factory that employs over 700 workers. The workers were protesting the bosses’ failure to pay their wages, severance packages and pensions. They have been promised at least 15 different dates to settle what they are owed but nothing has materialised. Meanwhile protestors have been beaten by factory-endorsed henchmen, blasted with water cannons and attacked in the middle of the night by police.

The pandemic has also brought new challenges. In a recent survey, 96% of garment workers said they didn’t feel comfortable reporting illnesses over fears of losing their jobs; only 38% felt there were adequate cleaning and sanitation measures implemented and maintained. As a result, covid is running rampant through the factories and making workers choose between having enough money to feed their families or protecting themselves and their loved ones from the virus. Due to the high unemployment rate throughout Bangladesh, bosses will always have access to a reserve army of labour; losing some workers does not dent their profits.

“Either open the factory, clear our dues and let’s get back to work,” says Salma Begum, a machine operator who worked at A-One BD Ltd for more than 10 years, “or give us our salaries and the money we saved in the pension funds, and I want to move on with my life. We are behind on paying rent, we are buying groceries on credit, we’re rationing our meals. I can’t go home empty-handed.”

This is the hidden dark side of the rag trade. The mile-long queues outside fast fashion stores when they reopened after the first lockdown show how popular they are. But these brands have protected their profits at the expense of millions of lives; they may adopt the Black Lives Matter slogan but turn a blind eye to millions sweating in their factories, be they in Leicester or Dhaka.

The sustainable fashion movement has been growing over the past 5 years with more retailers now offering sustainable options. However, sustainable clothing simply isn’t affordable for large portions of the working class. Instead of channeling that anger and upset at ordinary people just trying to get by, it should be directed towards the people who truly deserve it: the capitalists who exploit these workers and the callous governments of the world who are allowing this exploitation go on unchecked.

A recent online campaign, #PayUp, went viral over the summer of 2020, with people all around the world using the hashtag and over 270,000 people signing the original #PayUp petition. This campaign has shamed some companies into paying workers the wages they were owed. But #PayUp does not go beyond awareness-raising and so has little leverage to enforce their demands. For too long unions in the West have left the tasks of solidarity to charities, NGOs and student activists – and the real hard work on the ground to poorly funded and frequently victimised Bangladeshi unions.

It’s time the labour movement in the imperialist countries which provide the market for these sweatshop products steps up to prevent unscrupulous fashion companies from using super-exploited labour in their supply chains. The TUC must link up retail and distribution workers in the UK with their Bangladeshi sisters to clean up the garment industry once and for all: level up labour rights around the globe and ensure rogue firms and their Western buyers pay their workers and suppliers in full. If they don’t, they should be nationalised and placed under workers’ control – without compensation but maybe with a prison term for the bosses responsible.