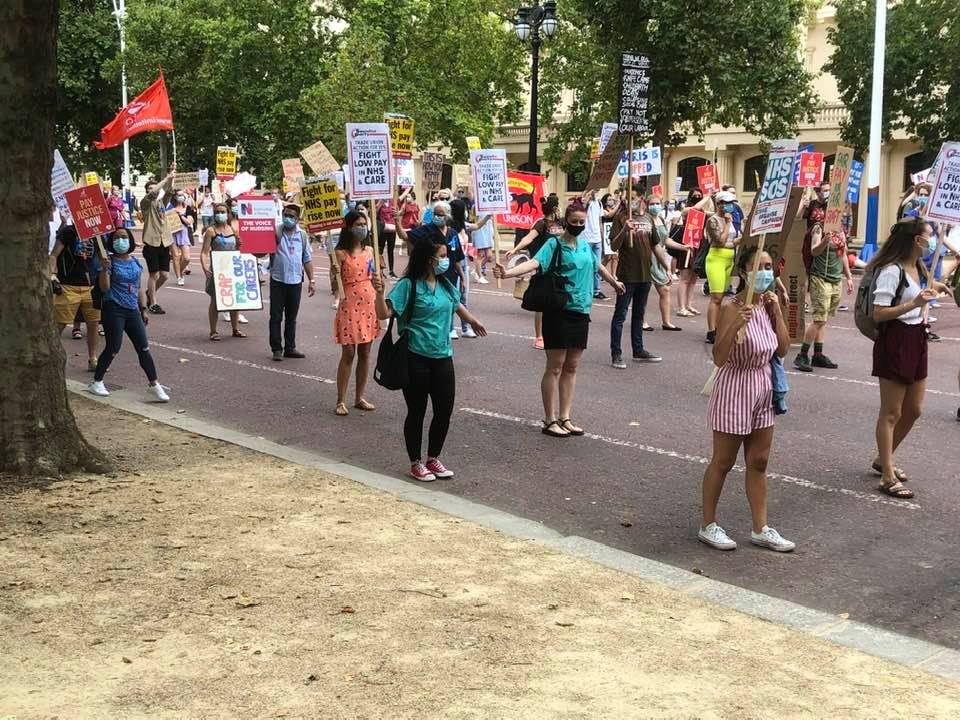 A socialist plan for universal healthcare

THE NHS is no longer the best healthcare system in the world. From its transformative, if flawed, beginnings, through decades of cuts and privatisation the NHS has slipped from the top spot down to 9th in an international comparison of healthcare outcomes, which includes early deaths, cancer survival and infant mortality.

The pandemic has exposed that the NHS is not so much at breaking point, but beyond it. From the lack of ventilators and beds to staff vacancies and low pay, the NHS is unfit to handle this pandemic, the next pandemic or the wider challenges facing a 21st century health service.

As medical science improves and people live longer it is right for society to spend more of the surplus product on healthcare but the percentage of GDP spent on the NHS has fallen in recent years, having peaked in 2010. When UK spending on healthcare is compared to that of other wealthy countries, it is clear the NHS is run on a shoestring budget with spending outstripped by Germany, Canada and Japan.

Diseases of old age, poor mental health, obesity, climate change-related health problems, new viruses and pandemics can be foreseen and prepared for by a well funded, planned and managed health service. This challenge is not simply a national one but an international one and encompasses research, education and pharmaceuticals as well as frontline treatment.

Far from being prepared to meet these challenges, the NHS has been so severely savaged that the pandemic has left a record 5.45 million people waiting for surgery. Those awaiting tests and treatment include those with life-threatening conditions, some of whom will not survive the wait. Of these,some can afford private care, but many more cannot. The inadequate funding, long waiting lists and consequent boost to the private sector further undermines the NHS and it is not hard to see the threat of a US-style private system looming.

The National Health Service was founded by Clement Atlee’s Labour government in 1948 on the principle of providing good healthcare for all, free at the point of delivery regardless of wealth. The capitalist class offered little by way of resistance to this huge gain due to a radicalised working class having suffered the privations of a world war and determined not to accept the hardship caused by a private healthcare system.

But ever since, the NHS has been under attack by Labour and Tory governments alike. For the capitalist class the NHS was always going to be a drain on their profits via the taxes raised to pay for it. Alongside the long history of NHS privatisation, successive governments have made deep cuts to its budget.

To understand why both the Tories and Labour constantly undermine the NHS and why it is unfit to meet the challenges of today, it is necessary to outline the priorities of the capitalist system that they defend.

While capitalism does need a health service of sorts that can sustain a reasonably healthy workforce, this must not be allowed to interfere with the accumulation of profits. Capitalism has an inbuilt tendency to go into crisis when overproduction and decreasing profits lead to inflation and unemployment. This in turn puts pressure on governments to cut social welfare services and reduce taxation on the capitalists. Wealth is redistributed away from workers.

This clearly explains why the Tories, as an out and out capitalist party, feel quite comfortable in their attacks on the NHS. But Labour is meant to be the party of working people and the founder of the NHS. It is often elected on promises to reform the system. Even these minor reforms go out the window when profits are low. That’s why the system as a whole has to be challenged. But Labour remains committed to a ‘mixed’ economy, which means siding with the capitalists and opening up the NHS to the market.

Socialists will always defend the NHS and any gains made by workers, but the NHS was never a truly socialist measure. It was obviously an inroad into the ideals of free market capitalism and a defence of a workers’ right to a ‘social wage’. However, it was seriously compromised from birth and always coexisted with private healthcare. It operated in a system dominated by the priorities of capitalist profit and it was only ever a matter of time before it was corroded.

A ‘socialist measure’ cannot live in isolation from the need to irreversibly shift the balance of power and wealth from the rich to the poor in society as a whole. In reality, this capitalist nationalisation is not socially owned but the property of the capitalist state. This is a world apart from working class expropriation where the bosses are dispossessed for good and without compensation.

For the NHS this would mean completely abolishing the private sector, completely removing the profit prerogative and expropriating the drugs and supply mega-corporations. Absolutely central to this ‘nationalisation’ process is that it is under the control of the workers and working class communities that it belongs to. This particular expropriation must be linked with a democratic plan to expropriate the capitalist class as a whole.

Only a workers’ state can deliver such a plan, a state which is under the control of, and defended by workers’ councils. The realisation of this on an international scale where the world’s resources are allocated rationally and according to the will of the people can produce an economic system based on human need and not capitalist greed.

For example the USA is already vaccinating its population for a third time and western Europe will soon follow, while less than 2% of Africans and South Asians have received their first jab. This prolongs the global pandemic and increases the likelihood of new, vaccine resistant and more deadly strains appearing. It is both immoral and bad science.

We need to plan healthcare internationally, from research to vaccine production and distribution. The threat of future pandemics, climate change and antimicrobial resistance reinforces the need for the globalisation of health systems free from the private sector and its patents.

The great advantage of the NHS over other health services in the beginning, as has been outlined by Dr Allyson Pollock and other activists, was threefold. It enjoyed economies of scale; its funding was secure; and it was a national service that could plan across departments and regions. These advantages have been eroded over time and the service has now fallen in international rankings. But even at its height, the NHS suffered from bureaucratic mismanagement, concessions to the private sector and the exclusion of vital industries like dentistry, pharmaceuticals and social care.

Its future depends on reversing the cuts and privatisations, nationalising the remaining sectors without compensation and placing the whole edifice under the control of health workers and the users of the service. It would also open the door to an international health service, in which the best scientists and medical practitioners can so-operate in keeping the world as safe and healthy as possible.

This would make the struggles over vaccine patents and vaccine hesitancy a thing of the past. If society as a whole owns and controls the NHS, then it can truly become a socialised health service that all can trust because all have a direct stake in its running and its decisions. It would also provide the basis to develop the idea of well-being from a human resource catchphrase into a realistic goal for all.

But this cannot be achieved without a class struggle, bringing the strength of the whole of the working class, not just of health workers to bear down on the profiteers and bureaucrats who have sold our NHS and our well-being down the river.