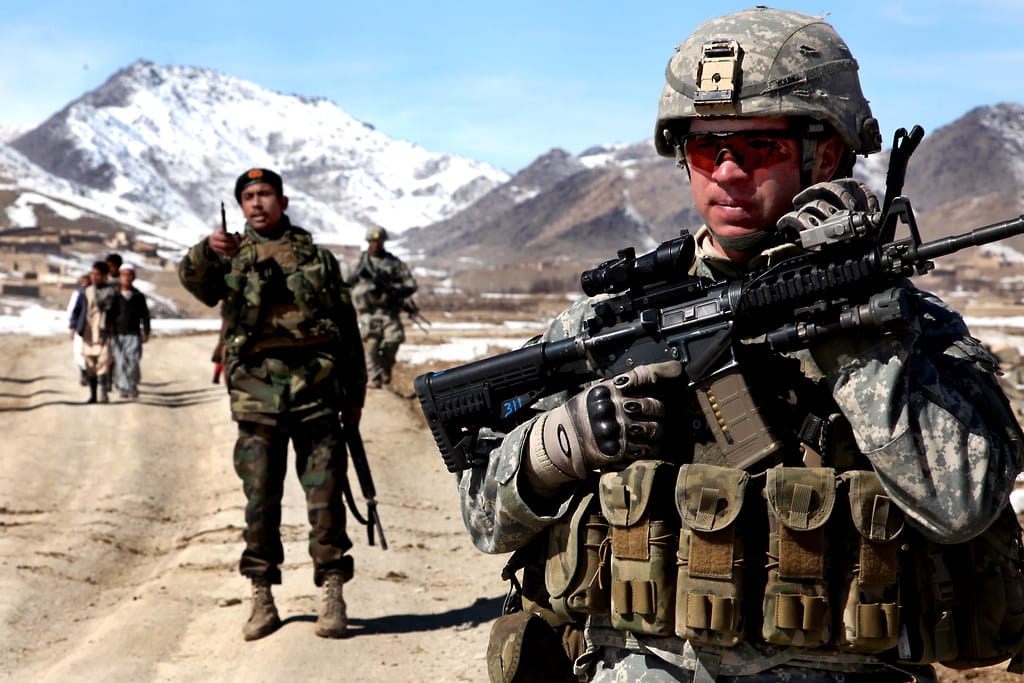 Just short of the twentieth anniversary of George W Bush’s declaration of his War on Terrorism, Joe Biden announced the final exit of the remaining 2500 US troops from Afghanistan. US forces abandoned Bagram, the huge, fortified air base, without even notifying the Afghan government forces and as a result the looters moved in. Biden has proved more precipitate and unconditional in his retreat than either Obama or Trump, both of whom were eager to get out of the Afghan quagmire.

If anything rivals the destructiveness of US “humanitarian” invasions and occupations, it is the aftermath of their withdrawal. The Taliban, the target of Bush and Blair’s supposed war of liberation, are now rolling up the forces of the corrupt and incompetent regime.

Biden, with breathtaking cynicism, delivered the final judgment on America’s longest war: “We don’t do nation building.” Indeed! After the results of invading Afghanistan and Iraq, and bombing Libya and Syria, you can say that again, Mr President.

Today, even if “boots on the ground” has become too expensive and counterproductive, Biden is unlikely to stop bombing and drone strikes launched from the major US bases on the Arabian peninsula or the 5th Fleet in the Gulf, whenever he judges there is a “real and present danger” to the strategic and economic interests of the class he represents. Indeed, the new cold war with China and Russia, already in its opening stages, makes this a certainty.

For now, however, it is plain that the Americans have given up their war against the Taliban for lost. Although another ceasefire agreement has just been agreed in Doha, even if it holds and is converted into a full peace agreement, and that is a big IF, it will be on the Taliban’s terms. An array of world and regional powers are seeking to influence any settlement, and none of them will prove any more humanitarian or liberatory than the departing “democratic imperialisms”.

Since May 1, the Taliban have doubled the number of districts they control, taking over vital customs posts like Spin Baldak on the Pakistan border, through which billions of dollars’ worth of heroin passes towards the port city of Karachi, contributing mightily to the Taliban’s war chest. Near Herat, they have also seized the Islam Qara crossing and in northern Afghanistan they are virtually laying siege to the country’s sixth largest city, Kunduz.

In short, despite US-Nato victories in Afghanistan 2001 and Iraq in 2003, despite the later destruction of the ISIS “caliphate” in northern Iraq and Syria, and the killing of Osama Bin Laden in his Abbotabad hideout, the War on Terrorism has been a gigantic, albeit destructive, failure. It has devastated the cities and infrastructure of these countries and driven millions abroad or internally displaced them to squalid camps.

As for “international terrorism”, in recent years jihadi groups like Boko Haram have spread across the states of sub-Saharan Africa. Local franchises of al-Qaeda, ISIS and other groups continue to wage guerrilla warfare and launch terrorist attacks on a regular basis, and to inspire “lone wolf” attacks in Europe.

The number of lives lost or ruined is high. Since 2001, more than 775,000 American service personnel have been deployed in Afghanistan, many on repeated turns of duty. Many have come home mentally scarred and brutalised. 2,300 were killed in action and 20,589 seriously wounded, (US Defense Department figures). This has cost the country $2.26 trillion.

Of course, Afghan fatalities have been even higher. Deaths of government forces run at over 70,000 and those of the Taliban are estimated to be 51,000. Even more are the losses of civilian lives. More than 71,000 have died during the conflict in the Afghan-Pakistan war zone.

The highpoint of US and Nato engagement was between 2010 and 2012 under Obama, who was elected with a promise to end the war but then launched a “surge”, incredibly named Operation Enduring Freedom, accompanied by massive drone bombing in both Afghanistan and Pakistan, with high civilian casualties. This, like Bush’s efforts, failed to quell the Taliban, in part because they had the not so secret support of elements of the Pakistan security forces.

Under Obama, Trump and Biden, these fruitless expenditures, human and material, plainly convinced the permanent US military and political elite that involvement in Afghanistan was futile, and no longer of great geostrategic significance as compared with their growing obsession with China.

Here, they might need to be wary; Afghanistan could be an important link in Xi Jinping’s Belt and Road project. The Chinese have long been negotiating on this with both the Afghan government and the Taliban. It would be an extension of the $62bn China-Pakistan Economic Corridor, CPEC. Although the continued oppression of the Uyghurs could prove an obstacle, China is already a player in the latest avatar of the Great Game.

Pakistan’s Inter Service Intelligence agency, ISI, is widely credited with creating not only the Mujahidin, who fought the Soviets in Afghanistan, but also the Taliban. Ever since, it has intervened behind the scenes at critical conjunctures. Now, it sees Afghanistan as providing strategic depth against its great rival, India.

Even if the negotiations in Doha mean that the Taliban do not capture the main cities – Kabul, Kandahar, Heart, Mazar al Sharif, Kunduz, Jalalabad – the future of the urban population, women and national and religious minorities, will be bleak and the numbers of refugees will undoubtedly rise.

It is plain that, although “Western” backed governments have re-opened and expanded education for women, and women’s liberation movements, students’ and workers’ organisations have developed, once again, as in previous periods of Afghan modernisation, all this rested on foreign domination and could not strike roots in the majority of the population. Without transforming rural life, and bringing a direct democracy for all who labour, in the homes, fields and factories, all such progress remains vulnerable to a social and political regression. Revolution from above always rests on the weakest of foundations.

For centuries, the intervening powers; the British Raj, the Soviet Union, the United States and tomorrow, perhaps, China, came for their own geostrategic reasons (the “Great Game”) not out of any sort of selfless promotion of modernisation, democracy or women’s liberation. It is only when the country’s intelligentsia, workers and rural poor take control of their fate with a revolutionary party that the cycle of externally imposed corrupt regimes, reactionary terrorist insurgencies and tribal warlords, can be broken.

Meanwhile, progressive forces can expect greater repression under whatever comes out of any Doha “peace settlement”. Afghanistan does have a significant leftist tradition, albeit one dominated by Stalinism in its Soviet or Maoist versions with their stageist theory and perspective of socialism in one country. Their supporters were dragged into the Soviet late cold war intervention/withdrawal.

There are, however, signs that small sections of the left tradition have been rethinking the issues of programme and examining Trotsky and the theory of permanent revolution and the tactics which express it. They certainly deserve all possible ideological, material and moral support to survive the testing period of illegality that lies ahead.

In the countries that inflicted the long war on Afghanistan, first and foremost the NATO imperialist states, the international workers’ movement must press for the admittance of any new surge of refugees and their provision with jobs and homes. Already, many Afghans have been subjected to the harsh welcome of Fortress Europe in the Mediterranean and Trump’s bans. In Pakistan, progressive forces face much the same (in certain cases exactly the same) problems and will understand well how to extend solidarity.

Last, but not least, the left in the imperialist states need to keep the closest eye on “our own imperialisms” which are gearing up for a full-blown conflict with the “new” imperialisms and their regional allies. At its peak, the anti-war movement in 2001-2003 mobilised millions on the streets around the world against the Nato invasion and occupations, but its reformist leaders held back the workers’ movement from mass direct action to stop the war and thus shared responsibility for the horrors of the last 20 years. In a direct clash between imperialisms these horrors will come home.

Here we should recall the words Marx wrote for the Inaugural Address of the First International back in 1864 that are no less relevant today: “If the emancipation of the working classes requires their fraternal concurrence, how are they to fulfil that great mission with a foreign policy in pursuit of criminal designs, playing upon national prejudices, and squandering in piratical wars the people’s blood and treasure?”

He added that working class opposition to the “slaveholders’ rebellion in the US Civil War, and Russia’s oppression in Poland and the Caucasus, … have taught the working classes the duty to master themselves the mysteries of international politics; to watch the diplomatic acts of their respective governments; to counteract them, if necessary, by all means in their power; when unable to prevent, to combine in simultaneous denunciations”.

In a period of sharpening rivalry between imperialist and regional powers, clashes in “faraway places” may seem to be of no obvious concern to the labour movements of the older imperialist powers, except perhaps when floods of refugees approach their borders. In fact, they affect the vital interests of the international working class. The hasty withdrawal of the Western Powers will be accompanied by attempts to erase their responsibility for the new atrocities that a civil war and Taliban restoration will inflict.

Besides, many of the older imperialisms already have substantial communities of workers and refugees, drawn from countries which their rulers once invaded or occupied and who could play an important role in building an international labour movement in solidarity with progressive forces in their homelands. In short, they can be an important part of a new, a fifth, International; one that can help prevent the workers of the imperialist countries, too, being dragged into further wars of unimaginable destruction.