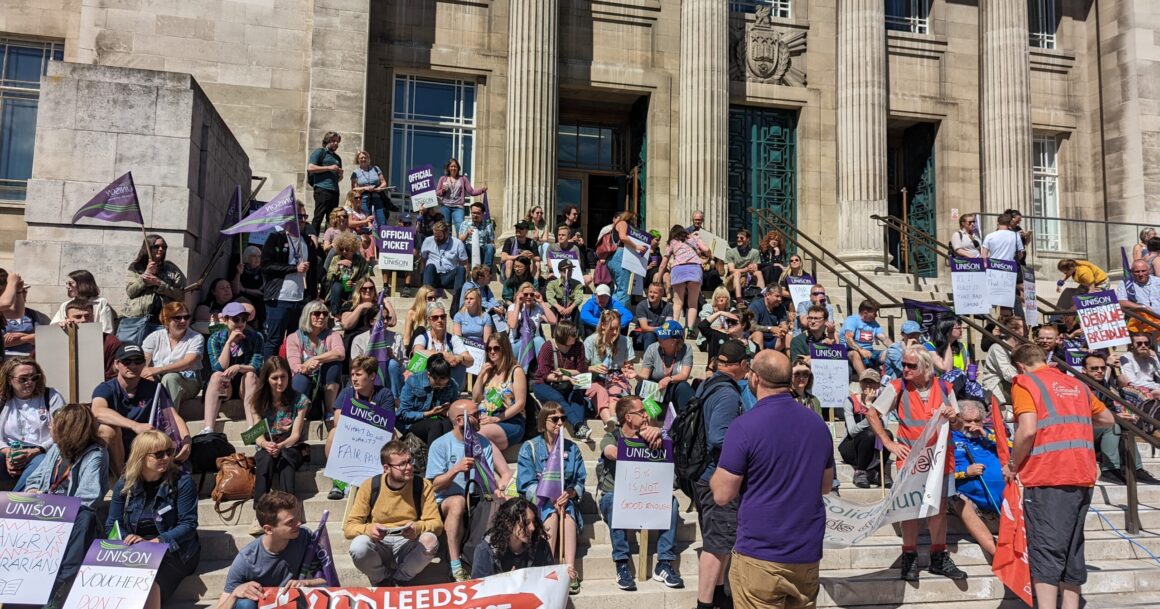 Seventy thousand lecturers and other academic staff, organised by the University and College Union (UCU), took strike action at 150 universities on 24, 25 and 30 November. On the third day of action, thousands marched in central London and other major cities.

The UCU strike involves two inter-related disputes on pay and working conditions, as well as savage cuts to the USS pension scheme. At some universities, Unison members joined UCU members on the picket line.

University support staff in Unison, many of them among the lowest paid in the sector, are taking industrial action at 19 higher education institutions over substantial real-term pay cuts.

In the pay and working conditions dispute, the UCU is demanding a meaningful pay rise to deal with the cost of living crisis. Academic staff are facing a 10% real term cut this year on top of a 25% pay cut since 2009. Workloads remain excessive, while a third of academic staff are on some form of temporary contract.

In the pension dispute, the UCU is demanding university bosses revoke the cuts implemented in April that reduce the guaranteed retirement income of a typical member by 35%. Data from the USS June financial monitoring report dispelled employers’ concerns over a ‘deficit’, showing that restoring benefits would leave the scheme with a £0.6bn surplus.

While university staff struggle to make ends meet, the UK university sector generated a record income of £41.1bn last year. Between them, the 150 vice-chancellors earned an estimated £45 million.

The growth of managerialist university governance has seen a proliferation of managerial roles that David Graeber described as ‘bullshit jobs’. Meanwhile, a growing number of part-time academic staff are on fixed-term, hourly paid, and zero hours contracts.

The current wave of strikes follows the staggered industrial action that took place during 2021–22. During that dispute, the general secretary Jo Grady sent a document to members in April arguing to delay further action for a year. This crisis of confidence undermined the dispute and marginalised the 20 branches that launched a marking boycott.

Encouraged by the leadership’s retreat, employers at several universities withheld 100% of wages for staff participating in the marking boycott, despite them being willing to carry out the majority of their duties. Jo Grady narrowly survived a censure vote at UCU congress over her mismanagement of the dispute.

Two key lessons need to be drawn from the 2021–22 dispute. Firstly, escalating strike action beyond symbolic strikes lasting a few days is key to winning this dispute. Without escalation up to indefinite action, universities can reschedule lectures and threaten staff who refuse with docked pay.

Secondly, the leadership’s promotion of a demobilisation strategy during the 2021-22 dispute underlines the necessity of rank and file control of the strikes. UCU activists should build strike committees in every university, and elect a recallable national strike committee to keep the dispute on track and guard against capitulation.

Members need to know what the next steps are following the action on 30 November. Jo Grady has promised to deliver strike action in semester two ‘on a scale we haven’t done before’, but that will require an escalation that has not been seen previously. If university employers do not budge following the November strikes, activists need to put pressure on the leadership to call for indefinite strike action and shut down campuses in the second term.

This means building staff-student solidarity on our campuses, planning coordinated action with the other unions, and members taking democratic control of the dispute.