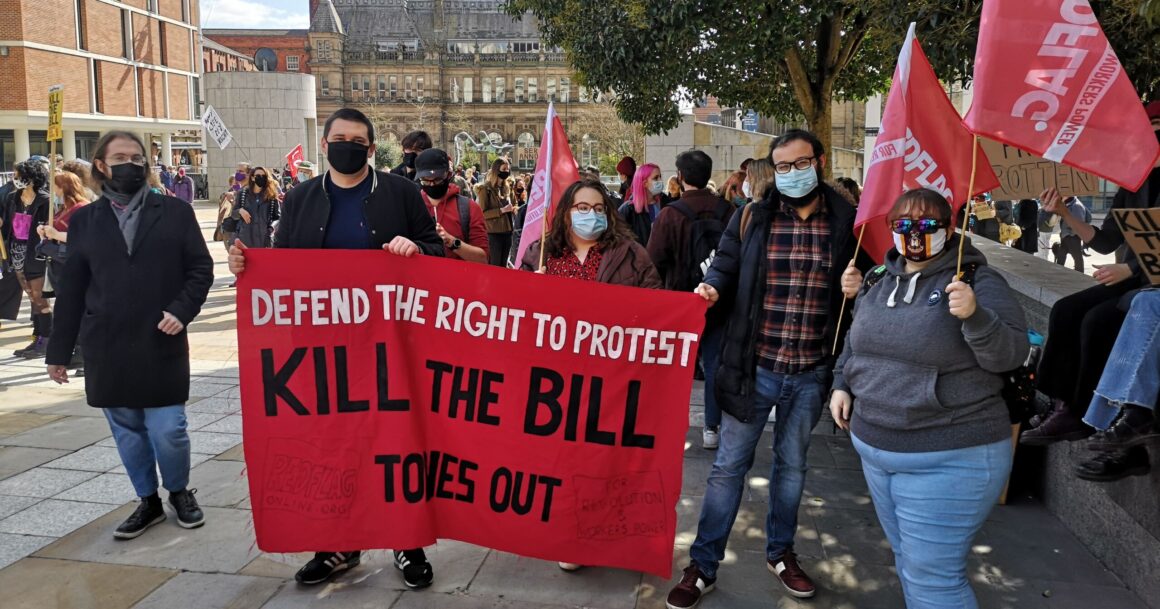 The new Public Order Bill threatens to further restrict and criminalise the democratic right to protest. The Bill has passed the House of Commons, and now only a vote in the unelected House of Lords stands in the way of it becoming law.

The Bill is in large part a rehash of provisions previously contained in the Police, Crime, Sentencing and Courts Act (PCSCA)­—provisions that were rejected by the Lords on the basis that they were not debated in the Commons at all during its passage through Parliament.

The government claims that the Bill contains ‘sensible and proportionate measures’ which will ‘allow the police to better balance the rights of protestors and the public’ and that by reintroducing the measures in a bespoke Bill they are simply ‘allowing the elected house to scrutinise and vote on the government’s proposals’.

Despite passing the House of Commons, the Bill has been widely criticised by MPs from across the House, from Jeremy Corbyn to Caroline Lucas to Tory MP Charles Walker. Amnesty International say the Bill would ‘leave the UK in breach of international human rights law,’ and allow the government ‘to pick and choose which protests it does and doesn’t approve of and seek sweeping banning orders, backed up by the prospect of hefty prison sentences, to stop them’.

The effect of the Bill could be extremely wide ranging, creating several new protest related offences and handing enlarged powers to the police to disrupt peaceful protests and harass minorities.

In particular, the Bill will create a new offence of ‘locking-on’ and ‘going equipped to lock-on’, intended to criminalise the protest tactics used by Extinction Rebellion and Just Stop Oil. New offences of ‘obstructing major transport works’ and ‘causing serious disruption by tunnelling’ are also introduced, aimed mainly at the tactics of those protesting government projects such as HS2 and the construction of new highways.

A further offence of ‘interference with key national infrastructure’ is directed against ‘any behaviour which prevents or significantly delays the operation of key infrastructure’, which will be defined widely to include facilities such as railways, airports, printing presses, and oil and gas infrastructure. Not only could these provisions be used against environmental protestors, they could potentially be used to criminalise actions taken by striking workers.

In order to enforce these new offences, the government has unveiled new police powers, extending stop and search powers to search for and seize objects that may be used in a protest related offence. Such powers are disproportionately used to target black people and other ethnic minorities; even according to the government’s own data, a black person is over 7 times more likely to be subjected to stop and search than a white person.

The Bill will also give lower level police officials in London the ability to attach conditions to upcoming protests, grant new powers to the British Transport Police and Ministry of Defence Police to place noise related restrictions on protests, and enable a Secretary of State to apply for an injunction to prevent a protest completely if it is judged to be against the public interest.

Perhaps most worrying of all is the government’s plan to introduce ‘Serious Disruption Prevention Orders’ (SDPOs), which would allow the court to place prohibitions and restrictions on protestors who haven’t been convicted of any crime simply for carrying out, causing or contributing to another person carrying out, ‘protest related activities which have, or could have, resulted in serious disruption’.

SDPOs could be used to restrict where someone can go, who they can associate with, the items they can have in their possession, and their internet activity. The court can also order a person subject to an SDPO to wear an electronic ankle tag.

Breaching an SDPO will be a criminal offence, carrying a maximum sentence of six months’ imprisonment and/or an unlimited fine. SDPOs can be imposed retrospectively in respect of any ‘convictions or behaviour’ which took place in the last 5 years.

News coverage has portrayed the Bill as an attempt to clamp down on ‘unpopular’ environmental protests, but in reality its powers are wide-ranging and could be used against striking workers, peaceful protests around the cost of living, anti-racist demonstrations or any other protests or tactics the government dislikes.

Building on the PCSCA, and in tandem with the government’s proposed anti-union laws, the Public Order Bill is a major attack that would effectively outlaw effective protest.

We can’t rely on the House of Lords to vote against these provisions. Likewise, we can’t rely on a Labour government to repeal them—Starmer’s stance towards striking workers shows whose side he’s on. We need to demand Labour gets off the fence and pledges to repeal the Public Order and Police legislation as well as the anti-union laws.

Our response must be to build a workers’ united front in defence of our democratic right to protest, uniting the union, socialist and environmental activists and the movements of the oppressed. We must resist these new restrictions and make them unworkable in practice, by ensuring our demonstrations and picket lines are properly defended from state harassment with democratically-controlled stewards’ organisations.