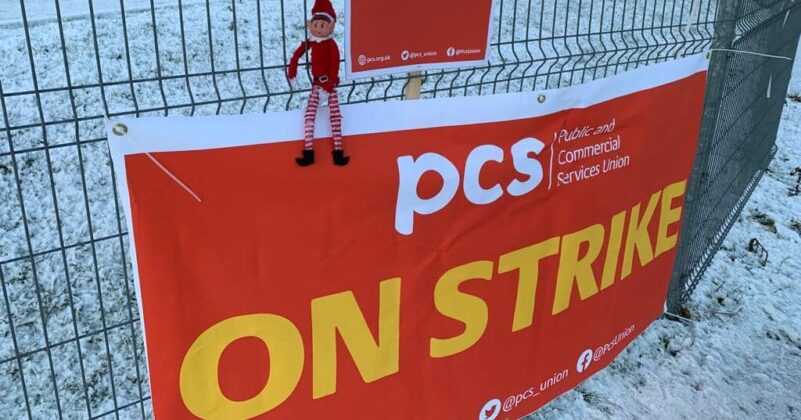 PCS: Targeted strikes are not enough

By a PCS rep

The Public and Commercial Services Union (PCS), the largest of the civil service unions, is taking selective industrial action in December, demanding a 10% pay rise, a reduction in pension contributions, and opposing cuts to jobs and redundancy terms.

After months of leafleting, membership meetings, telephone calls and direct messages, union activists in 124 departments and other public bodies surpassed the 50% minimum turnout threshold imposed by the anti-union laws, and now have a legal mandate to take industrial action. Over 100,000 civil servants voted ‘yes’.

PCS has separately balloted legal advisers and court associates (unqualified legal advisers) in over 80 Magistrates Courts in protest against the failing ‘common platform’ system. Members will strike for most of December and new dates have been announced for 24 December to 4 January. Of the latest tranche of members to be balloted in this dispute, 97% voted for strike action – smashing the 50% threshold.

Though the total turnout across those balloted exceeded the turnout threshold, the ballot was disaggregated, meaning that each department was balloted as a separate entity. This guarded against the possibility that an aggregate turnout below 50% would prevent anyone from striking, but on the flip side it means that those departments that failed to pass the threshold cannot legally take action.

Of those who fell short, the most significant is HMRC, one of the two largest departments. HMRC achieved 47% and will be re-balloted alongside five other departments who narrowly missed out. Most of these ballots, including HMRC’s, will end on 27 February.

The National Executive Committee (NEC) met on 18 November, after the announcement of the ballot result, to decide what action to call. It agreed an initial programme of targeted action but voted down motions calling for all-member strikes in December. General Secretary Mark Serwotka wrote to members to say:

‘The NEC will meet again in mid-December to consider the next wave of strikes… This could include strike action by all members together in the areas that crossed the 50% turnout threshold, possibly coordinated with other unions.’

This would at best put the first possible date for an all-out, across the board strike back to January, two months after members voted for action. If the leadership waits until the HRMC vote is in, then it could be mid-March – an unbelievable delay in the winter months of an acute cost of living crisis.

The aim of the targeted action is to maximise the impact of the strike by bringing out those workers whose absence will cause the most disruption. The departments taking selective action are the Rural Payments Agency (13-23 December and 3-13 January), Driver and Vehicle Standards Agency, where the agency is being split into four geographic areas, which will strike on different days between 13 December and 10 January. Likewise, National Highways workers will strike in geographical groups on days between 16 December and 7 January.

In other words—during December, as the train, post, and hospital workers all take industrial action, only small groups of civil service workers will be standing alongside them. To date, no all-member strikes have yet been announced, raising concerns across the union that the momentum built up during the ballot could be lost if the majority of members wait for months to be called out on strike.

Some of the PCS Young Members Network put forward a motion calling on the NEC to call all 124 departments out on strike, but it was relegated to a discussion paper and then voted down. Numerous branches passed a model motion making the same demands, arguing that not only will momentum be lost, but those taking targeted action cannot be expected to carry the whole strike.

The motion calls on the NEC to announce all-out action for no later than mid-January. Certainly, the NEC should not wait until 27 February to see whether HMRC pass the turnout threshold in their ballot.

Other unions are taking action now, and more, including teachers and firefighters, are balloting. But whether or not other unions call action for January, the PCS must. Coordination is more powerful than going out alone. The bosses’ paper Financial Times estimated that just a two-day strike by all those unions with a mandate in December would knock 0.3% off Britain’s annual GDP.

But in the past the union has opted to do nothing rather than strike alone, a course of action guaranteed to achieve… nothing. Those members taking part in the targeted action should of course shut down their offices and mount noisy pickets. They should send delegations to the pickets of other departments and start to make rank and file links.

But they should also use the opportunity of extended strike action to ask a serious question of their leadership’s strategy: when will the strikes be escalated to an all-out, indefinite strike, capable of winning the union’s demands?