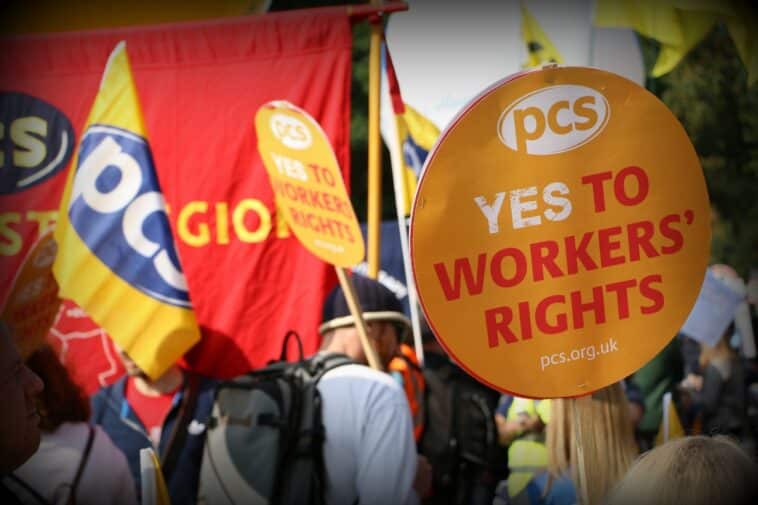 PCS strike ballot: what kind of action do we need?

THE PUBLIC and Commercial Services union (PCS) began a strike ballot of civil servants on 26 September. The ballot covers pay, pensions and job cuts and redundancy terms and will run until 7 November.

The government has offered pay rises of up to 3%, though most workers will only get 2%. Inflation (RPI) stands at 12.3% so the proposed pay rise will effectively be another pay cut in a sector where pay has been frozen or capped for more than a decade.

On top of this, the government is planning to axe 91,000 jobs, with each department to suffer cuts of 20-40%, and wants to worsen redundancy terms to make these job cuts cheaper. One in five jobs are to go, and while some cuts will be achieved by terminating temporary contracts or deleting vacancies, these are still job cuts that will devastate families during the crisis. Those who remain at work will doubtless be expected to do 20% more work for no extra money. If you think backlogs at the Passport Offices, Job Centres and DVLA are bad now, worse is to come.

The government is also forcing staff to make overpayments of hundreds of pounds per year to their pension fund. A civil servant earing £22k per year is overpaying by £36.66 every month. These payments reduce wages but do not increase pensions—the government simply pockets the money.

The union is calling for a 10% pay rise; a Living Wage of at least £15 an hour; an immediate 2% cut in contributions that our members have overpaid to their pensions since 2018; no further cuts to redundancy terms; and a job security agreement, coupled with the resources desperately needed to deliver public services.

PCS has not held a national strike since the introduction of anti-union laws in 2016 that forced unions to achieve a 50% turnout in a postal ballot for strikes to be legal. The consultative ballot earlier this year fell just short of the threshold, so branches across the country are working to get the vote out.

While we work towards a “yes” vote, it is worth using the build up to start a discussion about what kind of industrial action is capable of forcing concessions from the government. In the past the PCS has used one-day strikes but these have failed to deliver real gains.

We need to sharply escalate the action from one-day to one-week to all out indefinite strikes. This has produced significant successes in the private sector and can do so in the civil service too. The precondition for this is an active membership, stimulated by a rank and file movement which fights for control of the dispute.

Such a movement could also push for coordinated action with other unions—the train workers, posties and soon, hopefully, university and hospital workers. We can do this by linking up locally to support each others ballots and picket lines and demand that our leaders coordinate our action to amplify its effect.

The tradition of rank and file trade unionism has been absent for far too long in white-collar unions, but can be built with lightning speed in the current period of crisis—so long as socialists intervene to raise workers’ horizons and put forward a fighting strategy for collective discussion and action.