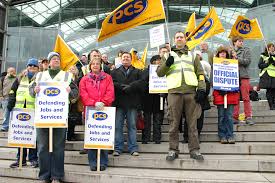 Differences within Left Unity, the ruling faction of the Public and Commercial Services Union (PCS), have prompted the Socialist Party to launch a faction within that faction, the Broad Left Network. At the same time, the PCS Rank and File Network is being launched. This raises the question of how best to organise in the unions – rank and file or broad left?

The Broad Left Network states: “We believe that in order for PCS to successfully represent its members’ interests, it is vital that PCS campaigns on the basis of socialist policies which reflect the class interests of the membership.” Surely no socialist would disagree with these aims. However, broad left and rank and file tactics are not two different routes to this same goal but instead take us to different destinations.

A broad left, whatever its precise policies, is an electoral machine aimed at the winning the positions needed to implement those policies. They leave the union’s bureaucratic structure by-and-large in place. In PCS, the only elected full-time officials are the General Secretary and Assistant General Secretary. The National Disputes Committee maintains tight control over which sections of the workforce are allowed to take industrial action.

A rank and file movement would of course seek to win elections but would primarily be based in the workplace and seek to organise action – with the officials where possible, but without them where necessary. It would fight for strike tactics and strategy to be decided by mass meetings of all the members concerned, and elect delegates who would then lead the dispute and control negotiations.

A rank and file movement would call for all officials to be subject to election, and immediate recall by their electorate, if they do not represent their members’ views. Officials would be paid the average wage of those they represent. Without these measures, unions develop a bureaucracy – a layer of leaders standing above the membership, largely unaccountable to them and acting as masters of the union rather its servants.

As it stands, full-timers function as negotiators with the employer and manage the expectations of the members. In our pensions campaign in 2011 the union leadership called a series of one-day strikes as a leverage tactic for negotiations, rather than the escalating action that was needed to defeat the government.

PCS officers certainly argued with the other union leaders to continue the strike, but they left it at that, refusing to go over the heads of the bureaucrats from Unison, GMB and Unite, and directly appeal to the rank and file of those unions, where their appeal would have been far better received. These bureaucratic conventions, which leave each union leader in charge of her/his fiefdom act as a convenient brake on rank and file initiative and class unity. They should be broken.

The PCS Rank and File Network began in HMRC earlier this year but is spreading to other departments. It is holding a launch event this month to discuss what a rank and file movement is and how one can be built in our union. The network describes its aims as:

“We stand for a union which:

Rank and File Network is launching at a difficult time, but its demands offer the possibility of organising the most militant workers to meet the challenges ahead and transforming the union. PCS is reeling from two failed ballots, struggling to organise on the ground to achieve the voter turnout demanded by the anti-union laws.

Both Broad Left Network and Left Unity argue that the task is to rebuild the base of the union so we can call industrial action, and the question of who controls those strikes is trying to run before we can walk. But the broad left approach to rebuilding the union is not working.

A rank and file organisation should argue for the union to re-ballot the best organised sections that are confident of meeting the 50% threshold, and for those strikes to be run by the members taking action. This can spur activists in other sections on to improve their workplace organisation and join the battle as soon as they are ready.

More immediately, we are facing a No Deal Brexit that threatens the jobs of colleagues without British citizenship, everyone’s rights at work and the public services we deliver. The political and industrial action needed to force out the Johnson government will certainly destabilise British capitalism. It will pose the questions: who is to rule in society? and what is society’s wealth to be used for?