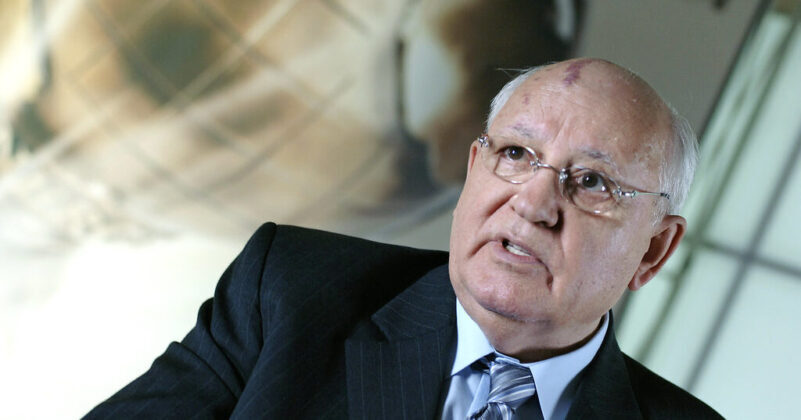 In death, as in life, the role and significance of Mikhail Gorbachev, who died on August 30 and was buried on September 3, remains disputed.

Lauded in the West as the man who championed democracy against Stalinism, he is remembered in the “East” for policies that resulted in economic collapse and misery for millions.

By 1985, when he took office, the Soviet economy was close to stagnation. The system of top-down bureaucratic planning had succeeded in rebuilding after the Second World War, but was incapable of further development or innovation. Worse still, the war in Afghanistan was draining resources at the very time when the USA, under Ronald Reagan, was forcing an arms race.

Summing up the situation after Gorbachev had announced his reform programme, Workers Power wrote in February 1987:

‘Groomed by the KGB chief and the butcher of Budapest, Yuri Andropov, Gorbachev came to power at the head of a section of the Kremlin hierarchy that was mindful of the crises that faced the bureaucracy’s rule at the end of the Brezhnev period. The Soviet economy was proving less and less able to match the growth rates it could notch up at a more primitive stage of industrial development.

‘They want to tighten the grip of the central apparatus over its bureaucratic underlings. They want to refine the mechanisms for doing so and to achieve Stalin’s effects without the bloodshed. They want to make the bureaucracy work. At the same time, they want to encourage the market mechanism without destroying the cohesion of bureaucratic rule. The attempt to marry these contradictory objectives reflects the historic paralysis of the Kremlin bureaucracy.’

That proved to be an accurate assessment. So, too, was the conclusion that, while Gorbachev was not trying to restore capitalism, his policies would, ‘considerably strengthen the social base of those who would consciously struggle for such a goal.’

Central as the factions within the ruling party obviously were, they were not the only potentially decisive force that was preparing for battle. Encouraged by Gorbachev’s calls for ‘Glasnost’ and ‘Perestroika’ — ‘openness’ and ‘restructuring’—independent workers’ clubs were being formed across the Soviet Union.

In July 1989, representatives from seventy of them met in Moscow to set up an information centre. At the same time, a miners’ strike in the Siberian Kuzbas coalfield rapidly spread to the Donbas in Ukraine, Vorkuta in the Arctic north and Karaganda in Kazakhstan. Suddenly, the bureaucracy was facing the prospect of a radical challenge to all of the factions.

Gorbachev’s priority became holding the central authority together: he gave himself power to ban strikes and declare states of emergency, and sent troops into Baku, Tbilisi and Moldova to combat separatism. This drive, however, was tempered by witnessing the Tiananmen massacre in China in June 1989 and the nationwide repression thereafter—if it came to such a confrontation in the USSR, would the regime even survive? It is, perhaps, to Gorbachev’s credit that he avoided posing that question.

What was certain was that Moscow could not send its forces into Eastern European countries to suppress anti-Soviet movements, as it had in 1968 in Czechoslovakia. Gorbachev travelled to Berlin, but only to tell Eric Honecker he would get no backing from the Red Army. Within weeks, the Berlin Wall had been breached and Germany was on the way to reunification.

Meanwhile, elections to a new ‘Congress of People’s Deputies’, in which the Communist Party of the Soviet Union (CPSU) was only guaranteed one-third of the seats, provided a national platform for a handful of ‘reformists’, led by Boris Yeltsin, from which to call for further changes. This led to an acceleration of both political and economic disintegration.

The end finally came in August 1991, when the ‘hardliners’ launched an attempted coup, arresting Gorbachev while he was on holiday on the Black Sea. The ‘reformers’, led by Yeltsin, mobilised against them – the coup failed and Gorbachev was brought back to Moscow by the now triumphant Yeltsin.

Republic after republic seceded from the Soviet Union during the autumn; the Commonwealth of Independent States was declared by the leaders of Russia, Ukraine and Belarus on December 8; and the Soviet Union was officially dissolved on December 26, the day after Gorbachev resigned and handed over his responsibilities to Yeltsin, President of Russia.

Mikhail Gorbachev, then, was certainly a central figure in the collapse of the Soviet Union but, ultimately, he did not drive the forces of change—he was driven by them.