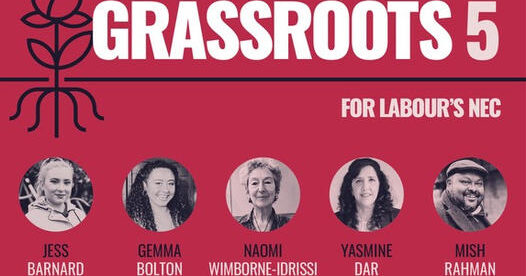 The election of four of the five candidates of the Centre Left Grassroots Alliance to the constituency section of Labour’s National Executive Committee is clear evidence that, despite everything, there is still a considerable left current within the party.

The four successful candidates, Jess Barnard, Gemma Bolton, Yasmine Dar and Naomi Wimborne-Idrissi did not stand on a common platform but shared common themes such as defending party democracy, restoring the whip to Jeremy Corbyn, supporting the unions and action on the Forde report, in their campaigning.

That is already enough to ensure disagreements with the Starmer leadership and the layer of officials who did so much to damage the party after Corbyn was elected leader. As the cost of living crisis unfolds, however, their first priority should be to give a lead to their supporters, urging them to turn their branches and CLPs outwards into active campaigning in support of workers’ interests.

Momentum, often presented as playing a leading role on the left of the party, hit a new low with this election. Having initially supported Naomi Wimborne-Idrissi, the candidate of Jewish Voice for Labour, it then withdrew support on the curious (spurious?) grounds that it did not know her position with regard to Trans self-ID.

Worse still, in its report of the election results, while congratulating the other three Grassroots candidates, Momentum could not bring itself even to report the fact of Naomi’s election.

The real reason there was a surge of grassroots support for Naomi is that she has been a courageous fighter for the Palestinian cause and stood up against the conservative Jewish establishment’s attacks on Jeremy Corbyn.

The Board of Deputies and The Jewish Leadership Council put out a statement following the election that: ‘Ms Wimborne-Idrissi should play no part in the disciplinary functions of the NEC and be kept off any committees relating to equalities or tackling antisemitism.’

The spectacle of supposedly politically neutral Jewish community organisations arguing against a Jewish NEC member being granted equal rights is so absurd that it would be comical, if it wasn’t so tragic.