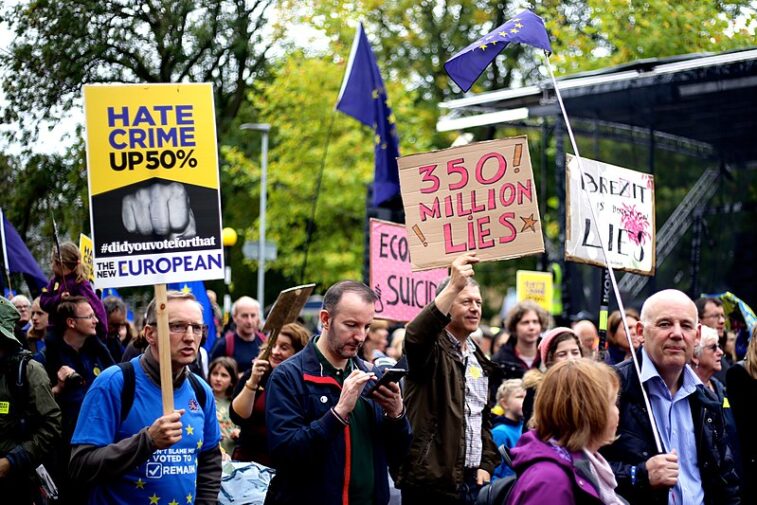 Labour: no responsibility for Johnson’s Brexit!

Boris Johnson’s Brexit deal will be voted on by Parliament this week. With an 80-seat majority, the deal is certain to pass. It has already been unanimously backed by the remaining 27 EU member states.

The campaign to leave the EU, based on the nationalist myth of reclaiming British ‘sovereignty’ was a reactionary swindle from start to finish, with millions of European citizens disenfranchised and immigrants scapegoated.

The primary aim of its sponsors was to escape EU legislation preventing British bosses undercutting their continental rivals by slashing labour, social and environmental protections in the UK.

This deal is only the end of the beginning for the struggle between British capital and its European rivals over what the deal really means. Ahead lie years of wrangling over whole swathes of economic activity and international cooperation not covered by the deal.

But already we know that:

The severing of trading relations and the right to live and work in Europe will increase prices, cost jobs, and erect new barriers to the common action and integration of the European working class. Brexit will intensify the economic dislocation caused by the coronavirus crisis.

The only certainty is that manufacturers and bankers based in Britain will aim to recoup their costs by driving down wages, deepening exploitation and seizing the remaining bits of welfare, health and education that could yield a juicy profit.

In Boris Johnson’s government packed with hardline Brexiteers, they have a willing instrument.

Before the ink was dry on the fine print, Labour leader Keir Starmer criticised the deal – but nevertheless declared “Labour will accept it, and vote for it”.

For four years Keir Starmer claimed to oppose Brexit, all the while serving in Jeremy Corbyn’s shadow cabinet, and manoeuvring with the former leader to ensure Labour did not take a clear position on Brexit.

He claims that “leadership is about taking the tough decisions in the national interest,” adding: “It is about being a serious, responsible opposition. At a moment of such national significance, it is not credible for Labour to be on the sidelines.” Responsibility to who?

In his desperation to demonstrate Labour’s ‘responsibility’ to the British bosses, Starmer wants to drag Labour off the opposition benches to vote for a deal he claims to oppose!

There are three reasons Labour MPs should oppose this deal:

Firstly, the deal and the whole project of a nationalist exit from the EU is an attack on the working class: it means deregulation, attacks on working conditions and living stands, and will fuel racism.

Secondly, even by low standards of Labour opportunism, voting for the deal is counterproductive. Instead of making the party looks ‘responsible’ – it will make it responsible for the consequences of Brexit.

Thirdly, Labour claims to be a party representing the interests of working people. As such it should oppose on principle any government measure which is not in our interests.

Instead of deploying his supposed ‘forensic’ skills to dismantle line by line the anti-working class character of Johnson’s Brexit deal, Starmer is more interested in demonstrating Labour’s allegiance to the ‘national interest’.

But the national interest in a capitalist society is a fraud. The nation is a society of two fundamental classes, workers and bosses, whose interests are irreconcilably opposed. If Labour is not the party of intransigent defence of the interests of workers against the bosses, it becomes in practice a party that defends the interests of the bosses.

Instead of capitulating to the nationalist Brexit project, instead of peddling illusions in the ‘national interest, and instead of disarming Labour, Starmer should make Wednesday’s vote the launchpad of a campaign to expose the reactionary content of Brexit and put forward an alternative programme, based on increasing workers’ rights and wages, increasing environmental protections, and demanding a massive programme of housebuilding and infrastructure renewal, all on a green basis.

Outside parliament Labour’s mass membership and the unions should campaign for these goals, especially in the ‘left behind’ areas, where a minority of working class voters were conned into supporting for Brexit and even the Tories in 2019.

On Wednesday Keir Starmer should instruct Labour MPs to oppose the bill – and if he won’t they should do so anyway, and party members must campaign for a leadership that fights.