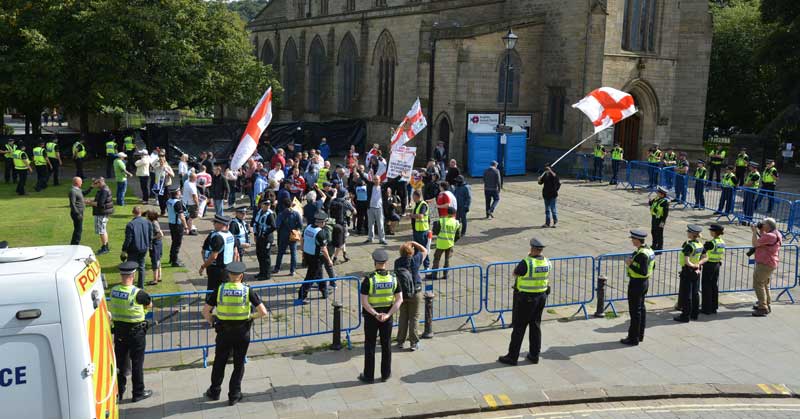 LAST SATURDAY 2 September a group of us travelled to Keighley to counter-protest the English Defence League’s (EDL) national demonstration. Over 300 police had been bussed in including officers from Wales, Durham and Northumbria to protect just 60 EDL members.

The march had originally planned to go to Bradford as well as Keighley, but days before the demo the press reported that the Bradford part of the rally was cancelled. The reason for the cancellation is unknown but could be due to the fact the date of the march coincided with both Eid and a Bradford City home game. This in addition to the increased antifascist activity in response to the murder of comrade Heather Heyer in Charlottesville, means the EDL may have realised taking their fascist message to Bradford would have brought out more opposition than they or the police could handle.

Around midday we arrived at the Unite Against Fascism (UAF) counter-protest at the War Memorial in Keighley town centre where roughly 100 comrades were assembled. However, very quickly the police line around us tightened up and we realised we would be kettled if we stayed much longer.

We walked to Keighley Church Green where the EDL planned to stage their rally. Lines of police surrounded the main demo area, which was empty on our arrival. A crowd had gathered just outside the police line, some were antifascists but most appeared to be locals interested to see what was going on.

When the EDL eventually marched through there was some fighting but the reaction from locals was largely one of bemusement. We saw a shopkeeper walk outside to fasten the mesh barriers on his doors and windows, but once he saw how small the EDL march was he went back inside to continue business as usual.

Ultimately, there were many problems with the main counter-protest organised by Unite Against Fascism. By allowing themselves to be kettled 150 metres away from the EDL they failed to successfully voice an opposition. Instead, they chanted antifascist slogans at locals and even stood blocking the main road through Keighley at one point, which was not conducive to engaging local residents with an antifascist message.

The locals gathered at the Church Green police line, many of them curious teenagers, seemed like they may have been receptive to a coherent antifascist message if one had been presented. Instead, they chatted to the police officers who explained the importance of “freedom of political expression”.

The event could have been an opportunity for those in the labour movement to voice a clear opposition to the EDL. In the absence of this, it seemed like local residents identified more with the friendly officers who kept order, rather than the angry UAF demo that blocked the main road. It is important that we organise through Labour and Momentum branches to emphasise an explicitly socialist and labour movement-oriented opposition to fascism, rather than allowing such activities to be co-opted by SWP fronts with ineffective tactics.