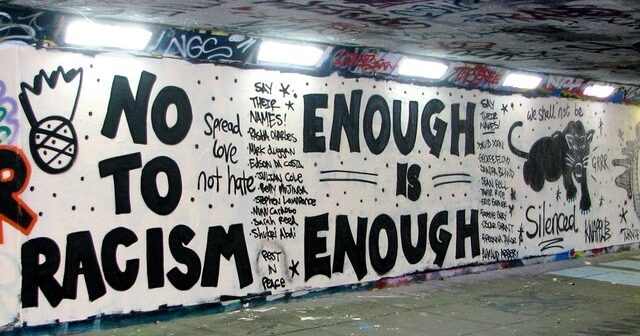 On the day that the students of Pimlico academy fought back against their school’s racist uniform policies and won, the government released its highly controversial report into race in the UK. The report stated that slavery was “not just about profit and suffering” and that education should focus on elements of the “Caribbean experience” that demonstrate how “culturally African people transformed themselves into a remodelled African/Britain”. The report’s essential conclusion is that family structure and social class are more important than race in determining the course of people’s lives. Whilst this may be true, it is missing the point by failing to recognise the interrelationship between class and race.

In the report and coverage surrounding it, the government and establishment media are waging the culture war against the “woke left”. They are saying that any racial disparities are not due to individual acts of discrimination, which is true, but then use that fact as justification for saying that Britain is not an institutionally racist country. This deliberate mis-interpretation of the data undermines the credibility of the whole report.

The Devil in the Detail

Although it does contain some useful data which demonstrates qualitative improvements in the lives of black and south-asian people, the narrative puts the responsibility for changing social factors on individuls, limiting the definition of racism of to direct individual acts of discrimination. Instead, the report makes the case that a lot of the disparity is due to “family life” overt racism, without acknowledging the key role systemic factors play in ensuring that children from BAME communities generally have a worse home environment and educational opportunities than their white counterparts, or the massive disparity in policing.

The commission concluded by saying it could find “no evidence of institutional racism”. But its own findings contradict this. The report heralds a 2.3 per cent pay gap but drill down into the data behind the headline and you find that Pakistani, Bangladeshi and African workers earn 13-16 per cent less than white workers.

Similarly unemployment is twice as high among Bangladeshi, Pakistani and Black workers (8 per cent), compared to white workers (4 per cent), while the former are twice as likely to fall into debt after just one month on the dole. For Black and Asian youth, unemployment is endemic at between 16 and 26 per cent.

One more example of creative data manipulation can be found in the commission’s dealing with the use of stop & search powers. The report tries to minimise the discrimination by effectively excluding London as “exceptional”. At the same time, however, it admits that the Met accounts for 49 per cent of all stops & searches – and that 60 per cent of Black and Asian people live in London. The commission cannot deny the statistic that black men are nine times more likely to be stopped and eighteen times more likely to be stopped without suspicion. Most searches are for possession of small quantities of drugs for personal use; very few find weapons or stolen goods; three-quarters lead to no further action. This adds up to the undeniable conclusion that stop & search is used primarily against young black men in neighbourhoods where there are majority non-white populations as a weapon to put whole communities under siege and criminalise black men and boys.

The commission twists data to fit its preordained conclusions. It ignores recent scandals, like the deportations of Windrush generation immigrants and the Grenfell fire. Its recommendations are paltry and amount to little more than recruiting more black faces to high places.

Whilst class is the fundamental basis of Marxist thought, it is incorrect to simply say that class is more important than race. In truth, class explains race. It is not about pitting race against class, but explaining race through class. Improvements in the lives of black and asian people, while true and measurable results of working class struggle, have not resulted in any structural change to the question of race.

True, some Black and south Asian people may have better qualifications, and jobs than others in their communities, however they are more likely to socialise with and have family and friends in the working class, vote labour and join unions, because their oppression is based on cheap labour. Liberalism may have lessened some aspects of economic and educational oppression for some black and asian people but it cannot abolish it. As nationalist Brexit starts to take root there is a strong feeling that any gains attributable to Liberalism may be quickly lost as the tide turns in favour of reaction.

The intent and primary function of the report is to make an attack on decolonisation, “wokedom” and other bogeymen for reactionaries. The report seeks to revise the narrative of British colonial history, particularly around slavery and imperialism. In doing so, it is at odds with the cultural  movement which is attempting to finally redress systemic racial inequalities and de-colonialise the curriculum. It is an insult to all those who struggle against the racial prejudices deeply woven into the fabric of imperialist Britain.