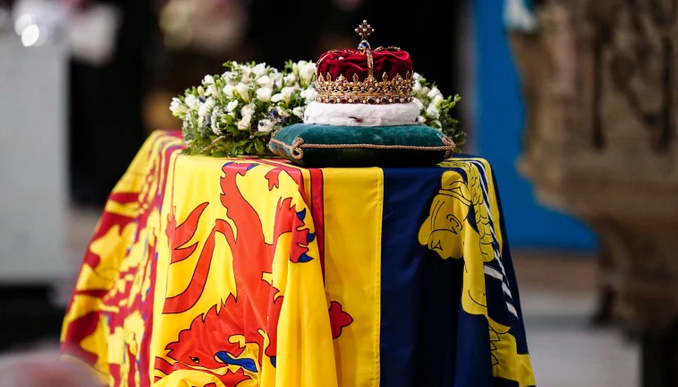 HOUR AFTER hour of obsequious commentary, constant updating on the progress of the coffin towards London, an uninterrupted procession of has-beens and would-be’s underlining their own importance by recalling their past royal encounters—there is no way of avoiding the passing of Elizabeth II.

More importantly, the suspension of strike action by the RMT and by CWU, generally reckoned the most militant of the trades unions and, less surprisingly, the postponement of the Trades Union Congress, underlines the continued influence of the British monarchy.

The constant barrage of royal propaganda creates a mind set in which it seems necessary to suspend normal life, even the struggle for a decent income, out of respect for the dead monarch. The same is true for the crowds laying flowers to express their no doubt genuine feelings that they have lost someone important, even close to them. All this is the product of a carefully constructed and maintained myth: that the monarch stands above politics and represents the common interest of all.

In reality, the Royal Family is an extremely wealthy representative of the landed aristocracy who were able to transform their feudal inheritance of land into capital and, thereby, find a common interest with the rising capitalist class of the 17th and 18th centuries.

At the heart of royal wealth is the Crown Estate, estimated to be worth £15.6 billion, consisting not only of land and property but also 12 miles of seabed around the whole coast, a nice little earner with all those windfarms paying rent. This portfolio is managed by a “household”, that is employees, of 400. After all its costs, the Estate hands over a “surplus” to the Exchequer, which then pays 25 percent of that sum as a “Sovereign Grant” to the monarch.

That, however, is not all, not by a long way. The Queen also inherited the Duchy of Lancaster, over 18,000 hectares of land and property with a net value of £653 million, the profits from this estate, £24 million last year, go directly, that is, untaxed, to the monarch’s account. That has now been inherited by the new King – without paying inheritance tax. For everyone else, that would be 40 percent of everything over £325,000.

On the other hand, Charles has had to hand on the Duchy of Cornwall to his son, the new Prince of Wales. The Duchy consists of 130,000 acres of land with 260 farms and a holding of £92 million in financial investments. In all, it is worth £1.05 billion pounds and last year showed a profit of £23 millions. The Duchy is not liable for inheritance, corporation or capital gains taxes.

The idea that anyone with those holdings is “above politics” or is representative of “the nation” is clearly ludicrous. Nonetheless, it is this huge wealth that is the material basis for the supposed “neutrality”, the “political impartiality”, of the British Crown. The monarch, we are told from infancy on, is only allowed to “advise and influence” the government of the day. However, since the government of the day is committed to the defence of the interests of big capital, why would one of the biggest of all capitals need more than that?

The monarch also has the advantage over any government that all official papers and reports have passed through his/her office. Unlike governments, which are not allowed access to their predecessor’s papers, the monarch or, more likely, their officials, knows the prehistory of policies and proposals, not to mention the power to “advise and influence” every person and agency of any significance in the UK.

We should not forget that behind all the flummery and ridiculous costumes there is a very effective state machine. Not only the government and the “King’s First Minister” but the armed forces and the judiciary owe their allegiance not to the “nation” or “the people” but to the monarch. That is the “constitutional” basis for the monarchy acting as the long stop for the parliamentary system which, despite its own checks and balances is open to some popular influence. Should that threaten the interests of the ruling class, the monarchy can be relied on to override any democratic niceties and impose its own law and order.

Whether the RMT’s Mick Lynch and CWU’s Dave Ward really felt they ought to suspend action out of respect for the nation’s loss, or calculated that the media onslaught on them, and their members, would seriously jeopardise the future of the pay campaign, we may never know. What we do know is that the campaign has been demobilised, the ideology of national unity has been strengthened and the new government of Liz Truss has been handed a couple of weeks to stabilise their rickety administration.

One lesson we draw from all this is that we need unions and a political party that can stand up to such pressures. More fundamentally, to make sure all the wealth of the country is used in the interest of society as a whole, indeed humanity as whole, since so much of it was stolen from around the world, we need to rid it of the whole apparatus of inequality, unrestricted privilege and fawning officials that currently control it.