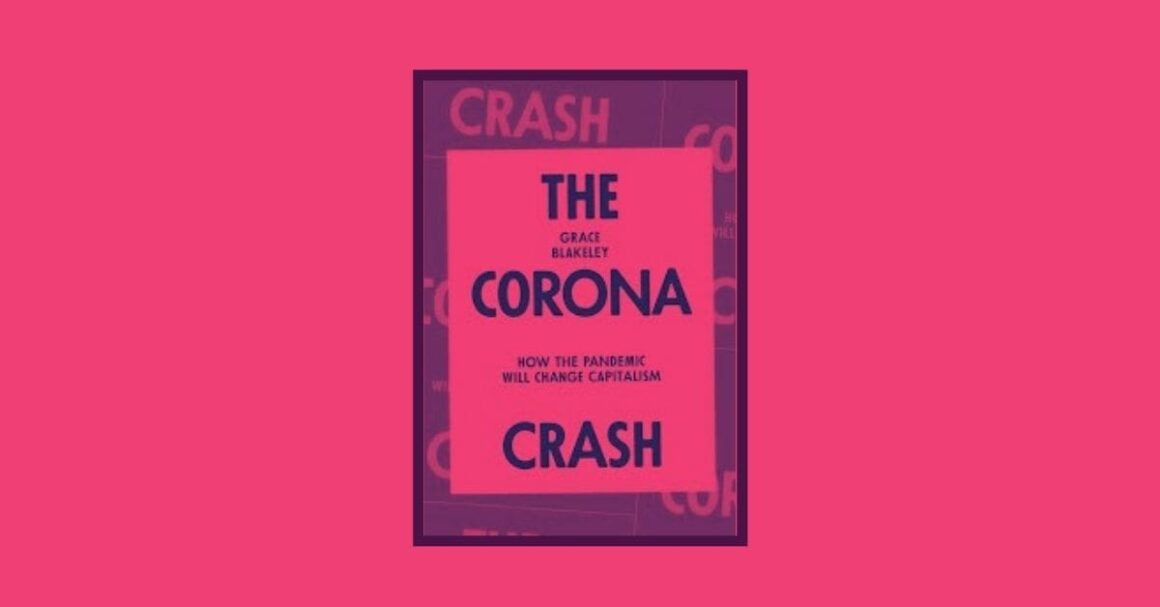 Grace Blakeley’s book is presented as a “preliminary attempt to understand the political economy of the pandemic”. “The world has entered a new phase of capitalism”, we are told, “state monopoly capitalism”. State intervention and ownership, not just of failing companies but giant monopolies, will become the new normal. This will engender planning, not just within companies and banks, but between monopolies and countries, as financiers, bosses and politicians have increasingly “identical interests”.

This, she believes, will offset the need for a new round of austerity to pay off the debts created by the pandemic, as workers’ consumption levels are necessary for the plan. A Global Green New Deal will emerge as the way to grow the economy, clean up the planet and level up the global south.

This will not happen without struggle, but socialists must set new goals: to “democratise” the state alongside state-owned and subsidised companies; to demand more nationalisations and progressive priorities for the plan; and to fight for a new, fairer, deal for the semi-colonial world.

This is Blakeley’s main thesis. It is wrong both theoretically and politically. Theoretically, it mistakes a short term, emergency measure for an enduring change within the capitalist system. Politically, it disarms the working class by suggesting there will be no attempt by capital to take back the subsidies and credits it was forced to concede by the pandemic.

The starting chapter summarises Blakeley’s understanding of the “financialisation era”, the focus of her 2019 book Stolen. This theory claims that the period of neoliberalism was characterised by the growth of financial markets and activities that transformed states, firms and households, “financialising” them while squeezing out productive investment and piling up debt.

Michael Roberts has exposed the flaw in her argument: “Blakeley ignores this most important scientific discovery (as Engels put it), namely surplus value. Instead, Blakeley… dismiss[es] Marx’s view that profit comes from the exploitation of labour… modern capitalism is now ‘financialised capitalism’ that gets its wealth from stealing or the extraction of ‘rents’ from everybody, not from exploitation of labour… leading her to believe that returns to capital have been inexorably falling…”.

For Marxists, production, through the exploitation of labour to produce surplus value or profit, is the basis for capitalist accumulation. The profit motive drives capital accumulation and the system’s development. But the accumulation of capital also tends to reduce the rate of profit, as more capital is spent on technology and resources (fixed capital) compared to labour (variable capital or wages), which is the source of profit.

Neoliberalism was a programme of policies to reverse falling profitability from the 1970s onwards. These ranged from stripping back labour rights to privatisation and financial deregulation, alongside union-busting and sectoral restructuring. For Marx, the landlord’s rent and banker’s interest were deductions from surplus value, not sources of it. Financial speculation or state subsidy both represent symptoms, not causes, of low profitability in production, a means to temporarily and partially offset it.

Like all financialisation theorists, Blakeley interprets other aspects of the neoliberal, globalisation period of capitalism up to 2008 as financial phenomena, distorting them. But privatisation isn’t a feature of a “financialised state”; privately run hospitals, train lines or Royal Mail are not financial operations. Even in Britain, the most financialised of the major economies, the financial sector only accounts for 6.7% of economic output, a fraction compared to manufacturing and services.

Conversely, much of the global mergers and acquisitions boom since the 1990s is an expression of the drive to build global monopolies, supposedly one of the characteristics of the new era. Unlike a Marxist understanding of the cyclical character of capitalist accumulation, which gives rise to different features, Blakeley’s “modes of accumulation” theory loses sight of the underlying continuity by presenting transient features as qualitative changes.

Of course, it is true that Boris Johnson and Rishi Sunak have poured billions of pounds into companies that would otherwise have gone bankrupt but that was not because capital has developed a new “mode of accumulation”; it was an emergency measure to cope with a lockdown that had stopped the circulation of capital. This is the same Tory party that “got Brexit done” so that it could deregulate the British economy and increase the rate of exploitation of British workers, and they will return to that programme as soon as they can.

Blakeley, however, gives us a false picture of a developing “state monopoly capitalism” where the state fuses with monopolies and banks, arguing that “we are living in a planned economy” already:

“The increasing interpenetration of big business and capitalist states promises to define a new era of state monopoly capitalism, in which the interests of leading politicians, financiers and corporate executives align to such an extent that they come to resemble the ‘general cartel’ posited by the Austrian economist Rudolf Hilferding in 1910.”

Blakeley’s claim that “Lenin built on Hilferding’s work” is misleading. He did indeed take up Hilferding’s analysis of the fusion of industrial and banking capital to form “finance capital” but he certainly did not accept the idea that this could lead to some kind of harmonious “general cartel”.

With regard to monopolies, Lenin recognised they could suppress competition in one sphere or national economy, but only to reproduce it even more violently at the international level. He drew the conclusion that the new epoch of capitalism, imperialism, signified an “epoch of wars and revolutions,” not of peaceful development.

In the period ahead, deepening imperialist rivalry points to instability, crises as well as revolutionary possibilities. Blakeley does mention China, but only to note that it avoided a serious recession in 2009 and played a significant role in pulling the world economy out of a depression. She ignores completely the obvious consequence of China’s rise to such a powerful position: the hostility of the USA which, already under Obama, had begun the “pivot to the Pacific” to counter this threat to its world dominance.

Her chapter on “the new imperialism” shows 40 per cent of “low-income” countries were already “in or approaching debt distress” before the pandemic, which then sparked the “the biggest capital outflow ever recorded”. Although G20 financial ministers have allowed a “pause” in debt payments, the effect of the corona crisis will be to “deepen these relations of imperial extraction”.

However, the international reforms she puts forward – debt cancellation and other economic relief to allow “state-led development” – are to be bestowed from the outside, by “international efforts”. In other words, by imperialist reform, rather than by workers and farmers taking matters into their own hands, repudiating the debts and seizing the multinationals’ assets.

Grace Blakeley’s concluding chapter, Reconstruction, warns the left against gearing up for a major battle against austerity and mass unemployment. First, she says, these battles have already been won and second, since we are already living in a “planned economy”, a Keynesian reflation of the economy has “clear advantages for British capital” and will therefore be adopted.

This is all wishful thinking. There has not been a radical wave of nationalisation in response to the corona crisis; the strategy has been to supply liquidity or bail out the major, stricken industries with loans. Loans have to be repaid. Blakeley can only point to Alitalia and the British train operating companies as examples of nationalisation.

These were emergency measures to prevent bankruptcy leaving the economy fatally scarred by the corona collapse. Despite what Blakeley says, Johnson’s government has made it clear that furlough will not be extended indefinitely. Her claim that after 2008 “many more people lost their jobs” is already false and, when furlough ends, many of the 8 million furloughed workers will join them.

Capital may demand subsidies to bail it out but will fiercely oppose any proposal for nationalisation. The only source of value that can relaunch profits and pay down UK debt is labour extracted from workers here and abroad. This means austerity at home and growing international rivalry.

Equally, Tories have already signalled how they intend to recoup this by cutting back Universal Credit and a partial public sector pay freeze, while the financial press discusses how to pay down the historic public debt (£2.2 trillion or 99% of GDP, the highest since the early 1960s). The council funding crisis, now reaching breaking point with corona demands, and the current attacks by Rolls Royce, BT, and British Gas on their workforces, all show that the giant monopolies themselves are under pressure, not just fragile small businesses or “zombie companies”.

Her arguments that national debts can and will be rolled over, that rising wages and jobs can be maintained without the suppression of profits or that the Green New Deal is both an economic and environmental panacea that will pull a re-ordered capitalist world order through are all utopian dreams.

The truth is that there will be a struggle over who pays for this crisis, not a coordinated plan which leaves everybody richer. Imperialist bankers, CEOs and politicians will fight to impose their solutions against rival powers, against the semi-colonial world and against their own working classes.

This will entail some debts being called in under threat of imposed austerity. Most public services will not be “built back better”. Elements of international cooperation have occurred during the health crisis and may do so in relation to climate change, but the recent wrangling over vaccine supplies shows how quickly this can evaporate.

Blakeley’s response to state monopoly capitalism, with its powerful “oligarchy”, is pitiful: “the challenge for the Left will be to hold them to account”. Stolen proposed a series of democratic socialist structural reforms enacted by a left Labour government which never materialised. The Corona Crash implicitly does the same, but with Bidenomics in place and no Labour government for at least four years – and then under Starmer!

Blakeley’s new book, then, is worse than wrong; it is dangerous. It smoothes away well-based anxieties about a coming day of reckoning, rejects any need to muster forces to fight austerity and unemployment, justifies passivity with the illusion of an alliance with a section of the imperialist bourgeoisie willing to take the Keynesian road. In short, it disarms the working class in its moment of peril.

The unspoken political conclusion to this is more clearly spelled out in the new programme of Blakeley’s Lexiteer partners, the Communist Party of Britain: a new popular front. It is a thoroughly nationalist strategy, which ignores Britain’s real role in the world and, instead of world revolution, posits the prospect of a series of individual state capitalist nations gradually realising that they would be “better together”.

For all the Marxist jargon, Blakeley’s “reconstruction” is just thinly veiled Keynesianism, with no mechanism proposed to achieve it outside of the ruling class itself, cleansed of its more voracious elements. We don’t need to “democratise the state”; we need to smash it.