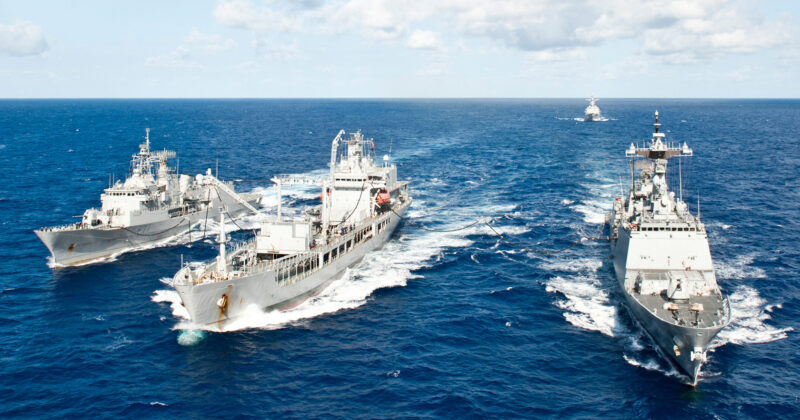 Aukus is an escalation of inter-imperialist rivalry

The Aukus security pact between Australia, the UK and the US represents one of the most dramatic moves yet taken by the United States to counter the threat to its interests posed by its largest imperialist rival, China.

It also represents a brutal snub to France and by extension to the European Union and its Nato Allies, none of whom had been consulted. Finally it underlines a further turn by Brexit Britain away from its former EU partners towards a geostrategic re-alignment with America.

The pact is also one of the clearest demonstrations yet of the weakening of the American hegemony that was established at the end of World War II, and of the growing tensions not only between but within competing imperialist blocs. As the precipitate US exit from Kabul showed, Joe Biden’s multilateralism is more a matter of words than deeds.

The biggest shock was felt not in Beijing but in Paris – America’s oldest ally. An agreement France had with Australia to construct its next generation of attack class submarines has been junked without warning. Incandescent with rage France withdrew its ambassadors from Washington and Canberra ‘for consultations’. French Foreign Minister Jean-Yves Le Drian confessed to feelings of ‘anger and bitterness’ towards America, protesting, ‘this brutal, unilateral and unpredictable decision reminds me a lot of what Mr Trump used to do…this isn’t done between allies’.

The pact is ostensibly aimed at developing and deploying a fleet of Australian nuclear powered submarines in the Indo-Pacific. These submarines are far harder to detect and much faster than conventionally powered vessels. Stationing such a fleet in Australia will bolster US attempts to counter China’s growing dominance in the region and its military and naval build up. However, the deal goes much further than this, envisaging collaboration on a wide range of military issues, including cybersecurity and artificial intelligence.

The signatories to the pact are hoping to counter the growing maritime challenge posed by China. China’s navy has been modernised and has overtaken those of Japan, India, and Australia. It now directly contends with America for naval dominance in the region. America and Britain are growing concerned about China’s increasing ability to harm their imperialist interests in the Pacific.

Despite being a major trade partner of China, Australia is also becoming worried about China’s increasingly threatening behaviour, including the construction of naval bases on man-made islands in the South China Sea. However, although Aukus will massively increase Australia’s naval capabilities, there are strings attached – Australia has now firmly sided with the US in any future conflict with China. A senior US official described the agreement as ‘a fundamental decision that binds decisively Australia to the United States and Great Britain for generations’.

The Chinese government has condemned the agreement as ‘extremely irresponsible’ and has stated that it ‘intensifies the arms race’ – as indeed it does. The Global Times, a Chinese state-backed publication, has gone so far as to say that Australia has ‘turned itself into an adversary of China’ and that ‘Australian troops are most likely to be the first batch of western soldiers to waste their lives in the South China Sea’.

Fundamentally, the Aukus pact is yet another escalation of the inter-imperialist rivalry and arms race between the great powers – primarily China and the United States. The resulting friction between France and the US also lends weight to the arguments of those within the EU calling for a European Defence Force, such as EU President Ursula von der Leyen,who used her ‘state of the union’ speech to urge Europe to develop its own defence capacity.

That road can only lead to the formation of a new imperialist rival to the US and a further escalation of tensions. Increased US unilateralism, under Biden as well as Trump, is a factor pointing towards a future Transatlantic rivalry between the US and EU. This will pose hard choices for ‘Global Britain’, which has firmly aligned itself in the US camp, just as the EU might be drawn closer into China’s orbit.

The power of the United States is certainly waning, but it is still by far the most developed imperialist power with enormous military as well as financial capabilities. However, as China grows in strength and America wanes, the threat of open conflict between the two powers and their allies grows. A conflict between the great powers and their allies threatens unimaginable destruction and loss of life – even leaving aside the risk of escalation to the use of nuclear weapons. It is therefore vital for socialists in the rival imperialist states to organise a movement against the mounting arms race, against new military alliances, and to turn conflict between nations into a conflict between classes. Workers Power stands for the immediate and unconditional withdrawal of all British overseas forces.