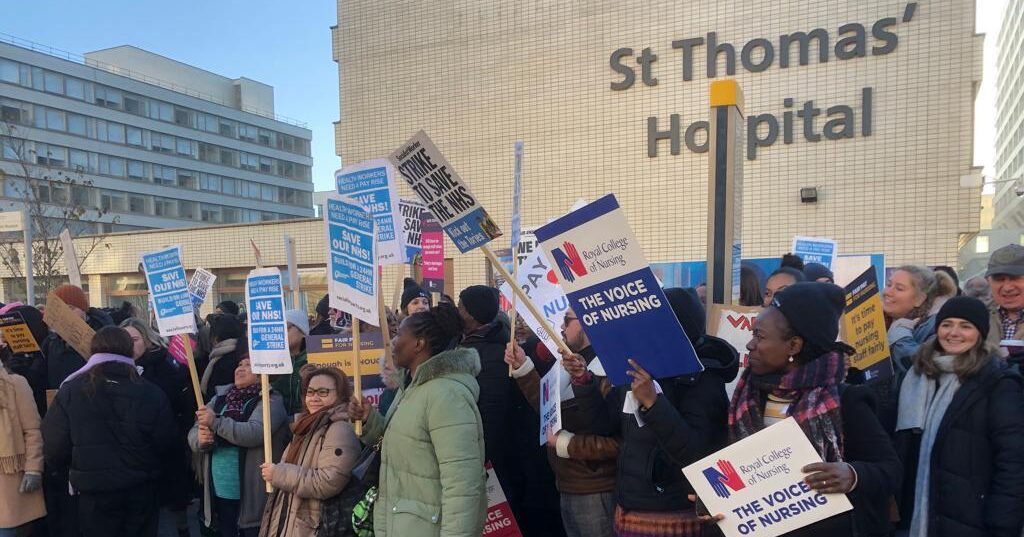 All out to save the NHS

The government has picked a fight with nurses because if it can beat them it can hold public sector pay down and continue NHS privatisation.

The Royal College of Nursing (RCN) is taking strike action on 15 and 20 December in the largest nurses’ strike in UK history. After more than a decade of underfunding, health workers have seen their pay, conditions and staffing levels deteriorate to breaking point.

Nurses have lost more than 20% of their real-terms pay since 2010. The government says the RCN’s claim for inflation plus 5% (19%) is ‘unreasonable and unaffordable’. But during the pandemic, the government squandered £8.7bn on corrupt PPE contracts for their cronies, and the wealth of Britain’s billionaires soared by 25%.

The government insults nurses when it appeals to their sense of vocation. During the pandemic, health workers faced death and debilitating illness to keep the NHS going. Unpaid overtime and working through breaks were the norm. Even before the pandemic and cost of living crisis, nurses were resorting to food banks, opting out of pensions and working unsustainable levels of overtime.

The NHS is not a charity. It is a public service which the Tories are trying to destroy by running it down and driving tens of thousands of skilled nurses out of the profession every year.

The crisis in the NHS has to be laid firmly at the door of the government. That’s why this strike is about more than pay. It is about the survival of the NHS—and public services and the welfare state in general.

How nurses can win

Nurses face an uphill struggle. The government is refusing to negotiate over pay because it wants to blame strikes for the NHS crisis this winter. The Labour Party is not only refusing to support the nurses’ legitimate pay claim—Keir Starmer has actually opposed it, saying it is ‘too high’.

The undemocratic anti-union laws mean hundreds of thousands of workers are blocked from taking legal strike action because their trusts did not meet the 50% turnout threshold. Now Jeremy Hunt has refused to rule out including nurses in proposed plans to outlaw strikes in some public services completely.

The RCN has compounded this by only calling out around half of the trusts that did meet the threshold, meaning large numbers who can legally strike are being prevented from doing so by the union leadership.

In Scotland, some unions have already accepted below inflation pay increases. In England, some union leaders have used the Scottish settlement of around 7.5% as a benchmark for negotiation with the government. The RCN offered to ‘pause’ strikes in return for negotiations. Workers should be clear—the leadership has no mandate for this.

We need the most effective action, an all-out indefinite strike, as quickly as possible, to fight for the full claim.

Solidarity from the wider labour movement is key to piling the political pressure on the government. The two days of action must be turned into nationwide demonstrations of solidarity with the health workers. Trade unionists should support all the picket lines and organise tea time demonstrations after work in the city centres.

But at the same time, health workers need to fight for control over their dispute and not leave the strategy and negotiations in the hands of the union officials.

Regular protests (for example every Thursday) could support reballoting campaigns by bringing together members of the many NHS unions in a joint campaign. In tandem with this, workers should set up democratically elected strike committees to ensure the different unions stay united and that workers themselves decide when to strike, and for how long.