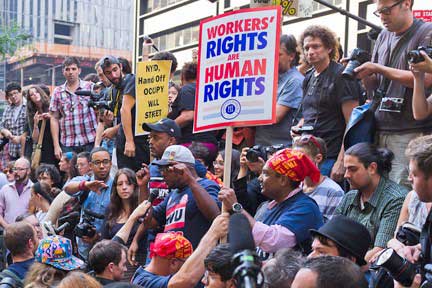 THE FIRST day of April witnessed an important victory for US workers. An official ballot for union recognition won a majority of workers (2,654 for, 2,131 against) at the huge JFK8 Amazon warehouse on Staten Island, New York City. The first Amazon facility where workers have won union recognition after dozens of attempts elsewhere, this is even more impressive given the huge staff turnover—150% a year—due to the terrible conditions, crippling work, lack of breaks and high accident rates. These are truly the ‘dark satanic mills’ of the 21st century, owned by America’s second richest man Jeff Bezos, worth around $200 billion.

The JFK8 victory was won by a union, the Amazon Labor Union (ALU), that originated in the plant itself, independent of the big AFL-CIO or Change to Win federations. Against the Amazon Goliath, the ALU was formed in 2020 by Chris Smalls, an Amazon worker sacked for leading protests against its appalling COVID-19 safety conditions. A team of JFK8 workers, rather than the usual ‘experienced’ professional union organizers, led the drive, ‘talking union’ to their workmates, phone-banking and using social media.

However it is important that the big unions’ locals (branches)—UNITE HERE Local 100, Communications Workers Local 1102, Food and Commercial Workers (UFCW) Local 342, plus the Coalition of Black Trade Unionists—gave support. Hopefully, the success of rank-and-file organizing can spread to the bureaucratic big unions, helping to democratize them and winning them to more militant action.

The empire strikes back
On 2 May a ballot of the 1500 workers at a second Staten Island warehouse, the LDJ5 sortation center was lost (618 against, 380 for). A defiant ALU responded: ‘The organizing will continue at this facility and beyond. The fight has just begun.’ And Amazon is challenging the original decision at the larger JFK8 facility, a hearing that will take place in Phoenix on 23 May. Meanwhile a unionisation ballot at the Amazon facility in Bessemer, Alabama is stalled with 416 contested ballots, which could see the narrow lead of 118 against unionisation overturned. Part of the reason for the ALU’s success in New York was its 27% unionization rate compared with just 6% in Alabama.

It is a tremendously encouraging sign that workplaces designed to evade union organization, where managements spy on their workers and weed out ‘troublemakers’ in a near totalitarian manner, are beginning to organize and fight back.

Recent opinion polls show that almost 50% of non-union American workers say they want union representation; yet many states’ laws make it enormously difficult to win recognition and a union contract. A major change in the country’s virulently anti-union laws is essential if these workers are to have any chance of organizing.

A charter of labour rights, including union representation in every workplace, a union contract, the right to take strike action whenever workers vote for it, needs to be drawn up and all unions, great and small, pledged to fighting for it. It must include a commitment to racial and gender justice in hiring.

But only class struggle on a scale as big or bigger than that seen in the 1930s, can bring this about. Workers trying to unionize their prison-like workplaces need militant solidarity from other workers and their surrounding communities that spreads nationally and internationally, especially in the case of great multinationals like Amazon.